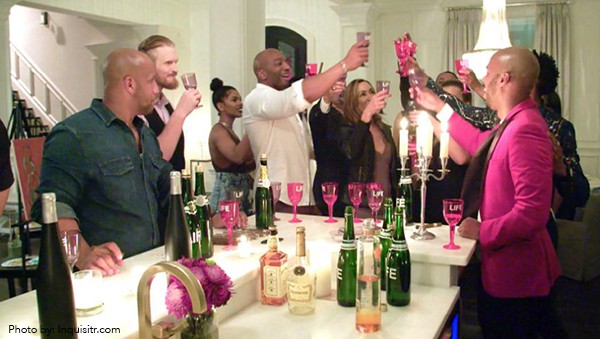 As a southerner, I can honestly say that after watching Southern Charm New Orleans, I think I’ve been southerning wrong. Apparently, we like to fight. We’re all about being right. You’re wrong, don’t even argue. Everyone wants to be us, and don’t even try to say otherwise. If you don’t think like this you’re a failed southerner, at least according to Southern Charm NOLA.

Yes, now that we’ve met the cast we can all learn how to get it right.  First, I didn’t know that as a southerner I needed to have an arch nemesis who wanted my life, probably because I have a hard time even wanting to be me. Tamica taught me otherwise. Let’s take a step back.

Apparently, Barry Smith (Tamica Lee‘s husband) actually does have a job. He owns a gym and is a personal trainer. “That’s why Tamica has a banging’ body!” No, she doesn’t train with Barry. But Gian does. Yes, Gian is a woman who Tamica shared a debutante thing with (I’m not that southern) back when they were about 16-years-old and now Tamica thinks Gian wants her life. Why? Well, Gian trains with her husband, is on the board of a charity her brother owns (Son of a Saint), and is now friends with Jon Moody. Is she a clone or what?

While Tamica is worrying about getting Single White Femaled, Reagan Charleston is worrying about her jewelry fashion line, school, and moving into an apartment without her husband. Yes, Legally Blonde owns a jewelry line inspired by door knockers, and while she develops this line she’s also focusing on school, which is why she needs her own apartment and her own space. Unfortunately, her husband Jeff Charleston was unaware that he would not be accompanying her and now he’s sad that she’ll be moving into the French Quarters without him. In her defense, school is paying off; while walking her dogs one of them poops, prompting Jeff to dig in the trash for a bag, which is legal according to Reagan. So yeah, get off her back. Eventually, he brings up his feelings and how upset he is that she’s moving to the apartment without him, to which she responds that he needs to go to therapy. They’re doing great.

Other than that, the only other thing that happens is Jon Moody, the painter, has a boys night party. But not just any boys night party, you understand. He sets up a painting party that involves nude models because he wants to make his married friends not be married anymore. He words it differently but that’s pretty much it. Also, he’s about 15 years younger than the rest of the men, so I’m starting to believe his sole purpose is to break everyone up.

While they’re having their boys night Reagan and Tamica are having a girls night dinner: a dinner that consists of Tamica telling Reagan it’s wrong that she’s moving into her own apartment, prompting Reagan to remind Tamica that she separated from Barry for a while and to quit projecting her problems onto her. It was a great use of her lawyer skills except Tamica left because she had postpartum depression, and not because she was selfish like Reagan. Anyway, they agree to disagree and then start talking about how they track the husbands that they love and trust. Turns out they didn’t need to; at one point Barry sent a text to Tamica describing the scenario they were in which prompted Tamica to call it a night and have a driver take her and Reagan to the party.

Tamica and Reagan show up and it’s a sh*t show, as Barry’s text described it. There are girls everywhere, Jeff is wasted, and it’s actually not a sh*t show because that’s all that was happening. Tamica immediately begins fighting with Jon about his party and the women he invited, prompting some of those women to leave. Meanwhile, Reagan is drunkenly yelling at Jeff, who is also drunk, so this will end very well. Actually, that’s how this show ends: Tamica and Reagan are yelling at people who have done absolutely nothing to them, probably because there was nothing else happening.

Listen everyone, I’m trying my best, but nothing is happening on this show. At one point  I almost shook my television to get them moving. Fortunately, it’s mounted so I couldn’t. These people have boring problems and what’s worse, they’re probably not made up. But we’re only in episode two so it should get better, IT HAS TO.

Do you think it will? What do you think will happen next week? Will Gian become a main character in the form of Tamica? COMMENT BELOW!