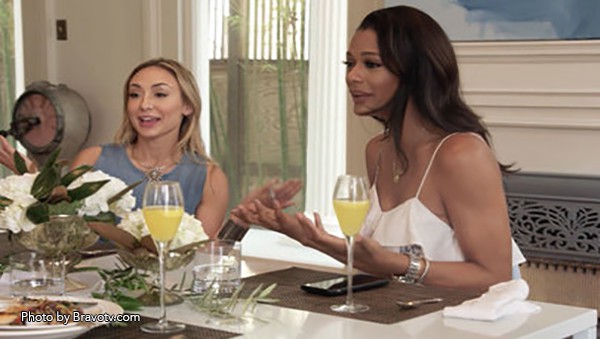 OMG. So, we’re moving. Everything that can go wrong, has. Our gutters clogged in the middle of spring. Our dishwasher, after not being used EVER, decided to fill with water. Every time I packed a box, more things appeared, like we’d been cursed with never-ending things. Crazy, yes? As crazy as this week’s Southern Charm: New Orleans? Wwweeellllll……

No, it wasn’t. Do you want to know what happened on this week’s episode? They fought about things that happened in the last episode, just like they did in the episode the week before. Christ.

In a nutshell – Barry Smith used a discriminatory slur during his fight with Jon Moody‘s friend (I didn’t hear it or even think he said anything so I’m guessing neither did you) and so, yeah. Also, everyone is still p**sed at Tamica Lee for causing arguments over nothing. Well, I say it’s nothing; Tamica says people are p**sed because she spoke the truth.

The truth, you ask? Oh, she’s talking about calling out Reagan Charleston‘s marriage and Justin Reese‘s lack of commitment to Kelsey. Out of line, right? Not for Tamica. Her friend, Nicelle, has a brunch party for no other reason than they needed a setting for Tamica’s takedown, but Tamica isn’t having it so when Rachel starts telling Tamica how wrong she is, Tamica leaves.  Tamica calls Barry to tell him what the girls were saying, but SURPRISE!, the guys had just finished getting after him for using a discriminatory slur that we didn’t even know he had used.

We may not have heard it but Gian did – she has lunch with Barry and basically fires him from her projects because she doesn’t want people to think she’s a homophobe like Barry isn’t.

Later, Nicelle has a party on a swamp boat. I assume the point is for everyone to get along but it turns into a PSA and I guess this is Jared’s introduction to the show. Jared talks about his struggles with the words we still haven’t heard Barry say, and then everyone cries and Barry agrees to never say the word that some people may still not have heard.

Other things that happened are Justin has an electrical engineer inspect his parents’ home, and while it’s falling apart they’re still going to fix it for him.

Then, at a separate party, Rachel tells Reagan that if she moves into the French Quarters without her husband it’ll be a huge mistake and they’ll get divorced.

THE END. I don’t even want to ask you what you think. Instead, I’ll just ask if you agree with me. Do you think this show will only last a few more episodes before the producers wake up (literally) and cancel it? I do. Comment below!

Be the first to leave Comments for Southern Charm NOLA Recap: Alligator Tears