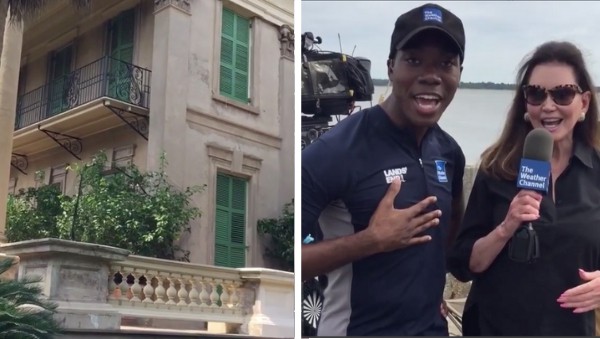 One would think that the news of Hurricane Florence would cause someone to run for the hills, but apparently Southern Charm star Patricia Altschul is not easily shaken. The 77-year-old matriarch took to social media to show off her hurricane prep, despite numerous warning by public officials to evacuate the area.

Patricia first took to social media on September 10th, where she showed off her pre-Florence haul with her butler Michael.

She also showed off her boarded-up Charleston mansion.

And it appears that Whitney Sulder-Smith will be staying with him mom. Patricia also posted this video of Whitney jamming the song “Rock You Like A Hurricane” on his guitar.

She even got some screen time on The Weather Channel!

Patricia seems to be the only member of the SC cast who’s keeping close to home despite South Carolina Gov. Henry McMaster telling his constituents,  “If you’re going to leave — and you should leave, if you haven’t left yet — you should leave now. … time is running out.” And according to CNN, officials reason that even though Florence has been downgraded to a category 2 storm, that doesn’t mean it won’t be deadly. The storm will still exhibit deadly storm surges, coastal flooding and rainfall is expected inland.

Is Patricia crazy for staying behind? Sound off in the comments.