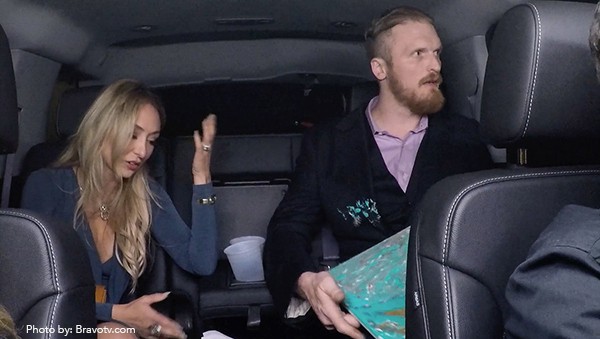 Good evening, everyone! Welcome back to the world’s biggest yawn. On tonight’s episode, we open with a continuation of the fight from the week before: Reagan Charleston and Tamica Lee are still p**sed about not being invited to the boys-night-out party and if they’re not happy, nobody is. The husband’s finally leave, Jeff Charleston makes sure to bring his painting. Afterall, this was a painting party, Reagan. As they leave, Jeff realizes he left his jacket behind so they go back to the party to get it. Jeff and his painting get his jacket and when he gets back in the car, it goes down. Reagan calls him rude, tells him he drinks too much and is worried, then tells him she’s going to school and taking care of their family, flipping his painting on him and prompting him to Hulk-out. That’s. It. She tells him she’ll clean it, to which he responds by reminding her she can’t even iron a shirt. He continues by saying he’s done nothing wrong and that she needs to quit trying to make him out to be the disabled football player she wants him to be. He asks to be let out of the car and the runs, RUNS, away from her and everyone else. Reagan texts Tamica and her and her husband, Barry Smith, head over to them to try and help the situation. Reagan is sobbing in the car, Barry chases Jeff down, and eventually, everyone goes to a home.

The next day, Barry tells Justin Reese about the incident while Reagan heads over to the condo where Jeff has spent the night. She does her part to help fix things by calling him a busted-ass Chip and Dale dancer, to which he responds with an apology, acknowledgment that he needs help, and that’s about it. Later that night, Reagan shows up at Tamica’s to talk. Tamica tries to bake cookies but apparently doesn’t know exactly how that works. They sit outside and Reagan tells Tamica that he needs to go to counseling; Tamica agrees and tells her that Jeff needs help. Reagan asks how Tamica and Barry worked things out and surprise! It’s because they have kids, something Jeff and Reagan do not have.

While Reagan cries to Tamica, Jeff shows up at Barry’s gym. Barry tells him that when he drinks he’s like two different people, and now Jeff is upset that when he gets mad he’s a different person and just maybe it might have to do with his head injuries sustained during his football career. And that was the end of the world’s most boring fight.

Are you still awake? Stay with me! We’re almost done.

Other things that happened were Barry met Gian for lunch and she’s going to help him build his business. Tamica isn’t jealous AT ALL. Shut up, she’s not.

Reagan throws a party in the Warehouse District promoting her jewelry line, which was going great until Tamica tried to make this show more interesting by questioning Justin and his commitment to his girlfriend, Kelsey. “Is she the one?”, she asks for no reason other than she’s drunk. His answer is vague, which is all Tamica needs. While in the middle of trying to create a storyline, Kelsey walks in. Tamica tells her what they were talking about, making sure to tell her that based on Justin’s response, she’s not the one for him. Reagan is conveniently positioned next to them and overhears the conversation, prompting her to put an end to it, reminding everyone it’s her job to make sure her guests are comfortable. Tamica excuses herself and takes her drunkness elsewhere, particularly to Jeff and Nicelle, asking them if she’s making them uncomfortable. The answer is yes, and also you’re making me uncomfortable and the other tens of people watching this show.

Because this isn’t uncomfortable enough, Jon Moody pulls Tamica aside and tries to resolve the fight I thought was over 40 minutes prior. I was wrong. It wasn’t over. Tamica is still upset she wasn’t invited to his party, resulting in Jon’s friend calling her insecure. As expected, nothing gets resolved and as Jon and his friends begin to walk away, his friend calls her insecure again, then tells her she looks like a parrot. Well, let me tell you, only Barry is allowed to tell her she looks like a parrot. He chases Jon’s friend out, pretending to start a fight with him, while Jon’s friend keeps repeating that he’ll sue Barry. Barry isn’t dumb, and also there are cameras around. As you probably guessed, nothing happened.

Do you think more things will happen? Like, I don’t know, Tamica will try and cause problems? Reagan will divorce her husband, which was the real reason she got that bachelor pad? That’s all I got. Comment Below!

Be the first to leave Comments for Southern Charm NOLA Recap: 50 Shades of Cray