Southern Charm NOLA Recap: All About The Bunny Hunnie 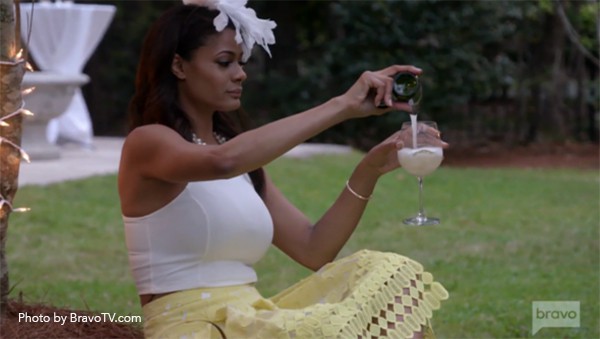 I’m from a border town, part of a family with family members who sometimes like to fight. When I was 16, my parents moved me, my brother and sister out of the hood. Rather than write a rap song about it we hosted a party on Easter. While hitting the piñata, one of my cousin’s cut in front of another cousin, setting off the sister of one of those cousin’s, resulting in one of my aunt’s and cousin’s fist-fighting. Cameraphones and YouTube didn’t exist back then so you’ll just have to envision it. Interesting, yes? Want to read more? Too bad, this isn’t about me. We’re talking about another Easter party.

After three weeks of alone/school time at the French Quarter, Reagan Charleston has returned to her actual home. Feeling renewed she decides it’s time to throw a party, and just in time for Easter. Jeff Charleston is on board because he just wants things to go back to normal, and apparently normal is a party.

However, a celebration cannot occur until we talk about Tamica Lee for a bit. She has a stomach virus so her friend Susan stops by with some soup. This turns into Tamica discussing her failure as a wife and mother, as Barry Smith isn’t happy with how their daughter is feeling due to Tamica’s behavior. However, before you hate Tamica, it turns out it’s not her fault. Tamica’s daughter created SIMS characters (or at least that’s what I thought they were) who are not exact replica’s of Tamica and the family, which prompts Susan to suggest Tamica and her daughter have color dysmorphia. Because I don’t know how SIMS characters work, I have no argument.

Meanwhile, Jeff is shopping for the party. Did you know Jeff is a cheese connoisseur? Neither did I. While choosing cheese’s, Justin Reese shows up and they taste wine together. Being a lawyer himself, Justin knows what Reagan is going through. Jeff, on the other hand, wants to spend more time with Reagan and eventually have kids and raise a family. Since Reagan is the lawyer, who do you think will win?

They’re not the only ones trying their best to have a crisis. Barry is working out with one of his friends, and while he has clients that have been with him for years, one in particular is really affecting his feelings. Gian, who is working with Jon Moody on his upcoming show, hasn’t worked out with Barry in weeks and has basically cut off all contact. Tamica, who originally hated Gian and her affiliation with Barry, now has a problem with the fact that they don’t have the relationship they once had. So basically everything that involves Gian upsets Tamica.

Everyone prepares for the party. Barry learns how to tie a bowtie. Justin and Kelsey shop for a gift for the party when Kelsey stumbles upon wedding flowers. Justin isn’t trying to get married this season so he shuts down her dreams immediately – kind of like he has been for the last four episodes.

Eventually, all of the cast members make it to the party. Gian arrives and, of course, Tamica gets p**sed. “Who invited her?’ she asks aloud. The answer is Jon Moody. Not one to be uncomfortable alone, Tamica informs Reagan about the situation, then informs us that it’s ironic that Gian has found another way to resurrect herself in Tamica’s life, even though all of us sane people are well aware that’s not what’s happening. Tamica tells Reagan she’s going to confront Gian, Reagan requests she do it after dinner.

Reagan just happens to still be cooking dinner so she tells everyone to play the grown-up game she has set out: Croquet. Following suit from the golfing experience, Jon Moody sucks at Croquet. They then participate in an adult Easter egg hunt. Tamica finds alcohol and calls the hunt a day, then takes the fake ring she found and gives it to Kelsey since she believes Justin won’t give her one.

While Tamica is being a jerk about something that has nothing to do with her, Barry talks to Gian about their situation. As much as he apologizes, Gian can’t accept his apology and continue working with him. So, the end, I guess?

After the talk-that-results-in-nothing, everyone sits down to eat. Jeff gives a toast to new beginnings; Tamica interrupts with a toast to her own situation with her daughter. Now that Tamica is full of emotion, she thinks it’s a good time to confront Gian. The confrontation is awkward. I told Tamica/my television “listen, you either don’t like Gian because she’s involved with Barry or you don’t like Gian because she’s not involved with Barry. Pick one, it can’t be both.” She couldn’t hear me and the end result was basically Gian making Tamica feel there is something wrong in her and Barry’s marriage, silencing Tamica. Gian – 1, Tamica – 0.

Tamica begins to tell people about the encounter, telling Reagan that Gian is an opportunist and that she’s crazy – even though we all saw the same thing and it looks like Tamica might be up for the part of crazy. Good for Tamica, Reagan doesn’t care. She’s happy things are getting better with her and Jeff and, after everyone leaves, they have a moment and the end.

So, after this week’s episode, who thinks Jeff and Reagan will make it? Is Tamica out of her mind? Who would rather hear about my piñata fight story? Comment below!

Be the first to leave Comments for Southern Charm NOLA Recap: All About The Bunny Hunnie