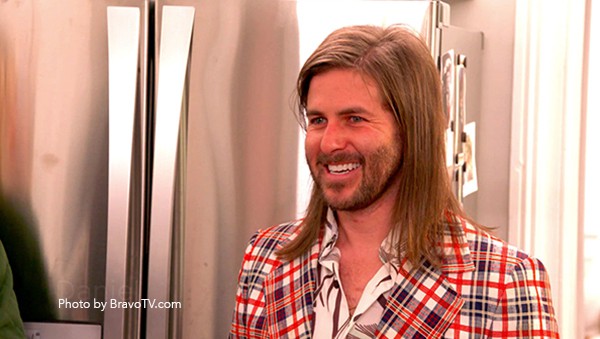 You know how sometimes you say or hear a word too much it starts to not make sense? That happened to me while watching this week’s episode of Southern Charm Savannah, except instead of it not making sense I now hate it and am currently trying to find a way to ban it from everyone’s vocabulary for at least a year. OK, not everyone’s, just Hagood Coxe – because if I have to hear her say the word ‘saké’ (or as she pronounces it, ‘SAHKAY’) one more time I’m going to start a petition that demands the FCC consider it a curse word and have it bleeped every time someone says it.

The point is, I hate the way she says it. Fortunately, it may be the last time we have to hear it, but we’ll get to that in a moment because right now she’s at the Worsloe Historic Site Park sketching Catherine Cooper for her portrait commemorating her southern charm. While Hagood sketches, they talk about the paintballing trip and how aggressive Lyle Mackenzie was afterward. Catherine is disappointed that Hagood didn’t come to her defense, but Hagood is a smart tomboy – she’s not trying to get involved in their mess.

While Catherine has her portrait painted, Louis Oswald has his socks photographed. He’s getting ready for a very important tradeshow and talking business when he receives a call from Hannah Pearson, telling him to basically blow off the work he needs to put in for the tradeshow and head to the Turks with her for her birthday, the exact opposite of what would make him the responsible adult she wants him to be. Naturally, he agrees, and then he gets back to his socks.

Now that she’s done interrupting his day, it’s time to not interrupt Catherine’s because Catherine doesn’t do anything. They meet for dinner and it’s awkward from the beginning. First, they awkwardly talk about having bruises from getting shot with paintballs, then Hannah brings up the awkwardness of Lyle being a dick. She wants Catherine to know that she’s not on Lyle’s side but does believe they’re both to blame. Catherine and her face disagree, to which Hannah replies by calling her out for dating someone else. Now it’s getting awkwardly good because Hannah won’t let it go. Side note: Hannah shouldn’t be designing dresses that look like squares with straps – she should be an investigator or a lawyer. If anyone else from the cast would like some career advice, you can find me on Twitter: _typicaljenn_. Anyway, Catherine keeps denying it, and her face keeps morphing, and she keeps touching her hair.. then finally, FINALLY, out with it. Catherine (who constantly says she was raised to keep things to herself but at this point, she’s just a liar) finally admits she’s been seeing someone else, BUT, still wants to marry Lyle. No, you don’t, Catherine, and neither does your face. Because Catherine is good at spinning her way out of trouble, she switches it on Hannah and tells her that Louis probably lying about wanting to get married.

If you’re wondering what Daniel Eichholz was doing this whole time, he was working on his bunches of businesses.

Hagood is also working on her bunches of businesses as she finishes Catherine’s portrait and prepares her saké for a tasting with the owner of a local restaurant called Atlantic. She checks in with her mom in what begins as an attempt to get her approval and ends with a PSA: pay your bills and be responsible. Did you get that, kids?

That PSA segue’s perfectly into the next segment: Catherine “I live off my mom and dad and I’m in my 30’s” pays Louis, who is at least trying to do something, a visit and kind of helps him get ready for his tradeshow – and by that I mean she puts a few socks on some mannequin feet but that’s too much work so she then decides to take a break and tell Louis what she told Hannah. Louis says he wants to marry her but doesn’t have $40,000 for a ring. Hang on… $40,000? Either Louis is exaggerating or Hannah needs quit wondering why no one has married her yet and lower the price on that bad boy.

Catherine’s work is officially done and she can now celebrate by planning her housewarming party. Her mom made cheese straws and I think that’s a sign that I should try and make some. Catherine finalizes her guest list and invites Lyle, who all but hangs up on her.

She isn’t the only one being crushed. The professional saké tasting didn’t go so well, as in the owner of Atlantic looked like he wanted to throw up with both batches. He tells her if she really wants to do this she needs to live in Japan for a year and really learn what it’s all about. Not being able to make that kind of commitment, she’s now questioning whether or not she should do this; both her mom and I agree that the answer is no.

Now that we don’t have to hear her say the word ‘saké’ anymore, let’s enjoy ourselves at Catherine’s housewarming party. Catherine’s parents arrive with party favors in the form of NEW PATIO FURNITURE. Brandon Branch arrives with flowers and after her parents leave, she starts telling him about what happened when she tried to invite Kyle, following it up with “I’m so over his s**t.” That’s the boring part of the conversation; the fun part is when she tells him she invited Ashley Borders. Unfortunately, Louis can’t make it because he’s too busy wheelin’ and dealin’ (I’m sure it has absolutely nothing to do with what Catherine said to Hannah), but who cares because Ashley will be there. The rest of the group gets ready and slowly begin to arrive. A bunch of her friends arrive but they’re not regulars on the show so who cares. Daniel arrives looking like a 1970’s used car salesman; Brandon says he looks like a bearded pageant lady. I think we’re both right. A drunk Catherine (or at least for her sake I hope she was drunk) does some sort of dance that may once have worked on Lyle but prompts the bartender to ask her if she’s ok. Ashley arrives and Hannah is not happy about it. Afterall, Ashley did tell Hannah she wasn’t a designer like her. Wouldn’t it be great if we were to one day find out that her design gig is just her selling that LuLulemon crap?

Anyhoo, Hagood talks about her saké conundrum and says she’s going to keep trying (nnnnooooooooooooo). Daniel, who I’ve now decided looks like Billy Ray Cyrus circa 1994, tries to have a serious talk with Catherine but she uses his hair as an excuse not to participate in the conversation. And then we’re back to Hagood. Everyone is nice and drunk so that means it’s time to get emotional. Ashley gets deep with Hagood, talking about the predicament she’s in with her parents: either run the farm and be rich or do something else and still be rich. Brandon calls her a people pleaser, which she agrees with because she cares about what people think about her – the perfect personality trait to have when you’re on a reality show. (Although, this does explain why she replied to my tweet commenting on her constantly referring to herself as a tomboy.) Following this conversation, she escorts her friend outside and starts crying about her problem, telling her no one will want to live with her or marry her. Look, I can handle “I’m a tomboy” Hagood. “Saké” Hagood is annoying but right now, I prefer that over “#firstworldproblems” Hagood.

Thus concludes another party that included someone crying, defeating the purpose of a party. The next day, Catherine and Lyle meet up for brunch. He tells her he’s been laying low and trying to get his head right, which includes needing some space from her. He tells her he’s sacrificed a lot for her and all she’s done is be selfish. Now, she’s really over it. She tells him she’s over him blaming her for everything and not taking responsibility for the things he’s done, AND THEN.. they break up for good… question mark.

Do you think they’re really broken up this time, which is the same question I asked like two episodes ago? Will Hannah and Louis be the next to call it a day? Will Hannah quit whining about having opportunities? Also, let me know if you want to see a screenshot of the tweet I mentioned earlier! Comment below!

Be the first to leave Comments for Southern Charm Savannah Recap: Sorry, Not Sorry