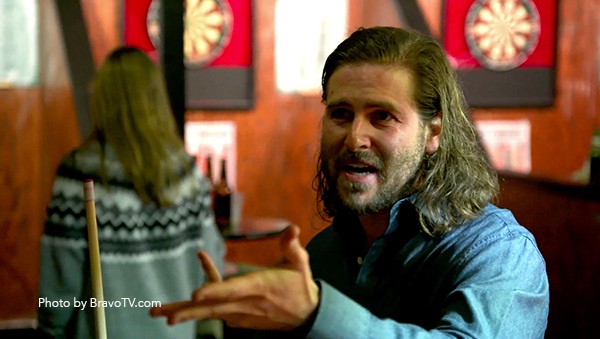 I would like to begin this week’s Southern Charm Savannah recap with a PSA: Hagood Coxe is a tomboy who hunts. I wasn’t sure if any of you were aware so I felt it my duty to inform you all. Hagood. Is. A Tomboy.

Now that we’ve gotten that important message out of the way, let’s get down to business. After Hannah Pearson‘s depressing Christmas party, everybody felt the need to get away, including Hannah herself. Hannah and Louis Oswald spent their holidays in Denver, Colorado. Upon their return, she meets Daniel Eichholz for breakfast at the Collins Quarter. She tells him about her trip, and he follows up with a discussion of the paintball trip he’s planned. He wants to do fun things because he’s been busy trying to start a bunch of companies. I’m not sure what the other companies are, or if he’s done anything else with the only one we’ve heard of, but that’s what he’s been busy doing. That conversation somehow segues into Catherine Cooper is a liar. I mean it’s true but still.

Anyhoo, while they enjoy their breakfast Hagood is perfecting her sake because she’s a tomboy. She loves it so she calls her investor, her mom Meredith, to let her know how amazing it is and hit her up for more money so she can brew more. Both her mom and I laughed. It’s not all sake talk, though. Hagood tells her mother she’ll be painting a portrait of Catherine because she is a versatile tomboy.

Meanwhile, Catherine meets up at Brandon Branch‘s house to give him his Christmas present and have a chat. About what? What else? They talk about her and Lyle Mackenzie‘s relationship or lack thereof. Brandon thinks Lyle wants to be with Catherine so he can live the high life. Except I thought they all already lived the high life. He thinks they have an unhealthy relationship (duh) and Catherine doesn’t deserve it. If Catherine doesn’t aim for a job in PR where all she does is spin stories all day then she’s wasting her future.

Catherine isn’t the only one trying to figure out her relationship status – Hannah and three of her very best friends, who are all either married or engaged, meet up for brunch to talk about her relationship. Hannah tells them that Louis told her he was going to get his business off the ground and then buy her a ring, but that must have been the alcohol talking because the next day he was like “uh yeah, that could be like a year from now or two years from now.” So now he’s in trouble again, and by that, I mean that Hannah is going to give him an ultimatum which is how all healthy marriages start out.

Later that night, Louis meets Lyle and Daniel for a drink and some pool. Sounds like a nice guys night out, which it is until they start talking about the trip that Lyle and Catherine took to Sapphire – a conversation that begins when they’re tipsy and ends when they’re full-on red-eyed drunk. In between their slurry discussion, Daniel meets a woman named Austyn. No, that’s not a typo. It’s Austyn, kind of like Texas but with a ‘Y’, she tells Daniel and all of America. That’s not important to the storyline but it made me laugh so I wanted to share. You’re welcome. Anyway, as they get drunker Lyle calls out Daniel for not hanging out with them, telling him his reasons are bulls**t. Daniel replies with “well can you see through the bulls**t with Catherine?” You would think Lyle would be used to these kinds of fights seeing as how Catherine is the master of spin. He’s not. Daniel hits him with another blow when he tells Lyle about Catherine sleeping with other people while they were together, to which Lyle replies “I know and I don’t care.” BTW, Lyle is still sleeping with Catherine so let’s just all hope they’re being safe and that the only down south reference they ever have to make is about where they’re from. The fight ends with Lyle slur-splaining that it actually does hurt – and I think we can all agree we hope he’s talking about his feelings.

The next day a sober Louis tells Hannah about the fight, all while Hannah is starting to see how messed up her relationship is. It is now the perfect time to go paintballing.

The gang, including Hagood the hunting tomboy, meet up and take a party bus to the paintball course. Brandon joins them but isn’t really into shooting paintballs because, as he explains it, he’s a queen. You’re not just a queen, Brandon, you’re my queen. Anyway, he pretty much just runs and hides during the game. The shooting commences and ends with Hagood capturing the flag because she’s a tomboy and she would’ve been disappointed in herself if she hadn’t captured it because she’s not just a tomboy, she’s a tomboy who hunts. Gosh, how many times do me and Hagood have to tell you.

After the paintball game, they all head to a bar for some drinks and dinner. Catherine thanks Daniel for an awesome time. Lyle seconds that and proclaims he is now a new man. From there they start with the new year resolutions: Catherine is going to move forward and work on being happy and keeping her sexcapades private. Daniel says this is the year he’s going to think bigger. I’m not sure how you think any bigger than “a bunch of companies” but if anyone can figure that out I’m sure it’s him. Hannah asks him when he’s getting married, to which he responds “when are YOU getting married?” Lyle chimes in with an offer to use the ring he got for Catherine, making the conversation even more awkward. Don’t you worry, Lyle can top Lyle. He then goes on to share his resolution with the group: he’s going to find a nice girl who is amazing and not selfish and marry her. Louis gets after Lyle for being a dick, but Hannah has a bit more sense when it comes to their relationship – she reminds Catherine that it’s not entirely Lyle’s fault for being in the position he’s in. This upsets silver spoon Catherine, prompting her to tell Hannah she’s on Lyle’s side. And now, thanks to Hannah trying to make people take responsibility for their actions, things are weird between her and Catherine.

That’s not the only relationship that’s going through a weird phase. The next day, Daniel meets his dad for some tennis. After their match, Daniel tries to get deep with his dad, telling him he’s broken and isn’t passionate about what he’s doing. He feels as though he’s living the life his dad wants him to, which his dad thinks is actually pretty great and reminds him that he volunteered to help with the business. AND THEN, record scratch: it turns out that Daniel only “volunteered” because his dad went to jail for a year. So here’s to you, Daniel. I’ve got your back and I hope one of your bunch of companies works out.

Who’s with me in having Daniel’s back? Do you think he’ll get away from the firm? Will Lyle and Catherine finally call it a day? How many more times do you think Hagood will remind us she’s a tomboy? Comment below!

Be the first to leave Comments for Southern Charm Savannah Recap: Paintballs of Fire