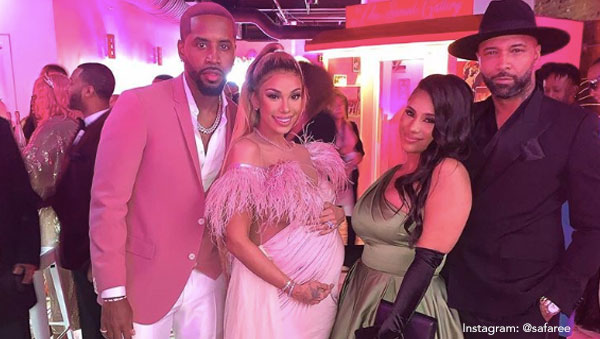 In my next life I want to return as the baby of Erica Mena and Safaree Samuels.  Not only does this couple know how to party; they go all out for this Princess-to-Be.

Over the weekend the couple threw themselves a Met Gala themed baby shower and not only did they go all out so did their guests.

Baby Met Gala & Our One Year Anniversary 💕🙏🏽 I have to start my day by thanking my Mimi @nevaehleheventsandweddings for putting together our first celebration for our Daughter who’s on the way. You pulled this off with so much details and elegance. I’m still in awe with how everything came out. Pink on PINK. This video is a glimpse but it does it no justice. Mimi you out did yourself! @safaree and I so appreciate you and your team. Thank you @loftlifevenue for letting us celebrate in your beautiful venue. #BabyGirlSamules #Babyshower #PinkonPINK #BabyMetGala song: No Regular Girl @safaree

Leading up to the big day the couple posted several times on their instastories that the guest list was invitation only and if you weren’t invited then they do not consider you family.  They also were adamant that if you did not abide by the dress code you would be turned away.

They were serious here.

What a night! A Baby Met Gala 😍💕 My husbands performance to our baby girl was everything to me. Our guest who made the night so special and danced the night away. Everyone dressed up and showed out. Everything was perfect! Thank you to everyone who came and brought Baby girl Samuels gifts. We appreciate it all. 💕🙌🏽 Video: @chiefthecreator Baby Met Gala Planner : @nevaehleheventsandweddings Venue: @loftlifevenue

#Safaree and #EricaMena are celebrating their baby girl tonight with a Met Gala themed baby shower with their close family and friends!! (📸: @chinee_chow)

The night would not have been the most extra of events without a performance by the Dad-to-Be.  Safaree showcased his signature pop lock move with a dance for his daughter.  The duo went hard with the pink inspiration.

Fun fact: Erica did not have a dress until a few hours before the shower.  Auntie Remy got in touch with a designer following a hysterical late-night call from the Mommy-to-Be and within hours a dress fit for a Baby Met Gala sower was created.

Remy for the win!

#PressPlay: It looks like #Safaree had a whole #SmoothCriminal dance routine going on at his baby shower as well 😩 (view previous post)

Had such a blast at @iamerica_mena & @safaree Babyshower with my bew @yandysmith Truly one of the most beautiful and over the top baby showers I’ve ever been to! 💕 #babymetgala #babygirlsamuels

What makes this so surprising is not only have the “formerly” engaged couple been feuding, but Cyn and Erica were once a couple.  And that relationship did not end on good terms.

Remember when Safaree hid Erica in his hotel room on the cast trip this last season and Joe tried to “fight” him in the name of his woman?  Fun times.

Sometimes you gotta come together to defeat Thanos.

Looks like everyone is on good terms and had the time of their lives.  The upcoming season is going to be interesting.

If you are genuinely happy in life no one can keep you angry. Life is too good to harbor negative feelings. These are my brothers 😂 ! Life is good in real life ova here 🤷🏾‍♂️

Is it December 16th yet?

What do you think of this baby shower? Are the LHHNY relationship reunions for ratings only?