Home > Buzz RuPaul's Drag Race Round Up: The Fun, The Fierce, And The Fail

RuPaul's Drag Race Round Up: The Fun, The Fierce, And The Fail

From RPDR UK all the way back to America for Trump's twitter fail, Taste Of Reality has the week's highlights. 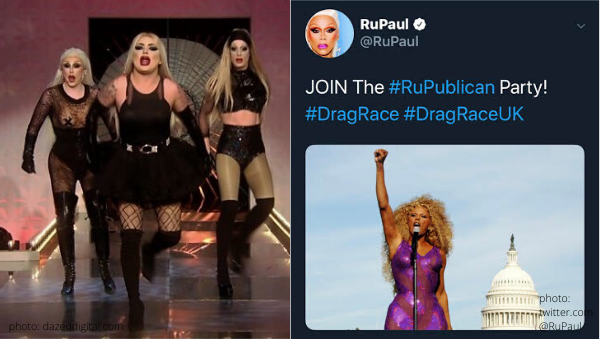 The Girl Groups the UK dragtestants paid homage to on this week’s episode were Fifth Harmony and The Cock Destroyers. The team that reigned supreme was The Frock Destroyers, consisting of Blu Hydrangea, Baga Chipz, and Divina De Campo. Ru took to twitter to show off the stiff competition from the runners up in Filth Harmony.

Queens, which girl group would you join? #FrockDestroyers or #FilthHarmony?

Shout out to RuPaul’s British girls for the phenomenal job they are doing bringing it to the franchise. I’m not the only one gagging for the Brits… DazedDigital.com wrote, “Last night was the best episode of Drag Race – American or British – in years.” Can I get an Amen?

Decider.com published an article titled, “‘RuPaul’s Drag Race UK’ Is Fiercely Revolutionary in Its Kindness,” and I squeed with joy. As much as I love a trip to the library to catch up on my reading, I love that the UK gals not only like each other, but respect each other. Yes, there is still delicious shade to consume, but, as Real Housewives of New York star Dorinda Medley would say, they ‘made it nice.’

Decider.com speculated the UK disposition is what keeps them polite, as well as the fact that the gals immediately bonded over starting a new franchise.

Well, I have my own shady theory. Since the UK version is on public television, dragtestants won’t win a large sum of money as they do in the States; hence, the different approach to the competition. But that’s just me…

Spelling is hard for Donald Trump. He meant ‘republican,‘ not ‘rupublican‘… or did he?!?!

…..the call with the Ukrainian President was a totally appropriate one. As he said, “No Pressure.” This Impeachment nonsense is just a continuation of the Witch Hunt Hoax, which has been going on since before I even got elected. Rupublicans, go with Substance and close it out!

Sure, the President of the United States misspelled the name of his own party, but RuPaul stepped in and cleaned up his mess. Ladies and Gentlemen, start your engines. And may the best political party win! 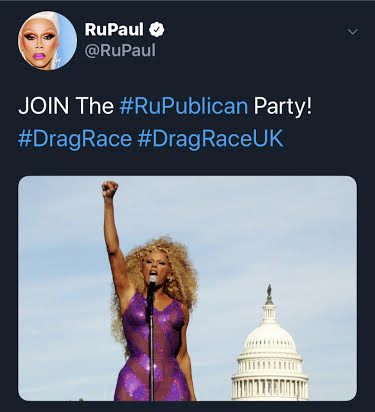 If you can’t get enough of RuPaul and his girls, check out the Alright Mary podcast. Colin and Johnny hilariously break down all things Drag Race, Dragula, and beyond. Click here for the most recent episode.

What was your favorite news from the RPDR universe this week? Sashay your opinions to the comment section.

Be the first to leave Comments for RuPaul’s Drag Race Round Up: The Fun, The Fierce, And The Fail