See what surprises Trixie and Katya, Miz Cracker and Alyssa Edwards have in store for us. 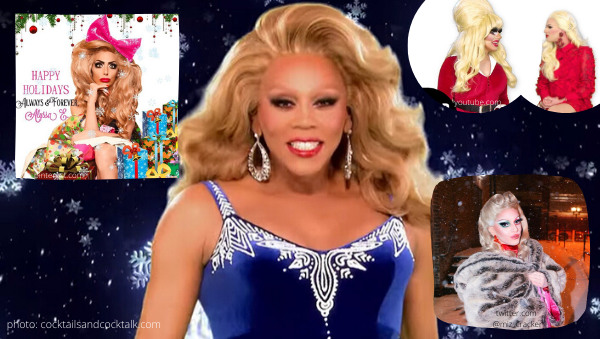 RuPaul‘s December lineup is bound to be an Eleganza Extravaganza! See what surprises Trixie and Katya, Miz Cracker and Alyssa Edwards have in store for us….
Available now on WOW Presents Plus‘ December holiday lineup, Trixie and Katya are back and funnier than ever as they invite you to A VERY, MARY UNHhhhLIDAY! The gals gab about sitting on Santa’s Lap, razor off the hair of an Otter, and all while dipping their toes in some ho Ho HO Holiday cheer!
Unhhhh Katya GIF from Unhhhh GIFs
Coming your way this holiday season, you can look forward to Jewtorials: The Hanukkah Special with Miz Cracker premiering 12/22! The NYC Queen is back in crack-tion for a very special Hanukkah edition of Jewtorials, where you will learn everything you need to know to slay your way through those 8 crazy nights!

If you’re not feeling the holiday cheer, there is something for you as well… Season 7 RPDR alum and self-proclaimed alcoholic Mrs. Kasha Davis joins gay hockey player turned motivational speaker Brock McGillis in This is Shit! These two shed some light on the shit we face in life, from internal homophobia to drinking ourselves to death – because everybody’s got some shit! Click here to watch the first four episodes.

No Christmas spirit? Would you rather material things over feeling the warm fuzzies? WOW Presents Plus has your back! BESTIE$ 4 CASH features two drag queen BFFs as they prove just how well they know each other as they compete for cash!

Here’s the episode of two of my favorites of RuPaul’s girls, Kim Chi and Naomi Smalls, as they do their best to win a few extra bucks…

You can catch up on the other episodes of BESTIE$ 4 CASH on WOW Presents Plus.

If you love RPDR and want to keep up with all of the latest happenings in the world of drag, you should listen to the Alright Mary podcast. Click here for the latest episode.

Which of these programs has you most excited? Sound off in the comments!