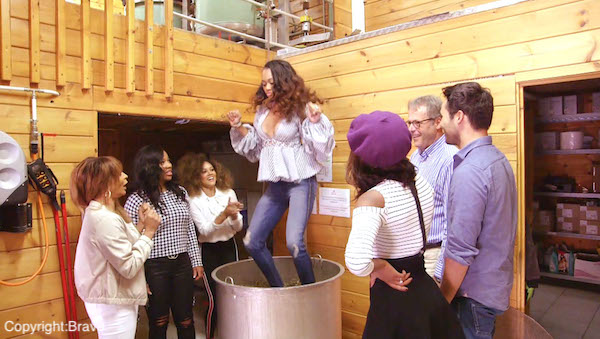 This episode of RHOP starts in the midst of the fight that aired last week. After Gizelle Bryant accuses Ray of trying to get with her business partner, Monique Samuels intervenes to stop the arguing. The ladies offer to wait for Robyn Dixon, but Gizelle insists they leave and stays behind to wait herself. Robyn’s excuse for being late is that she was tired…girl, suck it up. Everyone is dealing with jet lag, but you’re the only one who was late.

Monique is understandably upset that Robyn and Gizelle don’t come along on the first excursion she planned. Instead, the two women sight see and get crepes by themselves. Considering they’re the two who were iffy about the trip and only agreed to go because the other one was going, this all seems a little too planned out, not to mention incredibly rude. Gizelle even lies to Robyn and tells her that the ladies didn’t want to wait for her.

While Robyn and Gizelle embarrass themselves with their very limited knowledge of the French language, the rest of the ladies tour an essential oil distillery where they dawn hair nets that cover none of their hair completely. Monique basically believes essential oils fix everything. Marriage problems? Essential oil. Broke? Essential oil. The ice cream machine at McDonald’s is supposedly broken? Essential oil. She literally says that essential oils will help with mental ailments. Just when I start to side with Monique, she has to go and say something dumb like that. If essential oils actually helped with mental illness, there’s no way I’d still be paying outrageous copays for therapy visits and libido killing antidepressants.

After the oil distillery, the women head to Grasse, which is surprisingly not the weed capital of France but rather the perfume capital. The ladies eventually meet up with Robyn and Gizelle, and they all proceed to grill the owner of a perfumery about her business, much to her delight. Who doesn’t want free advertising to an American audience?

Later, the women all get together for dinner. The evening is immediately off to a weird start when Candiace Dillard says that her susband looks like a rodent when he doesn’t have facial hair. Candiace shares way too much sometimes, and I love it. Meanwhile, Karen Huger barely shares anything at all and gives no reason as to why she’s suddenly not wearing her wedding ring. She gets irrationally upset when questioned about it and tells everyone to keep Ray’s name out of their mouths.  Ashley Darby then claims that Ray said he is moving to Florida and Karen can “come if she wants.”  Karen unsurprisingly offers little explanation but continues to defend her marriage to the broke Bill Gates. Karen also gets into it with Gizelle during the dinner over their businesses again, but eventually the two seem to patch things up (at least for now).

Ashley continues to stir the pot (or drop truth bombs, they’re basically the same at this point) and questions Charisse Jackson Jordan suddenly getting along with Monique again. Ashley says that Charisse talks poorly about Monique, but Monique continuously supports Charisse. Ashley may not have the best approach, but she always calls it like it is and doesn’t put up with people being fake.

Even more drama arises when Robyn and Gizelle claim that Monique brought Sherman’s ex around just to get at Gizelle. What would Monique possibly have to gain from that? Monique says that Charisse is the one who wanted to bring Sherman’s ex around in the first place. Charisse is just trying to stay relevant; it’s time she gives it up and slinks back to her shame, I mean champagne, room where she belongs.

Evidently, the restaurant staff grew sick of their arguing. A waiter comes over and basically kick them out, and they flat out refuse. I firmly believe that Real Housewives trips overseas are at least 60% of the reason Americans are perceived as loud, rude, and overall annoying.

The next day, Candiace confides in Karen that she feels like every time she opens up, she isn’t taken seriously. I love the newest housewife, but expecting sympathy when your susband rightfully calls you a princess isn’t realistic. And seeking advice from Karen? That’s Candiace’s second mistake; Karen makes the poor girl cry.

The episode ends when Monique sits down with Gizelle for breakfast. Gizelle is upset that Monique “spearheaded” things with Sherman’s ex. “Spearheaded”, really? You’re having a casual conversation, not lying on your resume. Chill with the power verbs, Gizelle. Honestly, I don’t really care who is or isn’t friends with Sherman’s ex, and Gizelle shouldn’t either if she’s actually over him. She says that Monique took a shot at her and missed. Gizelle assures Monique that she never misses and says, “I’m like a ninja waiting…for just the right moment to blow your face off.” There’s no shortage of threats made by housewives, but this is next level iconic.

Do you think Gizelle and Monique will ever be able to mend fences? Comment below!

Be the first to leave Comments for RHOP Recap: Turm-Oil in France