RHOP Recap: Mime Your Own Business 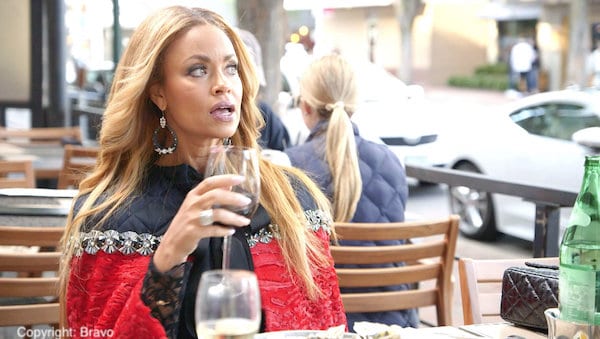 This week’s episode started with fish and ended fishy.

Karen Huger and Candiace Dillard are joined by Kyndall, Sherman’s ex wife, for a fish pedicure. Not to go all PETA here, but these are bad for both the fish and your feet. As Kim Zolciak says, “Do your research honey, click them keys.”

Anyways, in this scene Karen justifies her friendship with Kyndall since she feels like Gizelle Bryant is no longer her good friend.  Karen eloquently claims that Gizelle tried to “screw her in the butt without vaseline.” Annnnd now I can’t stop picturing Karen having butt sex. Lovely. Honestly though, this is probably my favorite quote from Karen ever.

Later, Monique Samuels and her husband go out for cheese and wine and discuss the logo for her new mom blog. He insinuates once again that he should be her priority, but then quickly redeems himself in my eyes by offering Monique a trip for her birthday.  He says she needs and deserves break. Um, FROM WHAT?! She has nannies, she has an assistant helping with her new business. I really don’t understand this girl. But anyone who imitates sex moves while eating cheese in public is someone I can be friends with, so I guess I’ll keep an open mind.

Monique decides she wants her birthday trip to be in France, and she invites all of the ladies. She hires a mime to deliver the invites to the women which is extra but in a sort of creepy way.

Robyn Dixon is the first to receive the invite. The mime shows up at her door and plays a tape recording in French and somehow she is expected to understand the language… Mr. Mime finally hands her an invite written in English, and Robyn is clearly surprised that Monique would even want her there.   There’s a flashback to the scene where Monique threatens Robyn with an umbrella, and it looks like an intense crime scene. I love the Bravo editors oh so much.

Robyn and Monique aren’t the only ones whose friendship isn’t what it used to be. Karen meets with Gizelle to discuss their issues, and Gizelle says how much she misses Karen’s multiple drunk phone calls. All I want in life is to be on the receiving end of one of Karen’s drunk calls.  Karen doesn’t appear ready to forgive Gizelle for her “wack attack” at Karen’s event. Karen says that Gizelle should talk first, and then she interrupts her immediately. Gizelle is hurt that Karen is friends with her ex’s ex, and Karen retaliates by saying that Gizelle shouldn’t be dating someone’s ex husband anyways. Uh, what?

It’s not like Gizelle dated Sherman while he was still married! Half of what comes out of Karen’s mouth makes no sense, but she’s so confident in what she’s saying that sometimes I’m tricked into believing her. In the middle of their argument, the mime attempts to deliver their invites, but the women just ignore him and continue arguing like he’s some creep on the street telling them to smile. Talk about comic relief. I couldn’t help but laugh at this poor mime’s attempts. If he quit his job after this, I wouldn’t blame him.

Meanwhile, Chris and Candiace sit down to work on their prenup and accomplish about as much as me trying to convince an NRA member that we need gun reform (aka nothing). Apparently, the couple needs a different person representing each of them because they have conflicting interests. This relationship should be fun to watch unfold.

It wouldn’t be an episode of RHOP without an unwanted appearance from Charisse Jackson Jordan. Monique sits down with Charisse to talk about the tension in their friendship. Basically, Charisse, a grown a** woman, feels that Monique is stealing all of her friends. Even if Monique is just using Charisse for her connections (which I sincerely doubt), who cares?! It’s all in the name of charity. In the middle of their conversation, Gizelle texts Monique and declines her invite to France and says that Robyn declines as well.  Robyn honey, I’m really trying to like you here, so please speak for yourself.

The women all eventually meet up at Ashley Darby’s open mic night at Oz. Both Michael and Ashley’s mom show up to watch her sing, and the scene is more awkward than when my roommate walked in on me singing Tyga’s “B**ch I’m the S**t” on the toilet.  The tension is palpable when her mom sits down next to Michael. Ashley performs a song for her husband with her brother and basically uses it as an excuse to flash her wedding ring.

After the performance, the ladies hash out some drama. Karen sticks to her Siri story that she meant to text “yay” instead of “yes” and never committed to Robyn’s event. Okay Karen, this sounds highly unbelievable and more fishy than Monique’s fish tank, but I give you props for sticking with your story.

After much debate, Robyn and Gizelle finally decide to go on Monique’s birthday trip, reasoning that they can just hang out with each other. All I want to know is who is paying for this trip. Because if Monique’s husband and/or Bravo are funding it, why would you ever decline a free trip to the South of France?! S**t, I’d go to South Dakota if someone else paid for it.

What are your predictions for the trip to France? Will Robyn and Gizelle ever make up with Monique? Tell us your thoughts below!

Be the first to leave Comments for RHOP Recap: Mime Your Own Business