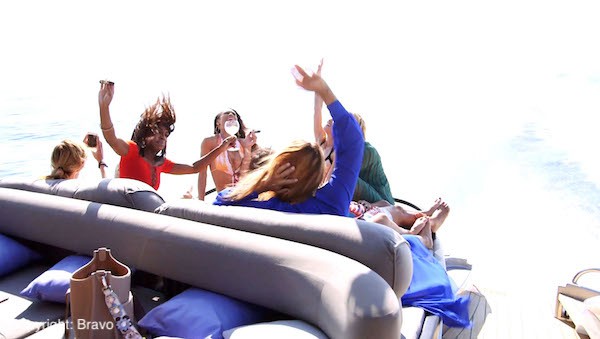 Once again, we begin where we left off: the b**chy breakfast between Gizelle Bryant and Monique Samuels. Despite the fact Gizelle won’t shut up about Sherman’s ex-wife, she says she doesn’t care about him because she is “the baddest thing walking, inside and out.” A+ for confidence girl, but the fact that you’re so mad at your other friends for hanging out with his ex doesn’t exactly scream “I’m over him!.  Gizelle and Monique don’t hug and make up, but at least Monique makes up with hubby Chris over the phone.

The ladies head to a winery later in the day, and the tension between Karen Huger and Ashley Darby is stronger than any of the wine. Karen speaks up to the sommelier and wants to pour his wine…It’s usually the other way around, Karen. She looks right at Ashley and says, “I have a 21 year old marriage because I serve my man.”

How does pouring a stranger’s wine prove you have a good marriage?! Also, is this the 1950s? The success of a marriage shouldn’t have anything to do with a wife serving her husband. The other women continue to comment on the lack of a wedding ring on Karen’s finger which makes Karen’s bragging about her marriage even more ridiculous. Even better? Gizelle asks the sommelier how to say “drunk” in French, and he responds, “that is not classy.” Couldn’t he tell from the moment these women walked in that literally nothing about them is classy, no matter how hard some of them try with the berets?

While at the winery, Charrise Jackson Jordan accuses Monique of throwing her under the bus with the whole Kyndall thing. Charrise claims she had nothing to do with Kyndall being around, and Monique admits they were both guilty. Unsurprisingly, Charisse denies involvement and says Monique needs to own her s**t. WHY IS CHARISSE STILL HERE?! I’m over her appearance in every damn episode; she’s a way worse version of Kim Zolciak.

Candiace Dillard tries to question Ashley and Robyn Dixon about why they don’t seem to want to get to know her. Ashley interrupts Candiace to take a picture because it is great lighting. Honestly, I don’t blame her. Good lighting is more rare than walking three blocks in Manhattan and not seeing a Starbucks; you have to take advantage of that. Karen assumes the grand dame role and tells the women they are being rude to Candiace. Candiace cries and yells that it is unfair that the ladies don’t try to see all the sides of her (aka they don’t appreciate how incredible she is and constantly boost her ego). Candiace is turning into a Monique; she keeps talking about how much she has going on, from getting married to dealing with her mom. Monique definitely annoys me, but I felt a strong connection to her when she says, “I need to start buying wine from the barrel.” I’d need about ten barrels to deal with these women.

Gizelle fires back that Candiace doesn’t share much with them. Um, she told you about her susband’s d*** the first time she met you…she shares plenty. Candiace says she doesn’t want the girls to call her a princess, and the other women point out that Candiace is the only one who said the “princess” thing. Karen intervenes again and tells Candiace that she doesn’t have to prove herself to the women.

In the car ride back, Ashley and Karen immediately get into it again about Karen’s marriage. Karen retaliates that Ashley uses Michael’s money. Duh! Karen probably used Ray’s money too until his ass went broke. Karen says that her marriage is an institution while Ashley’s is a fake world. She claims that Ashley looks miserable with Michael, so Ashley shouldn’t be questioning her about not wearing a ring. Ashley tells Karen to drop the facade and claims that Ray’s penis is old and dried up. Ashley is an unedited Instagram pic; she has absolutely zero filter, and I love it. Karen steps up her insult game and tells Ashley to take her fake marriage and ram it up her a**. These ladies are certainly getting down and dirty in France.

Candiace decides to join in and defend her new pal Karen.  Candiace fights with Ashley and says, “the only thing you know how to do is suck a d***!”. I can see Ashley’s tombstone now: Here lays Ashley Darby: Friend, Daughter, Giver of head more amazing than this headstone. Of course, some of the ladies couldn’t help asking “what color dick?”.

Monique says they all need to put some lavender oil on (*eye roll*), go to bed, and reconvene in the morning. Back at hotel, Candiace calls her susband and complains that Ashley and Gizelle are just bandwagon b****es. Honestly, one of the best things about being in a relationship is that you always have someone who has to listen to you complain and take your side for fear of losing your hot ass. Chris eventually convinces her to stick out the rest of the trip.

On the boat the next day, Gizelle questions seeing Karen with her ring on and now off again. Karen explains she locked it up in hotel because she didn’t want to take any chances. She was mugged before and had to quickly slip it into her “hoohah.” The others wonder how she had time to do that. As it turns out, Karen refers to the area between her breasts as “hoohahs…” Anatomically correct terms are definitely needed from now on.

The boat arrives in beautiful Eze, France, a town known for its herbs and oils. Monique shamelessly plugs her website yet again. The ladies go sightseeing and miraculously get along; it must be because all those essential oils healed them.

Later that night, the women attend a birthday burlesque party for Monique. Candiace apologizes for screaming and yelling at winery; she just wants the others to get to know her more. Robyn Dixon is hurt because she likes Candiace, but Candiace says she is different when she’s with Gizelle. This inevitably turns into a whole screaming match with Kyndall being brought up once again. Maybe it’s the French air, but eventually all the women offer apologies for most of the drama they were involved in this season. The episode ends with Charisse singing Monique “Happy Birthday” in French, an even more cringeworthy sight than the Countess’s rendition.

What did you think of this week’s episode of RHOP? Comment below!

Be the first to leave Comments for RHOP Recap: Au Revoir Drama