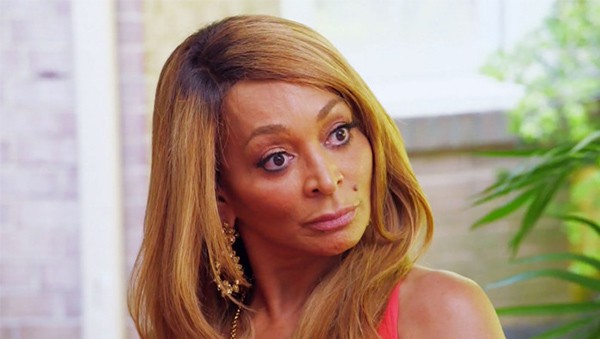 From garden parties to pity parties, season 3 episode 4 of RHOP was full of emotional drama and tears.

This week’s episode begins with new girl Candiace Dillard explaining her living situation. We learn that Candiace’s mom has “a diva den” aka an entire floor to herself in their co-owned home where Candiace’s man also lives. I don’t think many “happily ever afters” start with two lovebirds living with a bossy mom. Personally, I think Candiace’s mom could be giving Mama Joyce a run for her money. I can’t wait to see her turn into a momzilla for Candiace’s wedding.

The ongoing drama between Monique Samuels and Robyn Dixon over the Robyn meme is revisited this week. Monique complains about Robyn over a brunch with family and friends and a random call to her pastor. Monique’s sister seems about as interested in the Robyn drama as me listening to straight men talk about sports.

Meanwhile, Robyn catches Gizelle Bryant up on all the drama going on in the group since Gizelle was away on business. Gizelle takes it upon herself to fix said group drama even though she wasn’t exactly part of it.

During an emotional therapy session, we learn that Ashely Darby’s mom left her for a year and moved in with her boyfriend when Ashley was in kindergarten. Props to her for filming during a therapy session. Ashley continuously gives to the people in her life, much like an Italian grandma passing out food. Her therapist tells her that she needs to accept help from other people too.

Karen Huger and Gizelle sit down to talk over food, and Gizelle apologizes to Karen for the whole #taxreform and #freeuncleben thing. If I had a dime for every time I had to offer a half-hearted apology over a hilarious joke I made, I’d be as rich as Karen is still pretending to be. Karen looks decidedly dubious during the whole thing. Gizelle’s attempt to kiss Karen on the cheek at the end and Karen resisting is my eternal relationship with my boyfriend’s cat; she is not having it.

Another emotional moment during the show reveals that Monique recently suffered a miscarriage. Now I understand why the poor girl wanted to seem so “busy”; she wanted to keep her mind off of her recent loss.

Later, Charisse makes an appearance again at the garden party Gizelle throws for the ladies. Aside from her previous issues with Karen, Charisse contributes about as much to the episode as a trophy wife contributes to her joint bank account. Robyn greets Monique with a tried but true blasé  “wassup.” Ashley shows up with a giant tortellini on her head, and I honestly zoned out for a few minutes thinking about how much I craved pasta. Robyn’s issues with Ashley and Monique are discussed during the party. Robyn went from 0 to me when I broke my only corkscrew off in my bottle of wine real quick, screaming “What is your problem with me?” to Ashley. Robyn is understandably upset with Ashley for commenting about Robyn’s family, but Ashley owns up to her mistakes.

Gizelle also uses the garden party as an opportunity to read her new book summary. She discusses her upcoming fictional book “loosely” based on her life and divorce from a predominant pastor.  I’m sorry, but I really don’t think you should be able to call it your book if you use a ghost writer.

The episode concludes on a very dramatic note when Ashley sits down with her mom. They discuss her mom’s relationship with her boyfriend of fifteen years. We find out that her mom’s boyfriend was living in a tent when she met him, and evidently, he frequently swore at Ashley. Um, why would you ever start dating anyone who lived in a TENT?! Clearly, her mother doesn’t always make the best decisions.  Ashley is caught between a Corona and a cold place; she needs to cut her mother off financially in order to save her marriage.

Do you think Ashley will pick Michael or her mom? Let us know by commenting below!

Be the first to leave Comments for RHOP Recap: First Ladies and Second Chances