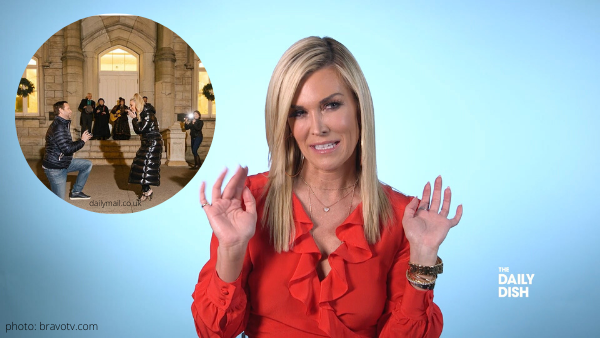 Real Housewives of New York star, Tinsley Mortimer, shared a photo of her engagement to on-again/off-again boyfriend, Scott Kluth. The coupon king popped the question to Dale’s daughter as Christmas carolers sang by the steps of the Chicago Water Tower. Days after the engagement, Tinsley shared her great news on Instagram captioning the romantic photo, “I always knew it was you!!! ❤️”

“Scott’s apartment is close to where the carolers were,” a source told Page Six. “They were walking to dinner and they saw these carolers, and they broke into Christina Perri’s ‘A Thousand Years,’ which is their song. It took Tinsley a few seconds to figure out what was going on, but then Scott got down on one knee. He’d organized the whole thing with the carolers in advance.”

The source continued, “She was totally surprised. Her friends sort of knew something was coming, but it really did take her by surprise. Scott asked her mom’s [Dale Mercer’s] permission, so their families knew, but it was a surprise to her friends.”

Rumors regarding Tinsley’s status on Bravo’s hit show began earlier this month when Tins skipped a scheduled RHONY filming because she was in Chicago with her on-again boyfriend. Click here if you need a refresher.

Do you think Tinsley will remain a Real Housewife of NYC or take on a new role as a real-life housewife to Scott? Sound off in the comments!

one Comment for RHONY Star Shares Photo Of Her Engagement