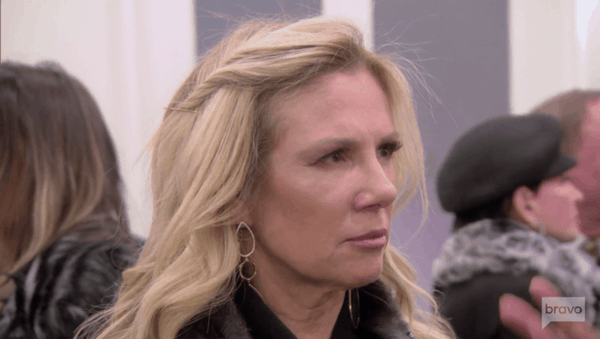 On this week’s episode of the Real Housewives of New York, the ladies are back in NYC, finally. Sonja Morgan and Ramona Singer‘s great friendship break-up continued. Elsewhere, Carole Radziwill and Luann de Lesseps made amends and Tinsley Mortimer got a big surprise. Let’s take a look at everything that happened on this week’s episode of RHONY.

The episode started with Ramona buying a latte machine for her daughter. While she shopped, she called Dorinda Medley about a Bendel’s party she’s hosting. She also told Dorinda that she invited Sonja, too. Yep, even after that awkward Hamptons brunch. Things won’t be awkward at all…

Bethenny Frankel then invited Sonja over to her (unfinished) apartment. She basically said that she feels bad that Sonja is being iced out by the other girls. At the apartment, the two talked about the Sonja/Tinsley drama. Sonja gave Bethenny a convoluted explanation about why she’s mad at Tinsley. She said Tinsley donated money to Bethenny‘s charity but never paid Sonja for letting her stay in her townhouse. Yet… I thought Sonja was happy to let Tinsley stay rent-free? Idk. Weirdly enough, Bethenny understood the explanation and made a big deal about how she understands Sonja now.

Carole and Tinsley went shopping together. They chatted about Tinsley‘s upcoming trip to visit her ex (?) boyfriend in Chicago. They also discuss Carole‘s relationship status with Adam. Carole said they’re not boyfriend/girlfriend. However, she also said that if Adam dating someone else, it’d be a betrayal. Weird. Tinsley then wonders whether it’s a friend with benefits situation. Neither of them knows what that means, which I don’t believe. They look up the term and Carole decides they’re definitely not that. 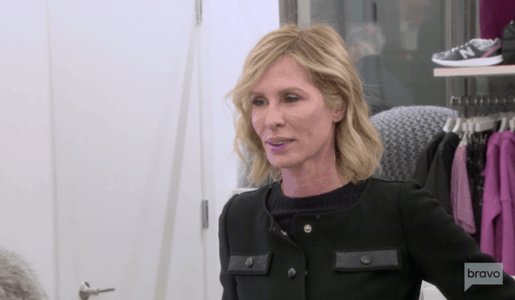 Dorinda and Luann look at apartments since Luann moved out of Tom’s NYC pad. The apartment they check out is stunning, naturally. They then chat about Dorinda‘s drama with Sonja. Luann says that she just feels bad for Sonja. Dorinda seems a bit fired up about Sonja‘s comments still, even though they kinda, sorta made up. In her in the moment interview, Dorinda said that she simply doesn’t want Sonja around, since she doesn’t bring positive energy.

Then, Carole and Luann met for tea. Except, Luann was way late for their meeting. Thankfully, it doesn’t turn into a Dorit/Teddi of RHOBH situation, because no one wants that. Carole wanted to meet since the two haven’t hung out one-on-one in some time. They talk about the uncomfortable energy between them. Carole brings up that Luann talks about her, and Adam, behind her back. Carole said Luann called Adam a “toy boy” (why it wasn’t “boy toy” I can’t understand). Luann laughs and says there’s nothing wrong with that (ya gotta love Luann).

Yet again, they both bring up that neither texted when both of their relationships ended. There’s just no conclusion to that drama. Because there’s just no end in sight to that, they both decide to squash things. We’ll see how long that lasts.

Tinsley then gave us the most annoying moment of the night. Her boyfriend, Scott, surprised her at her hotel/apartment. She proceeded to literally collapse to the floor and squeal at the top of her lungs. I actually had to turn my volume down at this point. He whisks her away to Chicago, meaning that Tinsley was totally skipping out on Ramona‘s Bendel’s event. 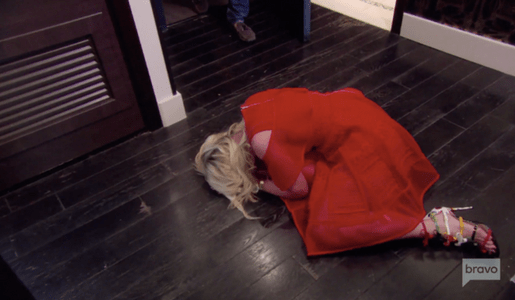 Bethenny‘s also skipping Ramona‘s event. She’s busy working with her charity, B Strong. She explained that she wants to bring another Housewife with her on her next trip to Puerto Rico for relief efforts. Instead of picking onetime bestie Carole, she decides to ask Dorinda. Yet another RHONY friendship bites the dust.

It’s finally time for Ramona‘s Bendel’s event. Carole arrives first, in a legit bathrobe. Then, there’s drama, of course, because Ramona invited Missy, Tom‘s ex-girlfriend. When Luann arrives though, she’s totally fine with it, even though the situation’s super awkward. The two ladies even say that there’ no beef between them and joke that it was all Tom. They’re right on that point.

Sonja gets to the event, and it’s even more awkward between her and Ramona. Luann left them alone to chat and neither of them spoke. Seriously. There was just this uncomfortable silence for a few moments and it was unbearable. Eventually, they started to chat, with Sonja once again bringing up that Ramona didn’t defend against Dorinda.

Sonja said that Ramona knows that she didn’t cheat on her husband. So, she was mad that Ramona didn’t speak up. But, Ramona said that she shouldn’t have to back her friend up in every single situation. Ramona called Sonja an “absentee friend” and then they both proceeded to yell at each other with their hand’s over their mouths. It was as hilarious as it was dramatic. 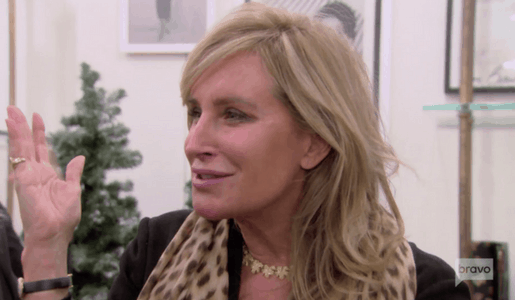 Ramona essentially ended the convo by saying that she’s worried for Sonja since she’s isolating herself from the group. Sonja shot back that Ramona was one of the ones isolating her. At this point. Ramona had enough and exited the convo and debriefed about the fight with Luann and Dorinda. Moments later, Ramona left. Yep, she left her own party before it was even over. Classic.

Who’s side are you on with this fight: Sonja or Ramona? Let us know in the comments below!

Be the first to leave Comments for RHONY Recap: Tea for Tat