And the camera's were rolling for Season 8! 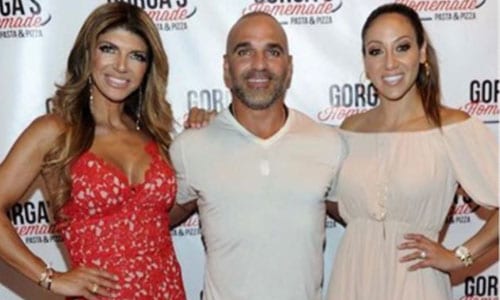 The famous Real Housewives of New Jersey stars Joe Gorga, Melissa Gorga and Teresa Giudice have come a long way from their rivalries to restaurant owners! Last night was the grand opening of their new Italian restaurant Gorga’s Pizza and Pasta in East Hanover, NJ. As a tribute to Joe and Teresa’s mom, it’s all about homemade everything from the pasta to the sauce. It’s mostly Joe leading the way on this new family business, but we all know Teresa loves to cook and has the books to prove it. Melissa making pasta is a slight surprise since she’s busy running her boutique Envy by Melissa Gorga, but she does look cute modeling a dress from her store and the aprons. The grand opening brought out fellow RHONJ stars Siggy Flicker and Dolores Catania as well as the famous Jersey Pizza Boys and Cake Boss Buddy Valastro! Of course the cameras were rolling for season 8 so we can’t wait to see if the family vibe’s really more namaste or nama’stay away.

We are so proud to have opened a Resturant with all of our amazing recipes! Stop by😀

We love the aprons❤️❤️❤️❤️ check out gorgaspasta.com you can grab the sauce online!!

It's official! The Resturant is open! Gorga's homemade Pasta & Pizza in East Hanover, NJ! Can't wait for you to try! 😍

@jerseypizzaboys follow their pizza adventures. These boys are amazing and I love their dad!

I want to wish my good friends all the best at their new restaraunt @joeygorga @melissagorga the food was awesome at Gorga's Homemade Pasta and Pizza @gorgaspasta in East Hanover, NJ!