They even got gussied up in cowgirl style! 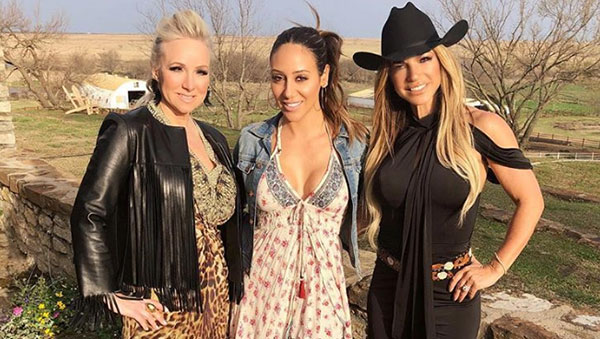 Over the years Real Housewives trips have become epic spectacles as the ladies most recent globetrotting adventures have brought them to amazing places like Iceland, Berlin, Barcelona and Milan. RHONY recently filmed in Columbia for season 10!  So what a surprise to see Teresa Giudice, Melissa Gorga, Dolores Catania and Margaret Josephs filming their season 9 cast trip in Oklahoma of all places! Maybe the RHONY shipwreck has made production consider landlocked locations from now on?!

After all, Oklahoma is OK! Excited to get their cowgirl style on, the RHONJ ladies stocked up at boutiques like Charlotte’s Web Towaco and Melissa Gorga’s Envy for cute western wear. From what we can tell, they’ve headed out to some beautiful and windy country to fish and drink beer?! This will be a new side of the Jersey girls! Who’s missing? Danielle Staub. But we did get a sneak peek of two new rumored cast additions Jennifer Aydin and Jacqueline Goldschneider.

As with any cast trip, we can’t wait to watch and see where they go! Take a look at the pics released so far…

You can take the girl out of Jersey but you can't take the Jersey out of the girl! @charlotteswebtowaco

Enjoying every moment of this beautiful scenery!🐟☀️

It's blowin’ up a storm here in #Oklahoma! 🌪 What are everyones’ plans for the weekend? ☀️ . . . . #tornado #southerncharm #southernbelle #realhousewives #RHONJ #realhousewivesofnewjersey

Country sunsets and Oklahoma winds with this cutie @melissagorga 🌞💨💕💕

A country music duet in the making @teresagiudice!! Oklahoma is OK with us!! @oklahomabarbie #countrygirls #rhonj

Everyone needs a little country❤️ #rhonj

Sometimes all a girl from Jersey needs is a beer🍺 #rhonj

What do you think of the Jersey girl western wear? Tell us in the comment below!

Be the first to leave Comments for RHONJ Filming Season 9 Cast Trip In… Oklahoma?!