Home > Buzz RHOD Recap: Are You Calling Me an Alcoholic?

RHOD Recap: Are You Calling Me an Alcoholic? 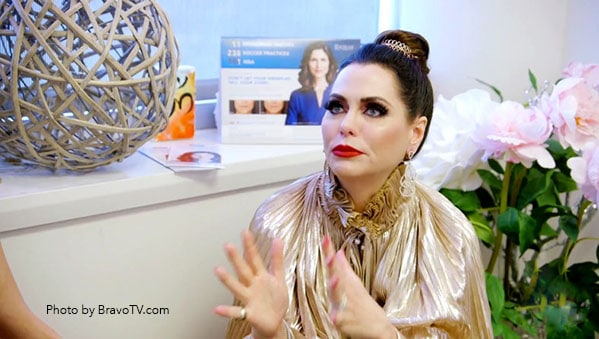 So listen. Like you, I love this show. I very much enjoy living vicariously through these women. I love our boozy lunches. I love our newly renovated million dollar homes. I love everything except for one thing: they fight about the same crap over and over again. In my hood, we would’ve pushed one into the other by now and made them get over it by serving each other a little jail yard justice. But you can’t do that in high society. When you’re rich, you have to argue in front of people to get other people to not like the person you’re fighting with. That sounds exhausting, which is probably why some of these women don’t have jobs. NOW I get it.

Let’s dive right into the fights, shall we?: LeeAnne Locken is not messing around with this wedding. Her and Rich have lunch and talk more wedding details, mainly discussing her dress. She tells Rich about wedding dress shopping and not being able to invite D’Andra Simmons. Clearly, this is Rich’s favorite topic proven by his response, “why?”, followed by a comment about her drink. While LeeAnne says she doesn’t want to lose her friendship with D’Andra, she also no longer trusts her because she believes her drinking is out of control.

Speaking of D’Andra, she’s speaking about LeeAnne to the world’s most amazing woman, Mama Dee. #mamadeeforpresident2020 I was unaware of this (probably because of my newness to the show) but LeeAnne has been in D’Andra and Dee’s life for quite some time. Apparently, a chili cook-off is coming up and D’Andra isn’t too excited about LeeAnne participating with her and Dee as she is having a hard time her friendship with LeeAnne. She begins to tell her mom about her feelings on the wedding and how she feels like LeeAnne is picking at her, and Mama Dee ain’t tryin’ to hear it. She shuts D’Andra down by telling her to leave LeeAnne alone, maybe LeeAnne doesn’t want her knowing her business, and maybe LeeAnne is getting married because now she feels like she has to and not because she wants to. Then she really lays down the law by telling her what she needs to be focused on is the business. In her testimonial, D’Andra agrees with her mom but we’ll see how long that lasts after she gets the business put in her name.

Let’s quit talking about D’Andra and LeeAnne for a minute and talk about my new favorite, Stephanie Hollman. Stephanie’s sister Tiffani is in town and she seems like my kind of girl. Once when they were younger, Stephanie wore a shirt belonging to her sister without asking and to get back at Stephanie, Tiffani peed in her shampoo. What I’m saying is, this is probably how the women SHOULD be fighting with each other. Anyway, Stephanie tells Tiffani about Travis (Stephanie’s husband) leaving for Harvard Business School for a month and her concerns about being with her kids by herself and paying bills. It seems that while her sister Tiffani was busy learning how to survive in the real world, Stephanie was busy getting taken care of – first by their father (who once drove 2 1/2 hours to her apartment to fix her toilet) and now by her husband, Travis, who makes all of the decisions for the family. However, Stephanie is working on finding her own voice and deciding for herself who she should be friends with so I’m sure she’ll get to bill paying eventually.

I enjoyed watching Stephanie and Tiffani’s sisterly exchange. It was a nice break from the D’Andra and LeeAnne drama. Unfortunately, it didn’t last. Joined by her son Bruin, Brandi Redmond meets her husband for lunch and proves that they’re totes going strong and are in love. Just don’t go by Bryan’s facial expressions – that’s just his face. Anyway, all of Brandi’s joy makes her believe that it’s actually LeeAnne who’s full of [email protected] when it comes to her personal life, particularly the wedding. I’m sorry but is LeeAnne royalty? Is this why no one can quit talking about her real and/or imaginary wedding?

Let’s move on to something more productive, like the grand opening of Cary Deuber’s laser center! Yes, Cary quit stirring the pot and causing strife between the girls and it’s probably because she no longer has time. Her husband is a little nervous about the grand opening and he should be because all of the women are invited – including LeeAnne. I did not know this but apparently, a season ago, LeeAnne said that Cary’s husband…. how do I say this…. was in some compromising positions with other men. Cary’s husband approaches the women and I swear, LeeAnne didn’t even look this nervous when she got called out for basically saying that D’Andra was broke (which, in Dallas high society terms means ONE of her bank accounts wasn’t spilling over). As LeeAnne tries to not poop herself, D’Andra walks in wearing what, apparently, is a pretty pricey outfit. I couldn’t tell but fortunately, Kameron Westcott was there to let me know, basically saying that her $200 wouldn’t have been enough to cover that outfit. I don’t think we’re ever going to quit hearing about how D’Andra isn’t poor.

LeeAnne and D’Andra exchange awkward hugs and hello’s and LeeAnne pulls her aside to talk. Mama Dee has invited LeeAnne to the cook-off so it’s time that D’Andra squash their problems and become friends again before the event. They find a room away from the party to talk and LeeAnne goes right into it: she is not happy about the comments D’Andra has been making regarding her relationship with Rich and she wants her to keep her opinions to herself and particularly away from Brandi. LeeAnne’s biggest concern is that Brandi will begin making fun of her and her situation. LeeAnne, I know you’re into meditation and all but instead of banging your feelings away on a bowl, I would like to suggest reading The Subtle Art of Not Giving a F$#@. Just trust me.

While she’s trying her best to keep her life private from Brandi, Kameron is questioning Brandi about the fight she had with LeeAnne at the 80s party. Brandi tells Kameron about LeeAnne’s “you adopted a baby to save your marriage” comment. Except that’s not exactly how LeeAnne said it – LeeAnne said it in a way to hurt Brandi but also seem like “well I didn’t really say that”. You know what I mean. Kameron is having a hard time believing that LeeAnne could say anything like that because she’s nice now and meditates her anger away. That may be, but she still has some strong feelings about Brandi. In fact, she goes from “I don’t want Brandi knowing my life” to telling D’Andra that she’s developing a drinking problem because of Brandi. This pisses D’Andra off for reasons that go beyond name-calling. D’Andra’s father passed away from a self-inflicted gunshot wound that occurred while he was drunk. So, for D’Andra, this was hitting below the belt. While LeeAnne may be concerned for D’Andra, the fact that she believes Brandi drinks to escape leads me to believe that LeeAnne just wants the women to quit being friends with Brandi.

Just as D’Andra exits the conversation, Kameron and Cary conveniently walk in. D’Andra and Cary walk out together while Kameron and LeeAnne discuss the new fight. First, Kameron tells LeeAnne about what Brandi said (making Kameron the new Cary), to which LeeAnne responds by clarifying her comment and is, once again, worried about what the other women are going to think so she feels like she needs to clarify for them as well.

Meanwhile, D’Andra is telling Brandi and Stephanie that LeeAnne called her an alcoholic and explains to them the significance of this kind of comment. Then Cary walks in and is bought up to speed, although she believes it’s all a misunderstanding. They all end up back at the party and LeeAnne decides it’s a perfect time to confront Brandi about what she told Kameron regarding the baby-to-save-the-marriage comment. Brandi is like “yeah, whatever” and then she and Stephanie leave together. It only goes downhill from there. Brandi tells Stephanie that she thinks LeeAnne is pretending to be friends with her to get at Brandi, which hurts Stephanie’s feelings. It should’ve annoyed her because none of these women are in high school yet they enjoy acting like it.

Do you think LeeAnne is pretending to be friends with Stephanie? Do you think Brandi is digging herself a hole with the women? Comment below!

Be the first to leave Comments for RHOD Recap: Are You Calling Me an Alcoholic?