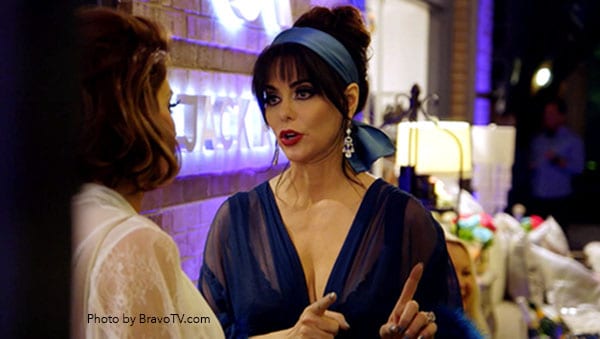 OK, is it me, or does anyone else think that Dallas “society” is just Fight Club where the first rule is you can only threaten to beat up people in “society” Fight Club? I mean, seriously. With the exception of Stephanie Hollman’s beautiful vow renewal ceremony, we basically just watched an entire episode of threats.

The episode starts out nice and all. Cary Deuber assembles and sends out baskets that serve as invitations to her trip to Copenhagen. All of the women receive them, and all of them accept the invitation. But you’ll have to wait till next week to find out about their out-of-town fights. This week, as you probably already guessed, is STILL about D’Andra Simmons and LeeAnne Locken.

Their relationship has officially reached the point where anything the other one does pisses the other one off. Take LeeAnne’s wedding dress fitting: LeeAnne appears to be having a lovely time, surrounded by Stephanie and other women who love and are happy for her. Yet, this and the fashion show she put on for her guests wasn’t enough to bring her back from the dark side. As she chats with her friends, she makes sure to thank Stephanie for showing up and reminds everyone that D’Andra didn’t. Stephanie tells LeeAnne that she hopes they can work it out as she has seen a change in LeeAnne and does not believe she is the same person she once was. LeeAnne claims it’s the meditation, so Stephanie asks LeeAnne if she’s ever considered suggesting to D’Andra that she try meditation. LeeAnne tells Stephanie that she believes D’Andra thinks her meditation is fake. So I guess there’s no hope for D’Andra.

Actually, D’Andra just ain’t got time for that. She’s busy at work making sure that Mama Dee is putting the final touches on the contract that guarantees D’Andra will be the official owner of their company. Once she receives a verbal confirmation that the contract is almost ready to sign, she switches gears and starts talking about the cooking lesson and what happened with Kameron Westcott and her mother-in-law (MIL), Jimmy. Dee then tells D’Andra about the conversation her and LeeAnne had, telling D’Andra that LeeAnne called her an alcoholic and said she drank the most when she was around Brandi Redmond. Yes, this conversation is still going on. D’Andra tells Dee that she no longer feels like she and LeeAnne are friends and that LeeAnne is most loyal to Kameron. Mama Dee is pretty much like “let them have their loyalty, and next time tell them off and don’t put up with them.” I’m paraphrasing but that was the gist of it.

While D’Andra is getting fight lessons from Mama Dee, LeeAnne is having the same kind of girl talk with Kameron. Upon arrival, LeeAnne is served pink water, which she uses to toast to positive people and happiness. They have a seat and LeeAnne kicks the conversation off by reading the text she received from D’Andra explaining why she couldn’t make it to her dress fitting. This behavior is deemed “psycho” by both Kameron and LeeAnne. Side note: I deem LeeAnne’s repeated loud praises of positive people to be “psycho”. Following this exchange that actually made them both look “psycho”, Kameron touches on the fact that D’Andra is a Simmons and needs to act a certain way to uphold a certain reputation. LeeAnne is so put off by D’Andra that she doesn’t want to go to Copenhagen. She still is because then how would they fight, especially after LeeAnne said that if D’Andra comes at her again she’s going to “karate chop her in the throat”.

Now that we know how LeeAnne really feels, it’s the perfect moment for her to have to attend an event hosted by D’Andra. D’Andra is hosting a pajama themed party for the release of her product Hard Night Good Morning as well as the relaunch of the product Green Miracle Shots. The women begin to arrive and it gets real, quick. Cary arrives and is greeted by Mama Dee and a PSA: take care of D’Andra in Copenhagen because if she comes home hurt I’m going to make everyone wish they were dead. That was just the start of the party. A few moments later, Cary walks outside and runs into a similar conversation with D’Andra. D’Andra is still – STILL – upset about the Jimmy and Kameron debacle and is now officially done with Kameron, telling Cary that if they don’t leave her alone she’s going to mow them down. I believe her exact words were “they’ve awakened the dragon”. This is all starting to turn into some weird Mortal Kombat: Real Housewives Edition video game.

While D’Andra is telling Cary what’s up, Mama Dee is inside about to do the same to LeeAnne. LeeAnne tells Dee that she loves D’Andra but she’s said some very hurtful things about her, to which Dee replies “you have too.” Cary casually interrupts before Mama Dee can really serve her some tea, so she’s like “whatev’s” and walks outside where she runs into Brandi and D’Andra. Also, Cary was there and I’m starting to think she’s some sort of wizard who can appear anywhere. I’m not even convinced she’s flying to Copenhagen; she’ll probably just morph there. Anyway, Dee tells Brandi about what went down at the cooking lesson, making sure to include the alcoholic comments made by LeeAnne. For Brandi, this is a big deal as her adoption isn’t finalized and something like this could be a reason for Child Services to take her new son away. It’s a good thing she’s not on TV or anything. After this exchange, D’Andra hugs Brandi and thanks her for her support. Brandi tells D’Andra how proud she is of her for trying to become her own person. And with that, we move on to the best part of the show: Stephanie’s vow renewal ceremony.

Stephanie’s husband, Travis, has planned the perfect ceremony for Stephanie. And, OK, if you didn’t tear up listening to her explain how grateful she was for the life she’s been blessed with then you’re a robot. Straight from another planet robot. I teared up and sometimes I forget I still have that function. Anyway, the ceremony was beautiful and all Travis wants in return is one thing: butt sex. His words, not mine.

The next day, the women arrive at the airport to head to Copenhagen. The trip is already off to a good start for D’Andra and LeeAnne: they’re both flying coach.

Maybe that’s what they’ll fight about in Copenhagen? Do you think they’ll finally call it a day with their feud? Comment below!

Be the first to leave Comments for RHOD Recap: Where’s Copenhagen?