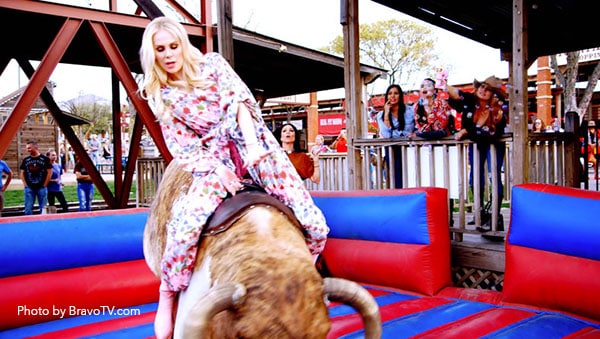 So, I’m 34. Hang on, I have a point. I’m 34 and I work with quite a few people who are under the age of 24. It’s rough. Shut up, it is. The problem is, they act the age I should be acting and I act 10 years younger than them. However, I’m in luck. Based on the Real Housewives of Dallas it seems that my attitude is trending in the right direction. Look who’s ahead of the curve now.

Let’s kick things off with the cast member closest to my immaturity level: Brandi Redmond. After we’re treated to a quick montage of Kameron Westcott taking family photos and Stephanie Hollman enjoying her Italy vacation, we’re taken to Brandi’s house where she’s trying to soothe a screaming baby while her kids work their hardest to make her day as difficult as possible. So far, she’s avoided hiring a nanny but if her daughter keeps running around hopped up on Fun Dip and wreaking havoc, that’ll probably change.

While Brandi tries to manage her family, Leeanne Locken has dinner with her boyfriend Rich and, after the conversation she had with the group regarding her engagement, decides to bring up the fact that they’ve been engaged for a year (last week I incorrectly stated it was nine years) and have yet to set a date. She believes they haven’t talked about it because they both don’t actually want to get married, he believes they simply have a communication problem brought on by the fact that he doesn’t want to piss her off. I’m still new to this show but I’m guessing before she began her “serenity now” treatment, Miss LeeAnne had quite the temper. He continues by telling her he wants to take care of her, which sounds great to us but to LeeAnne, it’s not enough to convince her they’ll be together forever like her grandparents. She needs more encouragement so he, once again, asks her if she’ll marry him, which she believes makes it legit official but D’Andra Simmons and I think he just reset the clock and gave himself another year.

The next day, LeeAnne pays D’Andra a visit to tell her all about her engagement squared. Hang on, there’s something we need to address before we go any further. LeeAnne made a comment about how the girls want to drink all night, sleep for four hours and then get up and start drinking again. Yeah, we’re from Texas. I don’t know if that’s anything to boast about but there you go, it’s out there. Anyway, the women have a chat that begins with D’Andra discussing her plans to separate her business from her mothers. The problem is if she leaves she’ll basically have to start all over. Actually, the real problem is she won’t be making that money like she is now. So there’s a lot to think about. After nothing gets solved, LeeAnne switches gears to relationship mode. LeeAnne tells her about the discussion she had with Rich and what I like most about D’Andra is she doesn’t have a poker face. She thinks it’s all BS (as do we) and tells LeeAnne that she thinks Rich was just telling her what she wanted to hear. Switching gears again they begin talking about D’Andra’s birthday. She’s turning the big 4-9 which calls for a Texas-sized celebration: the Rodeo. This is great and all except that LeeAnne isn’t too cool with Brandi being a part of the party: she thinks Brandi is using her new friendship with D’Andra to get to her. I don’t do meditation but can anyone tell me if one of the side effects is paranoia? D’Andra tells LeeAnne she’s a big girl and can take care of herself.

Fortunately, LeeAnne’s concerns don’t put a damper on the party plans and it’s now time to get down to business. D’Andra’s birthday kicks off with birthday shots served by the birthday girl herself. Kameron, Brandi, LeeAnne and D’Andra’s friend Joyce arrive and they head out. Kameron is driving. OK. Either she has a self-driving car or she needs to be banned from driving. She looked back to participate in the women’s conversation a good amount of the time and at one point was looking down and texting. I don’t even know what they were talking about because I was petrified she was going to crash at any minute – I genuinely felt like I was in the car.

Anyway, they somehow manage to safely make it to their first stop on the way to the Rodeo: a bar. The drinking is now in full swing and even includes a beer bong. Once a conservative drinker, LeeAnne decides to join the women and participate in beer bonging herself. Brandi jokes that she doesn’t know if it’s cute or sad that LeeAnne didn’t want to be left out and OK, maybe LeeAnne isn’t being paranoid. LeeAnne drinks the entire beer and her reaction took me back to my first hangover (it was on Zima, but we’ll save that story for another day). She was dry heaving so bad that at one point she made me nauseous. Fortunately, she doesn’t puke – or they didn’t show it – and they all head to the Rodeo. The first attraction they arrive at is a mechanical bull. Brandi, D’Andra, and LeeAnne all try the bull and fall off. Then the real show begins when Kameron (Rodeo Barbie) tries to ride the bull in her dress. The look on her face was priceless – like she was shopping at an outlet for the first time. The Rodeo Barbie gets off almost as soon as it starts and with that, they enter the arena to watch the bull riders.

After a quick afternoon of actually participating in the Rodeo, they head to another bar where things really get good. First, Kameron asks Brandi how she feels hanging out with the group without having her friends Stephanie and Cary Deuber with her. She’s cool with it and thinks the women actually act a lot different than when they are around. LeeAnne can explain this: it’s because Brandi isn’t high society. I was right all along. This IS just like Dynasty, or Dallas, or all of those 80s shows about Texans with money. Also, did anyone else think it was funny that of ALL people LeeAnne was talking about someone not being high society? Anyway, from there I got schooled on last names in Dallas. Apparently, if you’re a Westcott or a Simmons you’re held to a higher standard than the rest of us peasants. D’Andra asks Kameron if she feels pressure because of her last name and basically, she doesn’t because she was born to be stuffy (my words, not hers). This sparks a tiff between Brandi and LeeAnne. You see, D’Andra is tired of being boring and LeeAnne thinks she should stay boring, primarily because that would make her not friends with Brandi. Brandi tells LeeAnne that D’Andra should do what makes her happy, and LeeAnne thinks she should stay in a place that once uplifted her. I wonder if that includes the way her mom treats her?

Following this exchange, Brandi chooses this exact moment to get D’Andra the $2,000 necklace she wanted in Colorado. LeeAnne rolls her jealous eyes and then invites Kameron to play bar basketball and talk about Brandi. Kameron thinks Brandi is trying to buy D’Andra’s love, which sounds plausible except D’Andra took to Twitter to explain that Cary and Stephanie chipped in for the necklace. D’Andra gets emotional and tells Brandi how grateful she is to have her as a friend, and then tells her what LeeAnne said about their friendship. Here’s where the fun starts: LeeAnne doesn’t understand this new friendship – she thinks D’Andra is forgetting who she is and shouldn’t be friends with Brandi because Brandi can sometimes be classless. THAT turns into more shots and, wait for it, LEEANNE GIVING D’ANDRA A LAP DANCE AND THEN DRY HUMPING THE AIR AND THE DANCE FLOOR. She would call it dancing. From there, she drunkenly hugs D’Andra and begins drunk screaming how fabulous D’Andra is. Tell me that thing about “high society” again, LeeAnne.

That was enough awkwardness and weirdness for one segment so it’s time for Stephanie to come home. She heads over to Brandi’s house where Brandi reenacts LeeAnne’s dance and then tells her what LeeAnne told D’Andra about her. And with that, it looks like their feud is rekindled.

So, who else thinks LeeAnne is the real problem child of the group? Will D’Andra ditch high society to keep putting K-cups in her butt? Comment below!

Be the first to leave Comments for Real Housewives of Dallas Recap: Rodeo Barbie