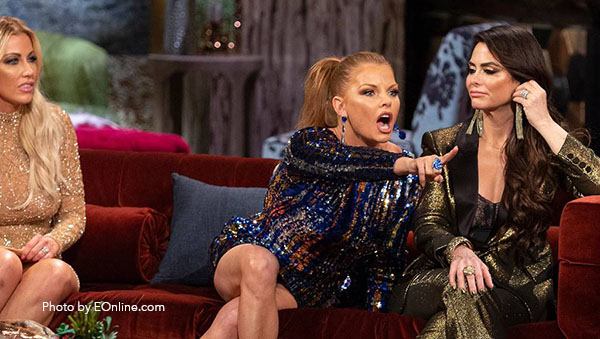 “It’s the most wonderful time, of the yyeeaarrr.” Yes, it’s reunion time. Time to get the truth behind all the editing. Before we jump right in, let’s begin with some light meditation led by LeeAnne Locken.

I hope you enjoyed that because that’s about all the peace we’ll get during this reunion.

First topic of discussion: Beaver Creek, CO. Before I go any further, did you know that Taylor Swift rented Kameron Westcott’s Beaver Creek getaway? Well, she did. Kameron’s houses are Air BnB’s to the stars. Anyway, the first question about the trip is regarding the “no, I’M the queen bee” fight that LeeAnne had with D’Andra Simmons. When I watched the episode I thought the fight was about who was the queen of the group. Turns out, they were fighting about who was the queen of the show. Yes, apparently they both think the show is on the air because they’re on it. They’re not wrong, but they forgot to include the rest of the women. Real HousewiveS. Plural.

This fight isn’t over either. LeeAnne is quoted in InStyle Magazine claiming to be the star of the show, and while she claims it was a joke, I think she needs to be written a reality check: Mama Dee is the queen of the show.  Anyhoo, D’Andra is so irritated by LeeAnne’s comments that she’s decided she’s going to reveal a secret about LeeAnne to the whole world. You’ll have to get closer for this one. Closer. Here it is: When D’Andra joined the show in season two, LeeAnne told her that Cary Deuber said she was going to fat-shame D’Andra the way she did her own husband, Mark.

This sets Cary off. Both Cary and LeeAnne claim that was never said, and Cary denies ever fat-shaming her husband. They show a clip of her talking about how gross he was when they met, but I wouldn’t call Cary a fat-shamer he’d already lost the weight by then. Gold digger, maybe. But not a fat-shamer. Cary is so pissed off at D’Andra that she just screams “f*%$ you for thinking that I would say that.” So that secret that we thought would be a real barn-burner was actually a rumor and very “who cares” and all it did was make Cary mad.

Next, Andy Cohen asks about pretty much the only friend D’Andra has left: Brandi Redmond. While D’Andra explains her and Brandi’s friendship, Kameron, LeeAnne, and Cary talk about the fat-shaming comments and how insane they were, so I only caught D’Andra talking about how fun-loving Brandi is. Andy asks LeeAnne why she told D’Andra not to be friends with Brandi, and LeeAnne explains that she was concerned and wanted to protect D’Andra because she doesn’t trust Brandi.

Now, I know we all thought this was over. Nobody is more sorry than I am for bringing this up. Andy asks about the fight that Kameron and Stephanie Hollman got into when Kameron misunderstood what Stephanie said during their “don’t bash Brandi for the baby” fight. While Kameron admits it was a misunderstanding, surprise!, she still doesn’t understand why Brandi didn’t tell her she was adopting. Hang on, it gets better. Kameron was also upset that Stephanie made up the story about finding a surrogate. She even goes as far as saying that there are people with fertility issues so she shouldn’t have made that joke. Before I punched a hole in my TV over Kameron’s comments, D’Andra chimed in and told Kameron that Brandi adopting a baby was none of her business.

How do you think that went? Kameron fired back asking, “how can you say that when you get in LeeAnne’s business?” D’Andra’s response? “That’s the pot calling the kettle black.” Cary tells her to just answer the questions and once again, D’Andra’s comments have backfired.

From there, we move on to Stephanie and her suicide admission. I’m happy to report that everyone’s favorite housewife is doing great! She went to a retreat to work on herself and, as a result of being on the show, has thicker skin which has made her depression a little more manageable. Keep doing you, Stephanie!

Stephanie isn’t the only one who has spent time working on herself. Andy asks about the changes LeeAnne is making. As we all know, LeeAnne does her meditation which I guess is working. It’s sometimes hard to tell. What we didn’t know is she also sees two therapists: one for her personal life and one to help her cope with being on the show. Again, it’s sometimes hard to tell but I can’t exactly call her a liar. Luckily, I don’t have to because Brandi did it. Brandi tells LeeAnne that a mutual friend of theirs named Tiffany told her that LeeAnne does not go to therapy. Then Brandi tells her to name her therapists, offering to name her gynecologist in exchange. LeeAnne declines both.

However, she does go into what she’s learned about her anger issues and it turns out they’re caused by her brain. Just like every other human on the planet. D’Andra says LeeAnne uses her anger brain as an excuse to do the things she does. Cary comes to her defense, and D’Andra snaps back, telling Cary that she hasn’t had an opinion all season and now all of a sudden has one. If you’ve all been watching the same show I have, you know Cary has had tons of opinions. And they’ve all been funny. Andy tries to wrangle them back in, telling LeeAnne that she has seemed more restrained, to which Brandi comments, “yeah, until the cameras go down.”

Now it’s time to talk to Cary. Andy asks about the comment LeeAnne made about Cary’s husband, Mark, getting serviced by someone who is not his wife or of her gender. (Listen, that’s the most PG way I can put it) Cary says that the rumor originated from a disgruntled florist and they’re past LeeAnne spreading that rumor. In fact, LeeAnne and Rich just had dinner at Cary’s house. Guess who gets pissed about this? That’s right! D’Andra jumps in and asks in what universe that would happen after what LeeAnne said. Well, this just isn’t D’Andra’s night because Cary is basically like “oh yeah, what about the nasty things you said about my business and Brandi’s?”

What?? Kameron whips out her phone and shows a text that appears to be from D’Andra talking about her annoyance at having to attend the grand opening of both businesses. In true presidential form, D’Andra claims she never sent that text. She even shows Andy her phone like nobody knows about deleting texts. The text isn’t on D’Andra’s phone, but LeeAnne has an explanation for that. She claims D’Andra has two phones. “I do not have two phones!” D’Andra screams. Kameron is pissed and demands that they call AT&T so she can prove D’Andra sent that text. Andy then asks Brandi if she thinks Kameron would make something like that up. Brandi says she doesn’t think Kameron would but she does think LeeAnne would.

In an attempt to bring it back to positive, Andy asks LeeAnne about her Infinity dress. She hasn’t had anyone interested in it yet but she’s working on it. That’s nice. Unfortunately, that goes into a discussion about LeeAnne’s behavior. Stephanie says that at the beginning she seemed to have it together but by the end of the season she appeared triggered.

Could she be talking about Travis’ going away party? Yup! Andy asks Brandi if she thought LeeAnne was going to hit her and LeeAnne chimes in with “or did you want me to hit you?” All of the women agree that Brandi was in LeeAnne’s face and she’s really the reason LeeAnne flipped. Andy asks how they went from working on being friends to where they’re at now. LeeAnne wants to know, too, asking Brandi “what set you off about me?”

This question sets off Brandi. Brandi brings up the conversation LeeAnne had with D’Andra warning her about Brandi. Being the voice of reason, Stephanie says they just never really worked out their friendship and that’s why they couldn’t make it work.

That or Brandi also didn’t like the fact that LeeAnne called her an alcoholic. Andy asks LeeAnne about those comments and LeeAnne claims she made them during a time where she was drunk herself and also tired. Stephanie comes to Brandi’s defense and says that Brandi doesn’t have a drinking problem, and LeeAnne finally offers a sincere apology or her comments.

From there it just gets weird. Andy asks LeeAnne about her blog post where she mentioned recording the conversation she had with Mama Dee regarding her concerns about D’Andra’s out-of-control drinking with Brandi. Apparently, that wasn’t true. She never recorded the conversation. She says things to have her back when she thinks no one else is and it seems like LeeAnne has traded her anger in for fibbing.

Part two is next week and personally, I’m interested to find out what D’Andra claims to know about Rich. What are you excited to find out about? Comment below!