RHOD Recap: A Recipe For Disaster 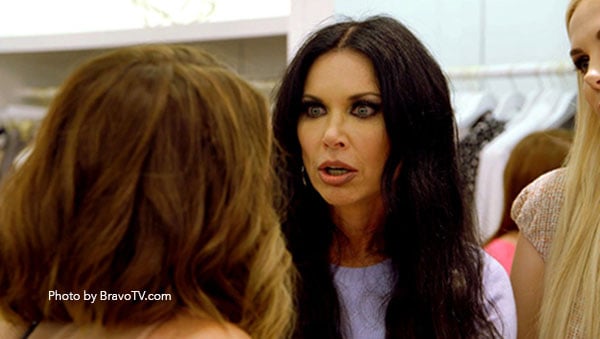 In high school, I belonged to approximately zero groups. No matching senior shirts with my friends. No weekly meet-ups. My high school years consisted of spending time with of a couple of people who enjoyed writing jokes about others. I know, hard to believe. Being a part of a group just never really appealed to me, it always seemed like too much work – way too many people to try and make happy. Based on “society” standards detailed in #RHOD, it turns out, I was right.

Let’s kick things off with D’Andra Simmons: the one who’s most likely to get kicked out of her “society” group. Since Mama Dee is retiring (maybe), D’Andra is moving forward with her plan to rebrand the company, beginning with her portion of the business: Hard Night Good Morning. It works just like it sounds. You go out, get super drunk, wake up the next morning, use her product, and even though you have a hangover that makes you wish for death, you look like one of those models who does face wash commercials. I think, I’ve never used it.

Anyway, D’Andra’s husband is her photographer which is convenient as she’s still not done talking about her problems with LeeAnne Locken. D’Andra tells her husband that she’s stressed about the cooking lesson her mom has arranged as LeeAnne is going to be there and they’re still not talking. I don’t know how he didn’t know this but D’Andra tells him what LeeAnne said about her being an alcoholic because of her drinking with Brandi Redmond, to which her husband replies, “I can count on one hand the number of times you’ve gotten drunk with Brandi.” So that settles that. In addition to not understanding the alcoholic comment, he also doesn’t understand why D’Andra is going through with the cooking lesson with LeeAnne and her answer is basically “because of my mom.” I get it. Now’s not the time to upset Mama Dee.

While D’Andra vents to her husband, LeeAnne vents to Cary Deuber and Kameron Westcott. Kameron is hosting the grand opening of Elizabeth W Boutique, primarily because she knows a bunch of rich women who can buy things – two of those women being Cary and LeeAnne. Before anyone can pull out their wallets, LeeAnne immediately goes into her mini-saga, “D’Andra and Brandi Said…” She tells Cary and Kameron that D’Andra told her that her relationship with Rich was fake, which is comical to Cary since LeeAnne and Rich have been together for nine years. LeeAnne goes on to tell Cary that D’Andra is drinking too much and that Brandi is an alcoholic, and that everything will all come out in the wash. She follows that up by taking a BIG swig of her wine.

She doesn’t stop there. She brings up the fight she had with Brandi at the 80s party AGAIN, then tells Cary and Kameron that she’s nervous about the cooking lesson because of her current relationship with D’Andra. She tops all of this off by reaching down deep and pulling out memories from her high school years, recalling her time spent with her head in her locker, crying because girls were mean, and reminds us that she’s no longer that person and WILL fight back. You’ll cut a b!*^%$, LeeAnne. We get it.

D-Day (which is what this cooking lesson should’ve been called) is here, and the first to arrive is D’Andra. Side note: find you a friend like Marian who lets you use her kitchen because you don’t want to get yours dirty like Mama Dee didn’t. Anyway, D’Andra takes a minute to appreciate Mama Dee and Marian’s friendship: they’ve been friends for 40 years and have made it through some pretty nasty fights. This gives D’Andra hope for her friendship with LeeAnne. LeeAnne has the same idea, kind of. She hopes this cooking lesson will help Dee see what’s going on with D’Andra and try to fix her.

The cooking lesson begins with an opening speech by Dee telling the women that it’s important to know how to cook because that’s the way to a man’s heart. And, ok, I’m no prude, but did anyone else see the irony in LeeAnne’s detailed explanation (visuals and all) on how she keeps Rich happy after all of her judgement on Brandi? Anyway, before they begin to cook, Mama Dee gives baby D her apron, and it says Queen Bee on it. Mama Dee may like you, LeeAnne, but it looks like she likes her daughter more (sometimes). Kameron and her mother-in-law, Jimmy (who is basically Dallas’ version of the Queen of England), arrive and, well, it looks like excessive drinking isn’t OK in “society” but excessive amounts of plastic surgery is? I guess I just don’t know how to be rich.

Back to the cooking. Mama Dee and Marian are teaching the women how to make meatloaf with the main ingredient being ketchup. Once the ketchup casserole’s are in the oven, Kameron begins the inquisition. She asks D’Andra if she had fun at Cary’s grand opening, which, of course she didn’t. D’Andra tells her about her conversation with LeeAnne and LeeAnne’s comments about D’Andra having a problem with alcohol, which prompts LeeAnne to chime in and say that she never said that, she merely said she was concerned. D’Andra doesn’t help her own case by saying “that’s not what I heard.” Then, Kameron begins to lecture D’Andra on the appropriate amount of drunk to get which is the perfect time for Mama Dee to call LeeAnne over and have a chat.

While D’Andra gets lectured, LeeAnne tells Dee what D’Andra said about her relationship with Rich and for the love of God I really hope this is the last time we have to hear her tell this story. LeeAnne then tells Dee about her concern over D’Andra’s drinking and how it’s gotten worse since becoming buddy-buddy with Brandi, proclaiming that Brandi only appreciates the drinking portion of their friendship. Mama Dee’s advice is pretty much “you need to fix the friendship.”

Meanwhile, Jimmy has joined in the conversation between Kameron and D’Andra and the Godfather has come with a message: people in “society” are talking and judging you. She then goes on to tell a story about Kameron and a friend she used to have that had a bad reputation which looked bad on Kameron so Jimmy told her she needed to end the friendship. “Society” sounds more like a punishment than it does a social status. D’Andra can’t understand why she should do things or be around people who make her unhappy, to which Jimmy basically replies “LeeAnne is your friend.” Now that Jimmy has exposed that the reason she’s there is to control the people in her precious “society”, it’s time to eat! Actually, let me backtrack. As the women are trying to figure out their nonsense, the husbands are outside making fun of their nonsense. That should be reason enough to get it together, D’Andra and LeeAnne.

As everyone enjoys their meal, Mama Dee decides to give a speech. She goes into how food and friendship go together, brings up the death of her husband, and tells everyone that they need to choose their friends wisely and think about who they want to be around because you never know if you’ll see them again. I’m not crying, you are!

The next day, D’Andra and her mom meet D’Andra’s husband, Jeremy, at the Green Room where a mural painted from one of his photos is going to be unveiled. Everyone except Brandi and LeeAnne show up, with LeeAnne’s absence pissing off D’Andra the most because it was for a fashion show. After the unveiling, everyone heads inside for a drink at the bar, which is where all good things happen. Kameron and D’Andra talk about the conversation they and Kameron’s mother-in-law had and D’Andra tells Kameron that Jimmy hurt her feelings with what she said about people bad-mouthing her. She tells Kameron that she felt attacked, and this sets Kameron off. Kameron tells D’Andra that that comment offends her and is pissed that D’Andra is saying she felt attacked by Jimmy, following that up with “you don’t want to piss off Jimmy.” D’Andra asks Kameron if that’s a threat. Kameron storms off, and now D’Andra is in a fight with ANOTHER person in the group.

D’Andra immediately tells Dee what happened and you know what Dee said? Because Mama Dee is what this world needs (not deserves), she tells D’Andra that she’s going to deal with people talking bad about her and she needs to get over it and not care what people have to say. This advice would probably get her kicked out of “society” and she would probably lose her place on the show but it’s still good advice.

I know this storyline seems never-ending but that’s only because it is. One could almost forget that there are other people on the show. For instance, Stephanie Hollman. Stephanie is nervous about her husband going away to Harvard Business School for a month as she thinks he’ll come back believing he’s married to an idiot. He won’t and she isn’t and too prove his devotion is undying he’s buying her a brand new ring that costs $41,500 to give to her at their vow renewal. That’s not a typo. $41,500.

Cary is planning on heading to Copenhagen to visit/attend her cousin’s album release party. Her parents couldn’t be happier that she’s visiting family that’s so far away. How can she make this moment any better? She invites the girls along.

Be the first to leave Comments for RHOD Recap: A Recipe For Disaster