Home > Buzz Real Housewives of Dallas Recap: Off The Leash

Real Housewives of Dallas Recap: Off The Leash 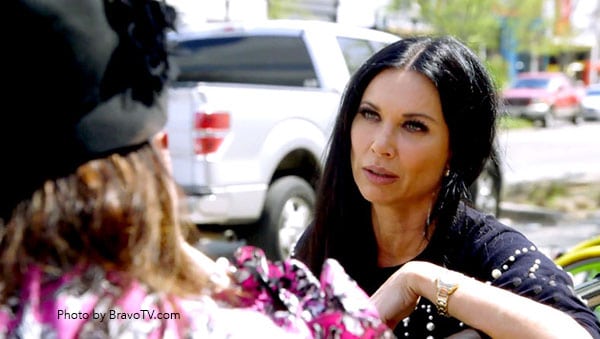 OK, I’m going to share a piece of my past with you, now that we’ve become friends and all. As a kid, crying got me nowhere. I’m half Hispanic, if that helps paint a picture. Anyway, crying for things that were considered #firstworldproblems got me grounded. Apparently, I grew up in the wrong part of Texas. In Dallas, when you cry you get businesses, fast food and a $250K wedding.

Let’s begin with D’Andra Simmons. Her stepson, Koen, is visiting from college and considering transferring to a university in Dallas. D’Andra is happy with the idea as it gives her a chance to make up for her relationship with Keeton, but I think also fills the void that has been left by her relationship with the woman who should be president: her mother, Dee. As D’Andra and Koen wrap up their conversation, and after four weeks of not speaking to each other, President Dee arrives to have a chat with D’Andra about the state of their relationship.

D’Andra begins the conversation by telling her mother that she wants to separate their companies as they can’t seem to get along, and she no longer wants to feel the stress and anger she has felt towards her mother. And then you know what happens? Dee is like “ditto” and tells her she can have the entire company. Just like that. No groundings. No kicking the walls. No “I hate you!”. Just, “here ya go, stop crying.” Dee explains that none of this is worth losing her only daughter so she’s OK giving her complete control of the company. Now that D’Andra has what she wants, they hug and are BFF’s again.

D’Andra isn’t the only one getting what she wants – while she’s getting a business, LeeAnne Locken is planning her wedding and I can’t tell who’s more annoyed: LeeAnne’s dog or her fiancé Rich. Rich joins her in planning the wedding except he’s really not taking it as serious as LeeAnne. You see, Rich has been married three times before so his attitude is very “been there, done that.” Literally. He loses those comedic chops quick, though, when she tells him the wedding is going to cost about $250,000. Sensing his mood shift she switches gears and starts talking about her strained relationship with D’Andra and how upset she is that she may not want to be involved in the wedding. That doesn’t have an affect on him as his response is “just call her.” She does and of course, the call goes to voicemail. With Rich still appearing to be in a daze after hearing the cost of the wedding, LeeAnne moves on to plan b: crying. After calling her situation “stupid girl stuff” he consoles her by giving her a hug and telling her it’ll be OK.

From planning a wedding to planning a dog painting party (it’s not what it sounds like), it’s time to check in on Kameron Westcott. Kameron is hosting a Painting With a Twist party and the “twist” is that the women will be painting portraits of their respective dogs. In addition to their dogs being invited, their kids are invited as well. I know. Anyway, have you ever been to a Painting With a Twist party? OK, this is more sophisticated than that. Kameron has hired a string quartet to play (only a trio arrives) and the party is really for her because she used to be an art major and wanted everyone to do something that she likes. Since no one has caught onto this, they all begin arriving. D’Andra is the first to arrive followed by LeeAnne, Cary Deuber and Stephanie Hollman. Brandi Redmond is on her way however, first she must pick up her demon kids.

While Brandi has finally hired a nanny to help her with Bruin, she has yet to hire a priest to help her with her girls. After picking them up from school she proceeds to tell them they will be attending a painting party, to which Brooklyn responds by flailing around in her seat, screaming that she would like to go home and then launching into a monologue about how she’s hot and is overheating. Brandi’s solution is to offer to buy her something if she stops. In my hood, this kind of behavior would have gotten me smacked with a chancla and grounded. In the RHOD hood, this kind of behavior gets kids McDonald’s. Because she has enough to deal with in these two, she decides to leave her dog at home. Also, she says the dog doesn’t get along with others, kind of like LeeAnne.

Brandi miraculously arrives at the party in one piece (physically, at least) and all of the women begin painting. Oh, just to give you an idea of how fancy this painting party was, LeeAnne couldn’t tell that the cookies were actually dog biscuits and she ate one. In her defense, they looked pretty good. After she eats a dog biscuit she returns to painting but is having trouble paying attention as she can’t help but focus on Stephanie and Brandi having a conversation. Then she notices D’Andra and Cary having a conversation. It’s all paranoia from there. LeeAnne eventually pulls Cary aside and asks her if anyone has said anything about her. Well, we all know Cary by now. Cary starts with the good thing people have said and then moves on to Brandi, telling her that Brandi said LeeAnne was feeding opinions to Kameron. LeeAnne thanks Cary and gives her a hug except it’s a fake hug because now LeeAnne thinks that both Cary and Brandi are messed up. So there’s next week’s episode.

The party eventually comes to a close and everyone leaves except for Kameron, D’Andra and LeeAnne. This gives LeeAnne the perfect opportunity to try and get D’Andra’s attention. It reminded me of this one time when the granddaughter of a family friend kept singing in front of me to get my attention but I ignored her until she finally went away. D’Andra did that. It really does work if anyone ever needs to use it.

D’Andra does eventually come around and meets with LeeAnne. She first talks about her mama Dee giving her the business and her hesitation in announcing the decision since it’s not final yet. That conversation turns into LeeAnne being hurt and believing that D’Andra doesn’t care how she feels. THAT turns into D’Andra believing LeeAnne brought up to the “$200 in the bank account” conundrum (we get it, you’re not poor, D!) in an attempt to deflect from her problems. She might be on to something because when she asks LeeAnne when the wedding is, LeeAnne says November (which we all knew) but could also be in the Spring time (which is definitely not November). This leads to D’Andra asking LeeAnne if she believes they’ll stay married and if she thinks he’s been faithful, claiming they both lead separate lives. This pisses LeeAnne off as she claims her and Rich are rock solid. Well, apparently, D’Andra has heard rumors about Rich being with other women but instead of saying that to LeeAnne, she tells her that she thinks something is going on that LeeAnne doesn’t want to admit to. LeeAnne proclaims there is nothing going on and with that, it looks like it’s LeeAnne’s turn to be mad at D’Andra. I wonder how Cary will involve herself in this fight?

That’s some pretty heavy stuff, so let’s talk about the few lighthearted things that happened. Kameron took a cooking/Spanish lesson with her kids, which I have to give her credit for. Stephanie took her two sons to a dance class to help her son, Cruz, with his self-esteem. More good mom credit. And then Cary talked about her strained relationship with her parents. Why is it strained? Well, if, as a kid, she was anything like the way she is now, I think we all know why.

I love this show but sometimes these women make me feel bipolar. Do they like each other or not? Who will I like this week? Will D’Andra and LeeAnne make up? Will Cary quit starting fights? Do you think D’Andra will really get the business? Wouldn’t it be great if Dee just referred to D’Andra as ‘Emily’ like in The Devil Wears Prada? So many questions! Comment below!

Be the first to leave Comments for Real Housewives of Dallas Recap: Off The Leash