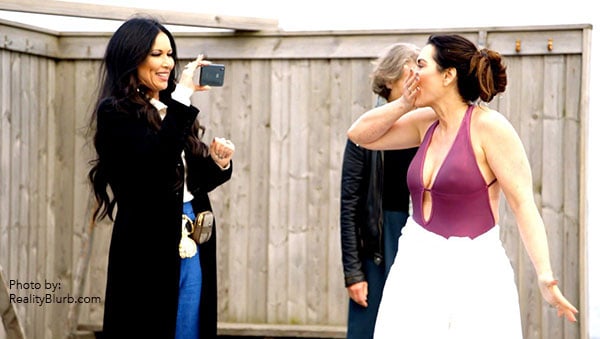 Hello! Welcome back! Don’t you love “to be continued’s”? My favorite is the kind that leaves you in the middle of a fight, wondering how it’s going to turn out. Well, your wait is over my friends. Here is what happened between Brandi Redmond and LeeAnne Locken……. Nothing. Brandi excused herself and then everyone except D’Andra Simmons and Kameron Westcott excused themselves.

Awkward, huh? Well, it gets more awkward. After going on and on about wanting to get to a place where she didn’t care what “Dallas society” thought of her, D’Andra apologizes to Kameron for hurting her feelings. D’Andra explains that Kameron knows her in a different way, and they both understand the pressure of keeping up a certain appearance which is basically why Cher and Dionne were friends in the movie Clueless. D’Andra tells Kameron she will do a better job of being a better friend to Kameron and that she appreciates Kameron for being a good friend to LeeAnne during D’Andra and LeeAnne’s friendship hiatus. They hug and Kameron tells D’Andra she believes her and LeeAnne’s relationship can be salvaged and, I have to be honest, that entire exchange was painful to watch.

The next day, the women gather to decide what the day’s events will hold. Cary Deuber wants everyone who is clinging on to their besties to separate so, with a choice of boating or bicycling, Kameron, Brandi, and Cary go for a bicycle ride while Stephanie Hollman, D’Andra and LeeAnne go on a boat tour. Oh, side note: while they were deciding who would do what, Brandi tells LeeAnne that she should go bicycling so she’ll look like the wicked witch. LeeAnne asks Brandi if she’s still pissed at her and Brandi is pretty much like “duh”. LeeAnne tells Brandi they need to talk and then walks out of the room. Stephanie and Kameron follow her and LeeAnne cries but without tears and starts with the D’Andra-does-worse-things-than-me-but-nobody-is-mad-at-her routine.

She finally gets over herself and they all head out. Oh, here’s one for you. Cary is an accomplished bike rider (i.e. doesn’t fall over) and you want to know why? BECAUSE SHE DATED LANCE ARMSTRONG, and I guess that made her a better bike rider via osmosis. Anyway, the women partake in their respective activities and, eventually, the boat and bicycle tour cross paths. D’Andra, LeeAnne, and Stephanie get off of the boat and go have lunch while Brandi, Cary and Kameron play on trampolines. LeeAnne and D’Andra seem to be getting along, an observation pointed out by Stephanie while D’Andra is in the bathroom. LeeAnne is like “yeah, we’re pretending nothing ever happened because that’s what you do when you’re old.” Forgetting things with old age, I’ve heard of. Pretending things just didn’t happen is a new one, and I gladly accept it. Anyway, D’Andra returns and Stephanie tells her and LeeAnne that they need to talk because she wants them to be friends again.

Stephanie cuts through the tension she just created by asking D’Andra if she loves LeeAnne. D’Andra is like “sure and also I didn’t think we weren’t friends.” LeeAnne tells D’Andra that she feels like D’Andra doesn’t respect her and then Jesus, Mary, and Joseph, D’Andra brings up LeeAnne telling people that D’Andra was broke. LeeAnne is like “ok, I apologized for that already” and the rest of us are like “get over it, D’Andra, we know you are not POOR.” D’Andra tells LeeAnne that she’ll work on being a better friend which makes LeeAnne emotional, I think. It’s hard to tell when her expression says she’s crying but the lack of tears and snot say she’s not. Either way, they’re friends again, at least through lunch.

Later that evening the girls reconvene at the hotel. Their last festivity for the day will be a trip to Tivoli Gardens, BUT FIRST, they have to put on the Danish outfits that Cary got for everyone. They all get dressed and head to the theme park. After riding some rides and frolicking in their get-ups, they all have a seat at a bar and have a huge beer. Then, Cary makes the mistake of asking everyone if they had a great day. D’Andra starts the answers off on a positive note, which then quickly turns when Cary brings up Brandi’s “wicked witch” joke, which then makes Brandi bring up ALL the things LeeAnne has ever said about her. Brandi then tells LeeAnne that she’s not apologizing for the witch comment, to which LeeAnne replies, “I don’t expect you to apologize.” Because Brandi didn’t get the rise out of LeeAnne that she obviously wanted, she takes it up a notch and tells LeeAnne that if she would’ve known LeeAnne wasn’t expecting an apology she would’ve called her a wicked bitch. Still keeping her cool, LeeAnne is like “look, I apologized to you for everything I said but you obviously don’t want to accept it”, and Brandi is like “nope, because it’s going to happen all over again”, referencing their past problems.

And so ends day 3. The next day, the women get dressed and head to Cary’s cousin’s house for lunch. As Cary gets reacquainted with her family, her daughter and husband walk in surprising her in what turned into a very touching moment that made Cary produce real tears, something LeeAnne may want to take note of. They all head inside for a lunch that is a bit too fancy for Stephanie – she tries pickled herring for the first time and lets us all know that it tastes like salty butthole. Luckily, they all toast which gives Stephanie something to wash the taste out of her mouth.

Following lunch, they all head to the Baltic Sea where the plan is to dip themselves (naked) into the water because apparently, it’s good luck. Cary has no problem getting naked in front of her family because it’s part of her culture. Stephanie is like “OMG, if my family did that I would need therapy for the next 15 years.” Same. All of the women except LeeAnne get in the water, all of them with the exception of Brandi have a full bathing suit on. Brandi goes topless, and while Stephanie doesn’t strip off any clothing, she does take out her weave so that counts for something. As they all swim and have a great time, LeeAnne captures the happiness on video with her phone. After the good luck swim, Cary kisses her family goodbye and all of the women get on a private bus and head back to the hotel.

Fun times, yes? No. As the women drink wine, Brandi tells LeeAnne that she needs to collect her phone to erase the video of her swimming topless. She then calls LeeAnne a vindictive bitch and claims LeeAnne took the video to use it against her later. Then, in her confessional, Kameron breaks the reality TV fourth wall and says “she’s filming a reality show that’s on national TV, why would she care about a video on a phone?” Every time I think I’ve had enough of Kameron, she says something that reels me back in. Anyway, the fact that she’s on a TV show has, apparently, not dawned on Brandi yet so she continues to badger LeeAnne about the video and makes her delete it.

Later that night they all have dinner at the hotel and, once again, Cary makes the mistake of engaging people in conversation. She asks everyone what their favorite part of the trip was, which sparks some very sweet answers until Brandi chimes in. Brandi says the trip was great right up until LeeAnne took video of her swimming topless. With an “oh good god” expression on her face, LeeAnne explains that she took the video to show everyone afterwards and have a harmful laugh – a memory, as all of us sane people would call it. Brandi doesn’t accept this explanation and asks LeeAnne how she would feel if the same thing was done to her. LeeAnne is like “the video is gone and if it ever surfaces, you know where it came from but it won’t because it’s gone.” This STILL isn’t enough for Brandi. Brandi tells LeeAnne that she believes LeeAnne always has an agenda and then goes off the rails by saying that if LeeAnne is mad at her she won’t confront her but will bad mouth her and spread rumors.

LeeAnne tries to defuse the situation by saying she would never go there again. She tells Brandi “I’m sorry you don’t trust me” and Brandi responds with “I don’t think anyone here trusts you.” And with that, we’ve got another “to be continued” on our hands.

What do you think will happen next? Will Brandi’s head quit spinning? Will LeeAnne ever not be in a fight? Will Stephanie be able to find something to eat that doesn’t taste like a butthole? Comment below!

Be the first to leave Comments for RHOD Recap: Growers and Show-ers