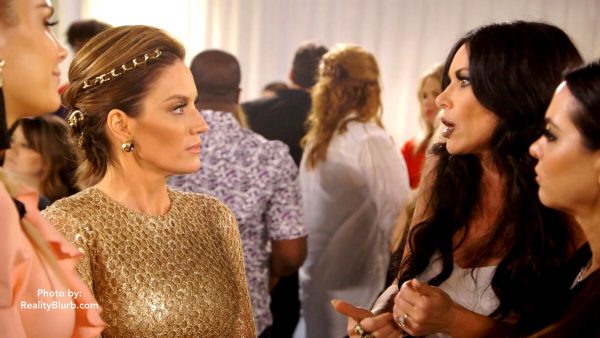 Let’s jump right in, shall we? It’s the end of the Denmark trip and what better way to end it than with a rich person fight? Brandi Redmond has just told LeeAnne Locken that she doesn’t believe anybody trusts her, however, not all of the women agree. Kameron Westcott chimes in, saying she trusts LeeAnne. Cary Deuber piggy-backs off that comment saying she believes LeeAnne has gotten better, especially in the way she speaks to people. Kameron tells Brandi that she’s being unfair to LeeAnne, which sets Brandi off. Brandi questions how it’s unfair when she’s not talking about LeeAnne behind her back like LeeAnne has done, she’s saying everything to LeeAnne and in front of everyone else. Then, LeeAnne brings Stephanie Hollman into it – she asks Brandi if she believes Stephanie is pretending to be friends with LeeAnne, and then Brandi serves up a big cup o’ tea.

She answers with “honestly, I think you all are being a bunch of fake bitches.” And, with that, Brandi walks out. Stephanie gets up and says she needs to leave, getting emotional at the same time. AND THEN, she vindicates Brandi. In her confessional, Stephanie says that Brandi called them all fake bitches and she agrees, stating that they all know what LeeAnne is doing is wrong but no one will speak up. Stephanie feels caught in the middle so LeeAnne lets her know that she’s not, she can be friends with Brandi as LeeAnne would rather lose Stephanie’s friendship than watch her suffer like this. After laying it on so thick I could barely see what was happening, Stephanie gets ready to leave, but not before LeeAnne slaps on one more layer by telling Stephanie that she just doesn’t want Brandi to change the way Stephanie sees her. Stephanie is like “I’m my own person, I think for myself, it’s fine.”

She finally escapes and arrives at the bar Brandi has summoned her and D’Andra Simmons to. D’Andra explains to Brandi why she didn’t speak up and, during her confessional, Stephanie says that she should’ve been more supportive but this was her way of not getting involved and it wasn’t OK. The trip has finally come to an end and no one is happier than Cary – she’s staying for one more day to have a mini family vacation with her daughter and husband.

The women are back in Dallas and couldn’t be happier. LeeAnne is preparing for her fashion show where she’ll be launching her L-Infinity dress that can be worn 175 different ways. Kameron, who only likes American food, has lunch with Cary and we get more information on how the trip really ended. So it turns out that the night before everyone returned to Dallas, LeeAnne lost her phone and Brandi so happened to find it at the bar in their hotel. Brandi returned it to her and instead of gratitude, LeeAnne feels paranoia, believing that Brandi stole it in an attempt to go through it and see if she really deleted the video she took of everyone swimming in the sea.

Meanwhile, Stephanie and Brandi are hanging out talking about the same thing. Brandi tells Stephanie about the incident and then gives us some more details: LeeAnne has told people that she cloned Brandi’s  phone. It so happens that Kameron is one of the people she has told, and now Kameron is letting Cary in on LeeAnne’s secret talent. Cary thinks it’s ridiculous and a little creepy, which it is, and Kameron is like “I don’t know if she can really do that.” Whether she did or didn’t, Brandi now hates LeeAnne even more.

LeeAnne isn’t worried about it because she has a fashion show to worry about. The day of her show has arrived and the women, most of them, are preparing for it. Cary gets dressed at D’Andra’s house and they chat a bit about the trip. They call Brandi to check in and Brandi won’t be attending the show as she was not invited. They ask her about “cell phone clonegate” and Brandi doesn’t know if LeeAnne really cloned her phone but wouldn’t put it past LeeAnne. D’Andra thinks LeeAnne is crazy, but in her defense it’s because LeeAnne is crazy. Anyway, after they hang up with Brandi, Cary tells D’Andra that she met with Kameron and Kameron told her about D’Andra being on friend probation. This really pisses D’Andra off. D’Andra thinks Kameron is taking a jab at her and Cary is like “oh Jesus, it’s not that deep, friend probation isn’t a real thing.”

While D’Andra internally loses it, LeeAnne puts the finishing touches on her event. People start arriving including Cary, D’Andra and Kameron. After some small chit-chat (where LeeAnne says Rich is out of town and D’Andra is like “mm, hmm”), the show begins. OK, so it turns out that the dress can be worn 175 different ways because the attachments come in different colors. Kameron believes this dress will go down in fashion history but I don’t work at Vogue so I wouldn’t know. After the show, LeeAnne is introduced as the Queen Bee, then walks down the aisle wearing what appears to be a modern looking wedding dress. D’Andra knows what’s up – she believes LeeAnne is taking a dig at her and, based on LeeAnne’s confessional, it turns out she was right.

LeeAnne toasts her team and mingles while Kameron, D’Andra and Cary talk. Kameron asks where Stephanie and Brandi are and Cary explains that it’s Travis’ birthday so Stephanie couldn’t make it, and D’Andra tells Kameron that Brandi wasn’t invited. Kameron asks her if she was surprised by that and then they talk about the phone just as LeeAnne walks up. Cary congratulates her, while D’Andra is like this isn’t your wedding dress right? Then D’Andra is like “I’m glad I made it and I would’ve come hell or high water, even if we weren’t talking.” LeeAnne is like, “oh, I wouldn’t have invited you.”

D’Andra is like “I’m trying to mend our friendship and she takes a jab at me”, which, OK, D’Andra has taken her own shots at LeeAnne and I guess has already forgotten. D’Andra continues to try by saying they’re like sisters and she could’ve opened LeeAnne’s phone with Face Recognition because they look alike. Where do you think that comment leads? They start talking about “clonegate” and LeeAnne admits to making everything up in regards to cloning Brandi’s phone. Cary thinks this makes LeeAnne sound insane, because it does. D’Andra tells her what she did wasn’t nice and LeeAnne is like “well then don’t steal my phone!” THEN, Kameron says that she does think Brandi took the phone to see if LeeAnne still had photos of the skinny dipping adventure and Cary is like “uh, you said you didn’t think she took it”. And you want to know what Kameron’s response was?

“I go back and forth”. OK, President Westcott. This annoys Cary, as it should, because Cary hasn’t forgotten about the time Kameron said Cary plays both sides. The entire situation annoys D’Andra because, as she explains it, if LeeAnne is resorting to her old tricks then she obviously hasn’t changed.

Other than LeeAnne showing us her crazy, here are a couple of other things that happened. Cary paid a visit to her parents and because of her trip to Denmark, is on the fast track to mending her relationship with her father. And, while in Denmark, Kameron came to the realization that she wants to spend more time with her family, doesn’t want to give up her girl trips, so she’s going to take a step back from Sparkle Dog and find a business partner who will work so she doesn’t have to. Working isn’t as easy as it looks, is it Kameron? Welcome to the real world.

Next week is the season finale and here’s what I want to happen: everyone sees how nuts LeeAnne actually is, D’Andra gets over how people feel about her, Brandi finds her real friends in the group, and me and Stephanie becomes friends in real life. How do you think it will end? Comment below!

Be the first to leave Comments for RHOD Recap: Game of Phones