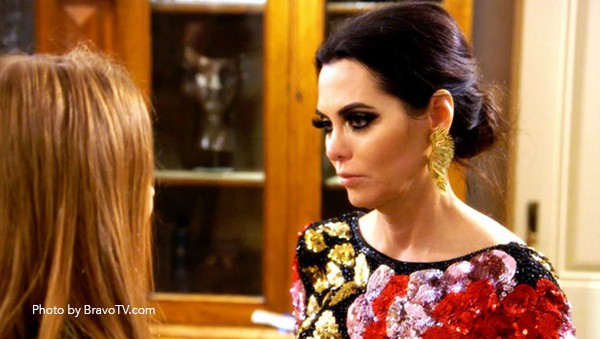 There are some things about Texas that are undeniably true. First, Whataburger is better than In N’ Out. FACT. Not arguably, not questionably. It. Is. Second, there is no second. Whataburger is it. There is also, however, a common misconception that we’re all rolling around in money like Scrooge McDuck. I wish I could say that’s true but it’s not, at least not for me. Fortunately, I may have found my money. Unfortunately, it looks like it was spent on over a million dollars worth of renovations on Stephanie Hollman’s house. Yes, welcome to the Real Housewives of Dallas where, thanks to them, no one will believe me that we’re not all wiping our bums with $100 bills.

If you’ve been watching this show from the beginning I have to apologize; I just tuned in for the first time so instead of my typical recap, I’ll be writing about my introduction to their characters while giving you an update on where they’re at. Ready? Too bad, I’m starting.

I’m first introduced to D’Andra Simmons. I’ve been invited via television to her and her husband’s 4th wedding anniversary party and it’s a fancy one. Her husband, Jeremy, gave a speech about how hot D’Andra is and how she still makes him horny – it was very sweet. Then her friend, Jenn (not me), gave a speech and called out a woman named LeeAnne Loken (we’ll get to her), asking when her and her boyfriend would be getting married. Her boyfriend responded with “I just sharted”, which was also very sweet. That was enough to make LeeAnne turn her attention to Stephanie, whom she apparently hated last year and also the woman who, if you’ll recall, spent my imaginary money. That conversation got pretty deep. They both talked about not being able to drink alcohol because it makes them depressed for days afterwards, except they were both drinking so I’m not really sure where that conversation was going. But at least they appeared to not hate each other anymore so that was pleasant.

Unfortunately, because this is Real Housewives things don’t stay pleasant for long. A woman named Brandi Redmond arrived to speak with D’Andra. As it turns out, D’Andra had been spreading rumors about Brandi, claiming she was a drug addict who was addicted to adderall. Before they began their chat they took a shot of tequila like they were both addicted to it so I just don’t think we should be spreading these kinds of rumors. Anyway, that conversation turned a little to high school for me – it pretty much went like this: “I heard you didn’t like me” “What, I never said I didn’t like you, I heard you didn’t like me.” Right before I imagined myself pushing one into the other, a woman named Cary Deuber, LeeAnne, and an incredibly drunk Stephanie intervened. After slurring her way between them, Stephanie is helped outside and then for reasons unbeknownst to me, tried to climb on the lion statue. All in all the party wasn’t bad.

At least it wasn’t for me. The next day Stephanie is super hungover but can’t lay in bed all day because now it’s her turn to plan a party. I guess not everyone hates Brandi because Stephanie is throwing a party in honor of Brandi’s son, Bruin, whom Brandi just adopted. After meeting with the event planner, Stephanie Facetime’s Brandi to discuss the guest list. It may have been the sleep deprivation talking but she decides to not leave anyone off of the guest list.

While Stephanie plans her party, the best showdown I’ve seen in a while goes down. OK, so here’s the deal you probably already know: D’Andra is business partners/works for her mom, Dee. Well, D’Andra claims that her mother gave her the keys to the business and said she was stepping down, leaving D’Andra to make all of the business decisions and essentially take over the company. However, when D’Andra visits with her mom to discuss new packaging for one of Dee’s products, Dee all but loses her s***. Dee rejects D’Andra’s repackaging decision, then tells her that she’s still in charge, and then basically tells D’Andra that sometimes mothers and daughters are jealous of each other and D’Andra needs to stop being jealous of her. It was incredible. D’Andra goes on a tangent during her personal interview, claiming she’s not jealous because her skin is flawless and her face still moves when she makes a facial expression. No, she’s not jealous at all. Nope.

D’Andra tells Dee that she’s going to find an investor for her part of the company and go her own way, to which Dee replies “go ahead, you can sell on the corner if you want.” This fight just kept getting better and better. Finally, D’Andra waves the white flag and sulks all the way back to her office. She explains that as long as her mother has financial control over her they’ll never have a real mother-daughter relationship. What she left out was, she’ll never be the boss, she’ll always have to do what her mother tells her, she will always have money solely because of her mother – she’ll basically be everyone who’s 18-years-old and still living at home.

Between the fight that looked like a scene taken straight out of Dynasty and Stephanie’s party, nothing awesome happened. Stephanie’s mom and grandparents paid her a visit; she grew up in Oklahoma and misses the simple life. Her family is very religious and they pray over her home. And then Stephanie discusses her suicide attempt at 22-years-old with her mother. Her mom expresses how proud she is of Stephanie for giving LeeAnne another chance and not being a jerk to her. So far Stephanie is my favorite.

Cary’s house is being renovated so her, her husband and their daughter are staying at her parents house in Florida.

I take back what I said about nothing awesome happening. So, LeeAnne is an aspiring fashion designer (I guess?) and is having a dress designed that can be worn several different ways – kind of like the Chanel suit that Marge Simpson got and kept tailoring to look like a different outfit. Like that. LeeAnne has teamed up with a stylist named Jeannette and together, they’ve made this dress a reality. It’s alright. Now her goal is to get it on a home shopping network.

Bruin’s big debut party has finally arrived. Brandi is trying to get ready and then rubs it in our face that to get things done she needs to wake up at 7AM. Hang on, I’m waiting for my eyes to roll back into focus.

Anyway, Brandi, her husband and all of their kids arrive at Stephanie’s. Get this, Stephanie spent nearly $23,000 on this party. $23,000! Like it was nothing! How am I supposed to convince people that we’re not swimming in hundo’s when she pulls a stunt like that?! Brandi is overwhelmed, as am I, by it all but doesn’t have a lot of time to take it all in as people are starting to arrive and her and her family need to hide. You see, nobody knows exactly what this party is for. Someone does end up sort of guessing what’s going on, and that person is Satan in the flesh, Kameron Westcott. She. Is. Horrible. First, she criticizes the fact that she wasn’t greeted at the door, which is something that should always be done because they’re southern. OK, but this isn’t the 1900s south so please shut up, Kameron.

Anyway, Kameron the devil pulls Stephanie aside and tells her she’s figured it out: someone is having a baby and it’s a boy. Stephanie tells her that she’s found a surrogate and it’s actually her who will eventually have a boy – and damn if Kameron doesn’t spend the next who knows how long running her mouth to everyone about how she’s figured it out. While the queen of evil is doing her best to ruin the party, LeeAnne shows up with some new hair that was very Xtina Aguilera circa 2001. It was alright. Stephanie is extremely happy to see her, probably because she can now reveal Brandi and her son which will hopefully shut Kameron up, except of course it won’t. As Brandi and her husband reveal their son like he’s Simba (the only thing missing was Elton John’s “The Circle Of Life” playing in the background), Kameron has a look on her face of disgust – she’s blown away that she didn’t accurately guess the surprise, or at least I think that’s what she’s p**sed about. I genuinely have no idea because I was too scared to stare at the TV for too long while she spoke and had to walk away – I didn’t want to chance turning into stone.

Now that we’re all caught up (and by we I mean me), where do you think they’ll go from here? Will D’Andra finally break away from her awesome mom? Will Brandi become friends with everyone again? Do you think LeeAnne should take her dress to Shark Tank? Comment Below!

Be the first to leave Comments for Real Housewives of Dallas Recap: Bubbles and Brooding