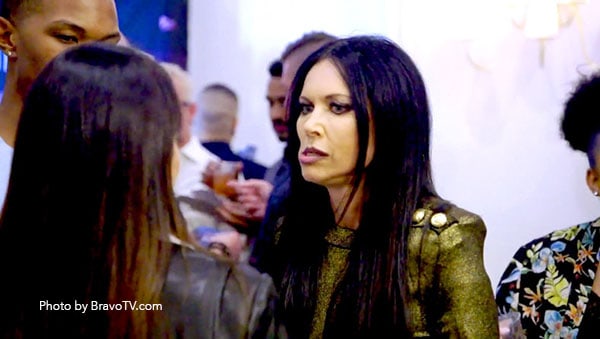 Kameron Westcott may not want to hear this, but her and I have something in common: we were both born in the 80s. While she may not remember much about the decade, I do. I remember my parents lying to me that Duracell no longer made batteries for my Teddy Ruxpin because they were tired of listening to it.  I remember not being able to use my Easy Bake Oven because my mom said I would burn the house down, even though it only used a 60 watt bulb. And circle back around to me when you want to talk about Rainbow Brite and how my doll didn’t come with a rainbow belt, THE THING THAT MADE HER POWERFUL.

Yes, the 80s were some fun times. I know that sounds sarcastic, but if you compare my 80s experience to the one the women just had, I believe I’m coming out on top.

Before we Back to the Future this recap, let’s start at the beginning: Stephanie Hollman meets Kameron and LeeAnne Locken for lunch in an attempt to get to know them on her own, or at least that’s her take. MY take is that LeeAnne was trying to set up Stephanie and Kameron, or at least that’s what it looked like. Almost immediately after getting their drinks, LeeAnne begins bad mouthing Brandi Redmond, telling Stephanie that she missed witnessing Brandi’s beer bong at the rodeo – the rodeo that happened so 4 episodes ago. Not only has LeeAnne forgotten that the rodeo was a long time ago and we’re not talking about that anymore, she has also forgotten that she actually drank from that beer bong and made all of us nauseous with her uncontrollable gagging. That conversation turns into a more light-hearted when Stephanie discusses her need for vaginal rejuvenation, and then LeeAnne brings it back to bashing when she brings up the conversation she had with Cary Deuber at Kameron’s painting party.

LeeAnne had quite a bit to say, so much so that she was too busy to notice her ears were burning as Brandi and D’Andra Simmons were having a similar conversation. Over a much needed bottle of wine, D’Andra tells Brandi about her outing with LeeAnne and the conversation they had regarding LeeAnne’s relationship with Rich. D’Andra doesn’t believe they’ll get married as she’s heard multiple rumors about Rich cheating on LeeAnne, but she’s not about to tell LeeAnne what she’s heard because she knows if something happens it’ll be her fault and also she’s not Cary. Both lunches eventually come to an end with LeeAnne, Stephanie and Kameron discussing the No Tie Fundraiser and Brandi and D’Andra getting W.A.S.T.E.D.

Later that night, LeeAnne attends a black tie event benefiting the LGBTQ community. Apparently, social events in Dallas are important when you’re in the high society club, a tid-bit LeeAnne believes D’Andra has forgotten since becoming besties with Brandi. Well, LeeAnne, D’Andra has not forgotten. She shows up. With Brandi. Both drunkety drunk drunk. Like, one eye closed drunk. LeeAnne is pissed that D’Andra brought Brandi and even more upset that they showed up about 10 minutes before the event ended. Oblivious to this, D’Andra greets LeeAnne and LeeAnne can’t help but notice that D’Andra is a little on the inebriated side, so it’s the perfect time to tell her that she’s not happy she brought Brandi after what Brandi said to Cary. D’Andra tells LeeAnne that her and Brandi need to talk it out and not a moment too soon – an even more inebriated Brandi walks up and LeeAnne takes this opportunity to interrogate her, killing mine and Brandi’s buzz (I joined them for lunch but at my house).

Anyway, during her testimonial, LeeAnne makes fun of the fact that Brandi is sloshed which actually looks worse on LeeAnne for trying to talk rumors while she’s in this state. Brandi doesn’t really care though, she has a nanny and can do whatever the f&#$ she wants now. They continue to argue and nothing gets resolved because Brandi is drunk and LeeAnne denies things that she’s said in the past.

From one fundraiser to the next, the women prepare for the 80’s themed No Tie Fundraiser. Because Brandi and Stephanie have the best senses of humor, they dress up as prom king and queen and look awesome! Kameron looks like 80’s Malibu Barbie. LeeAnne looks like she got the decades mixed up because her ensemble is very 90s. Cary looks like how people look when they get invited to an 80s theme party and dress up based on what they saw in an 80s movie. D’Andra looks like a groupie for Poison. Together, they made a very eclectic group. Brandi and Stephanie ride together and while they make their way to the party, Brandi tells Stephanie about her drunk conversation with LeeAnne. Brandi believes that LeeAnne is using Stephanie to get under Brandi’s skin and I’m starting to believe that myself. Meanwhile, LeeAnne is talking about the same thing – her conversation with Brandi. And then, something happens. A shift. And it was caused by Cary. While LeeAnne pokes fun at Brandi’s drunken stupor, Cary interjects by defending Brandi. Her first step to not sucking like she has the last few episodes. Eventually, all the women end up together, which means it’s about to go down.

Brandi pulls LeeAnne aside to discuss their last kerfuffle. LeeAnne starts off by telling Brandi she was pissed that Brandi showed up to the black tie event drunk. Brandi is like “I have three kids”, which sounds reasonable to me but not to LeeAnne. Then Brandi tells LeeAnne that she’s been acting different and she thinks it’s because of personal problems she’s having with Rich, bringing up the fact that they haven’t set a date for the wedding. LeeAnne tells Brandi it’s none of her business (which, in fairness, it’s not) and then one-ups Brandi’s comment by saying “how would you like it if I said you adopted a baby to save your marriage.” Check mate – and I don’t even really like LeeAnne. Brandi is basically like “oh yeah, well you’re jealous of D’Andra because she’s married” and this spiraled so quickly I had to watch that scene twice.

Brandi walks away as D’Andra walks up and the fight picks up from there. LeeAnne starts in on D’Andra with her “me and Rich don’t live separate lives” spiel, something D’Andra doesn’t believe. What she does believe is that LeeAnne is holding out information on her relationship and D’Andra can’t help her if she doesn’t know what it is. I don’t recall LeeAnne asking for help, but I may have just not heard her over the other women fighting over other stuff. Anyway, LeeAnne is pissed at D’Andra’s assumption of her relationship and old-LeeAnne begins to make her return. She threatens to, I don’t know, rain fire on the group if they don’t knock it off but D’Andra shuts that down quick by telling her not to talk to her like that. Then D’Andra tells LeeAnne she probably won’t get married and LeeAnne decides now’s the time to admit defeat: she tells D’Andra she isn’t going to argue with her and walks away. Maybe that meditation is working?

It wasn’t all screaming, though. Off in the distance and away from the fight, Cary apologized to Brandi for telling LeeAnne what she said about her. Cary is turning over a new leaf. After Stephanie’s vaginal rejuvenation, they discussed Cary’s actions over the last few weeks (i.e. all of her tattle-telling). Stephanie (my new favorite) pretty much told her to quit doing that and Cary (my old favorite but if she sticks to this she may be able to share the title with Stephanie) has agreed.

Do you think Cary will be able to quit telling people’s secrets? Is D’Andra right about LeeAnne and Rich? Who else loves Stephanie?! Comment below!

one Comment for Real Housewives of Dallas Recap: 80’s Ladies