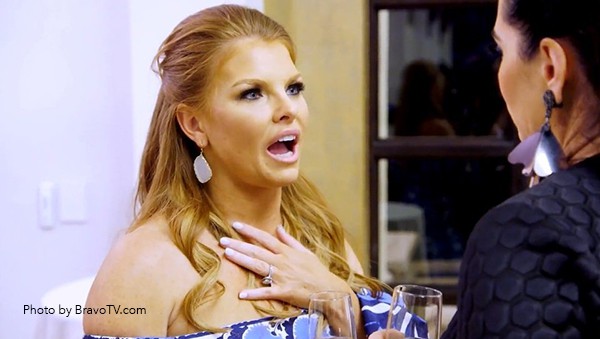 Well, it looks like I’m not the only one who shouldn’t bring friends to Colorado. In case you missed it in my Southern Charm Savannah recap, I opened with a lovely story about vacationing in Colorado with my husband and another couple we’ve been friends with for a while, and we haven’t heard from them since we got back. That was a few weeks ago. Again, it was probably us. But at least now we know. Kameron Westcott does not.

So, remember last week when Stephanie Hollman hosted a party for Brandi Redmond to show off her newly adopted son? Well, we’re back at that. Yes, Kameron is still mad – she still doesn’t understand why Brandi kept the baby a secret, stating “she’s not Beyonce.” She’s not the only one confused by the baby secret: LeeAnne Loken is surprised by Brandi adopting a baby as is D’Andra Simmons, who thought Brandi and her husband were getting divorced. Hang on, there’s more stuff to get past. During the party, Brandi pulls LeeAnne aside to let her know that she’s in a better place and really hopes they can be friends. Apparently, last year they had problems and during the reunion, Brandi said her and LeeAnne had no future. LeeAnne just wants to move forward so she takes the high road and accepts Brandi’s real-life friend request. OK, this is my first season watching the show and I’m starting to believe that Brandi was somewhat of a nightmare because even Kameron, the devil’s helper, comments about Brandi’s new disposition, citing she must’ve given birth (her mistake but Kameron can’t be bothered with details) to a magical baby who takes away negativity.

This positivity appears to be contagious. (If you would like some of it I believe you can find it in the bottles their drinks came from.) Kameron asks LeeAnne about her and Brandi’s conversation and is happy that everyone is getting along, which gives her and her buzz the idea of inviting the women to Beaver Creek, Colorado. It only makes sense that, as Kameron does something nice, somewhere off in the distance negativity is brewing. D’Andra approaches Brandi and congratulates her on the adoption, which then turns into Brandi confronting D’Andra about the drug addict rumor. D’Andra says she never said anything about Brandi and that it was a general statement aimed at no one. Brandi claims to have a source but like all high school fights go, doesn’t tell her who it is. Eventually, Cary Deuber interrupts and separates them. D’Andra tells Cary about the confrontation to which Cary replies, “I’m the one who told her about that.” D’Andra asks why, claiming there was no reason to since her comment wasn’t about Brandi, which led to Cary making a Paul Rudd face and letting us know that D’Andra, in fact, told her that comment was specifically about Brandi. This exchange upsets D’Andra even more, prompting her to say “Brandi can enjoy her baby and her Adderall.” So Colorado should be great.

Now that there’s nothing left to fight about (for now) the party is finally over and it’s time to get ready for Colorado. Kameron has bought all of her frenemies pajamas to wear on her PRIVATE JET. Mmmmm, nope, I still couldn’t be her friend. Side note: LeeAnne calls the pajamas “jam jams” in a baby voice and I’m sorry but if this is what meditation does to you I think I’ll pass. Anyway, while D’Andra packs she goes on and on to her husband about the confrontation and how she’s not excited about the trip and blah, blah, blah. Her husband keeps trying to tell her to be done with it but because D’Andra likes to hear herself b**ch, she talks over him. Finally, he shuts her up by telling her if she doesn’t let him talk then he’s not going to hang out with her while she packs. Her response is to show off a new shirt.

The women arrive at the hangar, each wearing their pajamas except for D’Andra (of course). Before they board the plane, Kameron passes out an itinerary detailing what their weekend in Colorado will look like. Yeah, an itinerary. The best response to the itinerary is Stephanie’s: “all we need is liquor and Jesus” – which is also true for any occasion.

Kameron says she’s excited about this girls weekend, claiming that as a child she was the queen of slumber parties and I just feel like that’s not true. She gives the women a tour and yeah, there’s an elevator. Castle. My new best friend, Cary, claims her poo bathroom. While the women explore the house (castle), Brandi and Stephanie sneak away to hang the poster in Kameron’s room. They tape it to her bed and truly believe that Kameron will be OK with it and finally understand that it’s OK to be stupid sometimes. How is it that I already know Kameron better than that? Anyway, Kameron finds the poster and is (no duh) not OK with it. She believes that Brandi and Stephanie are hazing her and thinks the poster is just too much. You guys, the woman had a vacation itinerary; of course she would think this joke is too much. LeeAnne senses Kameron’s frustration and decides to teach her to meditate to help her work through it. I’m almost ashamed to admit this but Kameron and I had the same reaction to her meditating: we laughed, primarily because we both know it’s going to take a lot more than breathing with her eyes closed to turn her into someone fun. While LeeAnne tries to help Kameron work through her feelings about a damn poster, Brandi and Stephanie are doing what you’re supposed to do on vacation: they’re outside having fun. Cary is inside having her own fun: she’s making mojitos.

It’s dinner time in the castle and Kameron has hired a chef to prepare their meals for the night. They all sit down at the table and Brandi remarks that through her squinty eyes she can see that she and D’Andra aren’t getting along but doesn’t want to bring it up at dinner, choosing to talk to her away from the group. After their salads, Kameron attempts to be fun by playing a game of truth. Yeah, this sounds like it’s going to be a blast. Almost immediately, Kameron brings up the Brandi keeping her baby a secret thing, which means her “I can be fun” demeanor was a lie, proof that the devil has disguises. Kameron tells Stephanie she made her look like an idiot, which Stephanie explains weren’t her intentions, she just wanted to keep it a secret. Cary drinks through it and when she’s finally had enough, calls Kameron a badger and shuts her up. I’m sorry Stephanie but at this point, I don’t think you can replace Cary in my heart.

As if dinner isn’t awkward enough, drunk Brandi tells Kameron she wants to make out with her. Kameron isn’t having any of it as she’s still upset with Brandi for chasing her with a dildo. You know what? You can be my friend, Brandi. Brandi isn’t taking no for an answer and walks over to Kameron’s side of the table and kisses her. She then tries to make out with D’Andra who also isn’t having because she’s still p**sed about being accused of calling Brandi a drug addict, which she did. There’s a whole lot of “we’re not friends” going on for a bunch of women who HAVE to be around each other.

Anyway, Brandi is too drunk to care that no one wants to make out with her so she retreats to the hot tub where she and Cary get naked and hop in. LeeAnne goes to bed, thank god. Stephanie, D’Andra, and Kameron join the naked twins in the hot tub, and just when you think they’re going to bond and have fun, Kameron brings up that goddamn baby thing again. Drunk Brandi doesn’t want to fight (as she proved during dinner) and begins to cry. Kameron says she felt like they weren’t friends. No, you did not, Kameron, you were just upset that you didn’t know a secret like a 13-year-old. Stephanie comes to her defense, telling Kameron that she’s bashing Brandi for adopting a baby and not telling her. What Kameron hears is “you’re bashing a baby” and it’s probably because her head of snakes were moving and covered her ears. Stephanie tries to rationally explain her comment but because Kameron is unreasonable, she just continues to yell at Stephanie. Stephanie finally calls it a day and heads to Brandi’s room where Brandi is crying in bed. Kameron won’t shut up about it and eventually says she’s so upset that she doesn’t even want Stephanie in the house.

OK, who else has had enough of Kameron being upset about this baby thing? Also, who else thinks LeeAnne may as well go home? Will Brandi and D’Andra make up (and eventually, make out)? Comment below!

3 Comments for RHOD Recap: The Badger of Beaver Creek