The OG of the OC speaks openly about being a 'friend of' on the show she started. 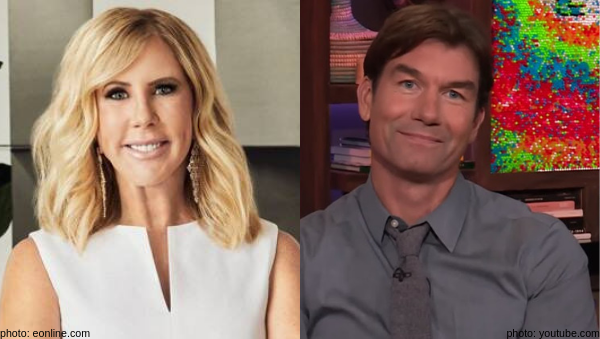 Real Housewives of Orange County‘s self proclaimed OG of the OC, Vicki Gunvalson, took a break from ‘whooping it up’ to open up about her demotion with actor/Bravoholic, Jerry O’Connell on his new show, Jerry O.

Vicki confided in the talk show host newbie that she asked Bravo‘s big boss, Andy Cohen, what she should say when asked about her losing her orange. Andy’s response? “He said, ‘You know what, nobody has ever lasted 14 years on a reality show, be happy and proud of that.’ And I’m still in,” Vicki told Jerry and her fans.

The soon-to-be Mrs. Steve Lodge spilled some wise words given to her from a RHOC producer. “Our producer, Scott Dunlop, said, ‘Unless they kick you off the horse, don’t voluntarily get off the horse.’ So, I’m still on the horse!” according to Yahoo.com. “I’m still riding the pony.”

“I don’t know what my future is, but I’m having fun and they’re my friends,” added the real grandmother of the OC. “I have a very much love for my franchise — a love for what I’ve created [and] a lot of love for my cast, we’ve been through hell and back. But truthfully, it’s our reality. It’s what my life has gone through for the last 14 years. And it’s been some bumpiness.”

‘Some bumpiness’ must be in reference to the time she lied about cancer. #NeverForget.

Do you think Vicki will earn her orange back? Drop your opinions off in the comments!

Be the first to leave Comments for RHOC: Vicki Gunvalson Talks About Demotion