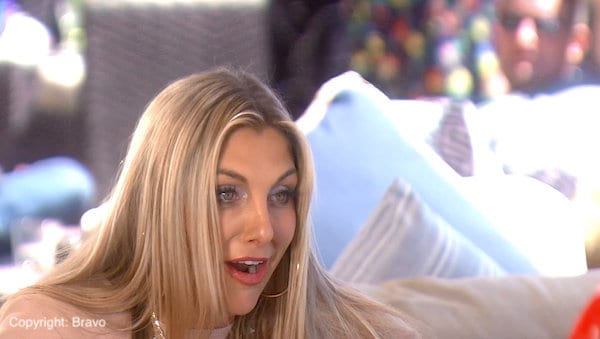 The ladies of RHOC are finally back from Jamaica. While they seemed to leave on good terms, the drama apparently followed them back to the OC.

Emily Simpson  snaps back to reality quickly. She hasn’t reached an agreement with her husband over heaving another kid yet, so they attend therapy. Emily opens up about the five miscarriages she suffered. I can’t even imagine going through that in person let alone discussing it on a reality show.   Thank god for Vicki Gunvalson for providing much needed comic relief after this scene.

Vicki and Shannon Beador both get some cosmetic upgrades. Vicki gets another facelift while Shannon gets some kind of eyelid botox or something? Eye don’t know. All I know is that Vicki should have a punch card at the cosmetic surgery center. Sixth injection free!  Although he made it clear he doesn’t approve, Steve accompanies Vicki to the appointment. After she wakes up, she tries talking dirty to him. There’s really nothing quite like a half mummy telling you she has no panties on.

Vicki’s doctor instructs her not to go home after her surgery which I don’t understand. Who needs an entire recovery suite to themselves? Why wouldn’t you want to be in the comfort of your own home? Does her doctor have a deal with the hotel where he gets a percentage for the patients he sends over? I have so many questions.

Meanwhile, Kelly Dodd  and  Gina Kirschenheiter  check on  Shannon’s recovery.  Gina seems a little too eager to stay friends with Shannon. So she does what I did to make friends in middle school: tell someone their friend is talking sh*t about them and hope they make you their new BFF (plot twist: it never works). Gina tells Shannon how everyone was talking about Shannon’s mental health in Jamaica, especially Tamra Judge.

Ladies and gentleman, we officially have a new pot stirrer in the OC! There’s no reason for Gina to tell Shannon what the women were saying about her. First of all, they were talking about her out of concern. Secondly, they didn’t really say anything they didn’t say to her face. It’s not like Shannon and Gina have been loyal friends forever; it isn’t Gina’s place to say anything.

While Shannon and Vicki recover, the rest of the ladies meet for drinks. The conversation quickly turns to what Gina told Shannon about Tamra being a bad friend. If I were Tamra, I’d be annoyed at Gina too. Gina had to have known that the only thing telling Shannon would accomplish is creating more drama. I liked this new girl at first, but similar to my feelings about Kanye, my opinion of Gina is quickly changing. I just hope that Tamra and Shannon don’t have another falling out because of this.

Do you agree that Gina was stirring the pot? Comment below!

Be the first to leave Comments for RHOC Recap: Twin Tweaks