RHOC Recap: The Next Chapter 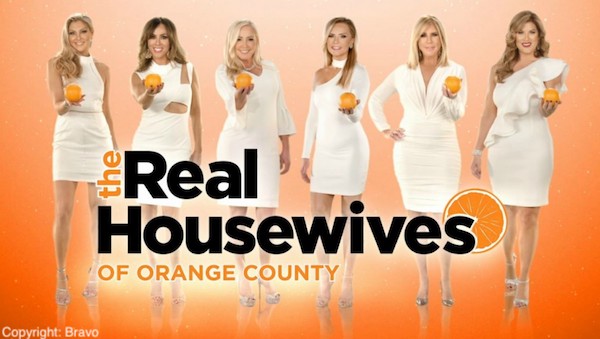 Last night the Real Housewives of Orange County returned for their 13th season, and while there was some routine catching up to do, the premiere was filled with drama juicier than fresh squeezed orange juice. There are some new additions to the group this season, but we’re only introduced to one of the two new ladies this episode.

The premiere was an emotional one from the very start. Tamra Judge’s husband, Eddie,  has heart complications and needs a potentially life threatening surgery. The couple bought a new house and move in before it’s fully furnished due to Eddie’s surgery. Considering they don’t have a functioning kitchen, I sure hope Vicki Gunvalson brings over plenty of casseroles. When Eddie’s surgery day finally arrives, the doctors discover another part of his heart where there’s an issue. It’s clearly an emotional time for Eddie and Tamra, and Vicki makes sure to check up on Tamra.

In other relationship news, Vicki’s boyfriend, Steve, has “informally” moved in with her. Vicki is thirsty for a proposal and wants her love tank filled permanently. Apparently, this can’t happen until Steve changes his permanent address. Her ex lied about having cancer, so is Steve not changing his address really such a big deal compared to that?

Aside from Steve, Vicki seems to be slowly working on her relationship with both Tamra and Shannon Beador. Shannon, now officially divorced from David, is in a new, smaller house raising her three teenage daughters. Shannon reveals her girls know about David’s affair, and she’s worried about coparenting with him. She discusses her broken relationship while her daughter tells her about her broken phone screen, the second one she broke in two weeks. I once lost my phone outside in a pile of leaves for two weeks, and my parents didn’t buy me a new one. Oh, to be a child of a real housewife.

Meanwhile, Kelly Dodd’s post-divorce life is a bit different from Shannon’s. Another bald white dude bites the dust, and I couldn’t be happier. Kelly says how easy dating is. Bask in your newfound sexual freedom, girl; you deserve it.

Later, Shannon sits down with Vicki and reveals how upset she is that David got a new girlfriend so quickly. Look, I feel bad for Shannon and all, but it’s time these women realize that old white guys with generic names don’t tend to make the best husbands. Shannon says is hopeful for the new year and everything her newly single life will bring. But she still hasn’t taken off her wedding ring…  She says it will make the end of the marriage finally feel final. Uh yeah, because it is! Shannon and Tamra get together, and Tamra encourages her to move on. According to Tamra, David was communicating with his new girlfriend via social media while he was still married, as if one affair wasn’t hurtful enough. Tamra convinces Shannon to finally take off her wedding ring, and in a dramatic, cleansing moment, Shannon slips it off and throws it into the ocean. Ha, as if anything would be that easy for Shannon. Of course, when she finally wants to take it off, the ring won’t budge. After some help from Tamra and everything including the kitchen sink, she finally manages to remove the ring, along with the rest of her dignity. I need a friend like Tamra. Honestly, if you don’t stalk your friend’s ex’s new girl on Instagram and forcibly remove her wedding ring, can you really even call yourself a good friend?

After checking in with the returning ladies from last season, we briefly meet one of the new housewives, Emily Moore Simpson. I was really hoping I’d be the first housewife named Emily, so for that reason alone I already dislike this mom/attorney/party planner. Apparently, Emily and Tamra used to be close, but they had a falling out over Emily hanging out with Ricky, the man who called Eddie gay. Now that the two women are on the show together, they seem to have magically worked things out and decide to leave the past alone. Aside from the fact that her husband proposed to her over Google Chat, we don’t learn much about Emily. 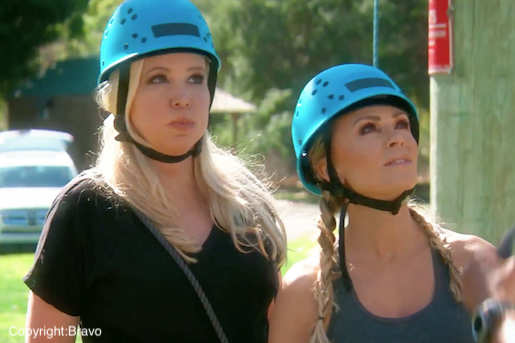 Towards the end of the episode, the ladies (minus the two new housewives) follow in RHOP’s shaky footsteps and attempt to strengthen their bond during a ropes course. Vicki, true to her character, falls before she’s even on the course. None of the women seem particularly thrilled at Kelly’s idea of bonding, but Shannon appears the most nervous. I appreciate how supportive and reassuring Kelly is since Shannon does need a confidence boost. However, as someone who grew up with a mom as an English teacher, I couldn’t help but cringe every time Kelly yelled “you’re doing good, Shannon.” It’s “well”, not “good.”  You’re not doing well, Kelly.

The women make this rope course in the middle of Orange County seem like a risky military mission in the jungles of ‘Nam. Vicki’s finger gets caught because of Shannon pulling on the rope, and predictably they both overreact. Shannon seems to legitimately fear for her life as she gets ready to zip-line to the end of the course. All of the women come out of the course alive and more bonded than ever, but I have a feeling these newly mended friendships won’t last long.

Do you think Vicki will have another falling out with the women this season? Let us know below!