RHOC Recap: The Day After 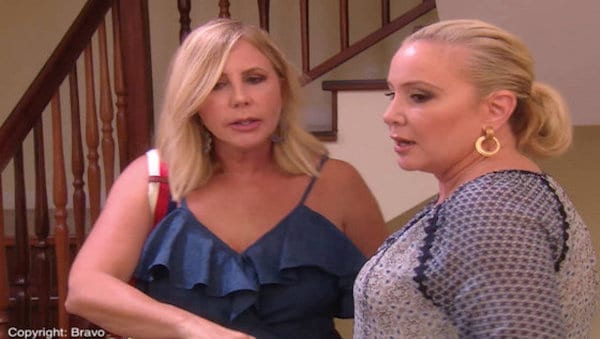 On this week’s episode of Real Housewives of Orange County,  the ladies chase waterfalls and leave the river of tears and talk of Shannon Beador behind. Tamra Judge watches from the sidelines as the women attempt to climb the rocky waterfall while keeping their boobs in their suits. This time it’s Kelly Dodd’s boobs that fall out (although I’m sure Tamra’s would have had more screen time if she’d been able to participate). It looks like it would be a gorgeous, calm place if there weren’t five screaming women there.

After whooping it up at the waterfalls, the ladies head get back to the villa. It’s been hours since anyone has heard from Shannon, and I’m not sure why they bother to keep texting her.  Ignoring calls and texts from friends who miraculously still care about you despite your ridiculous behavior isn’t cool. In the words of the countess LuAnn, she needs to stop being all like, uncool.

Vicki Gunvalson eventually reaches Shannon who agrees to come to the beach dinner later that night. Shannon asks Vicki to pick her up from her villa like Shannon is her prom date who needs constant reassurance about how good she looks and how much she’s loved.  As soon as Vicki arrived, Shannon should have immediately showered her in gifts and dropped to the ground to kiss her feet (or at least offer a simple apology). Instead, she defended her own behavior using the tired of excuse of her rough divorce. You’re in Jamaica for god’s sake; smoke a joint and loosen up girl.

Shannon sits down at dinner and offers a meek unapologetic apology to Kelly for not answering her phone. She eventually addresses her awful behavior to the entire group. She basically tells Gina Kirschenheiter’s that she’s jealous of Gina’s seemingly easy divorce. I’m jealous of people who can afford 3 ply toilet paper, but you don’t see me screaming at them in every grocery store.

Shannon doesn’t even apologize to her supposed best friend Tamra until the next morning, but only after first offering the classic “I’m sorry you feel that way.”

Again, she should have immediately apologized. Tamra makes it very clear that she won’t put up with Shannon’s behavior anymore, but they eventually hug it out. I really just wanted Tamra to start playing One Republic at this point because it should absolutely be too late to apologize.

While Tamra and Shannon talk, Emily Simpson tells the others how Shannon’s behavior reminds her of her mother who suffered from depression. She gets understandably emotional when talking about her strained relationship with her mom. When Gina’s mom calls Gina later, Emily is reminded once again about what she doesn’t have. I can’t imagine not having a mom who is my best friend and someone I can drink with and talk to about everything, from my sex dreams about Andy Cohen to my general feelings of worthlessness in this cruel world.

Speaking of drinks, the women enjoy a beach day where they stand in the ocean drinking out of coconuts.  I definitely wasn’t jealous even though I was watching while sitting on my couch in Pittsburgh’s suburbs huddled under a blanket drinking $5 wine.

Later, Tamra says her fight with Shannon is the best thing that happened during the trip. Hopefully it was worth it, and Shannon stops taking her friendship for granted. Tamra apologizes for saying “fu*k you” to Shannon. Gina chimes in and offers the best advice I’ve heard all trip and possibly all season: “Sometimes, you just gotta say fu*k you.”

Do you think Shannon’s apologies were sincere? Comment below!

Be the first to leave Comments for RHOC Recap: The Day After