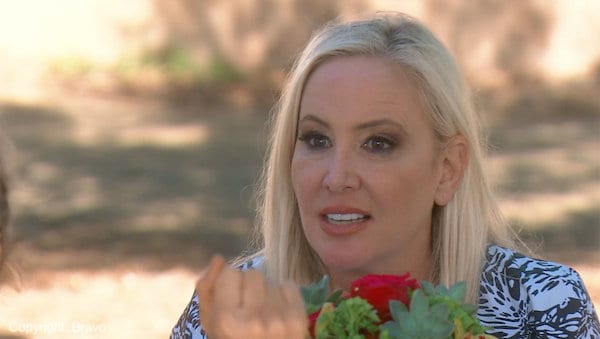 Shannon Beador has been accused in the past of making everything about her. While I don’t entirely agree with that, this week’s episode of RHOC certainly seemed to revolve around Shannon.

The episode starts with Shannon working out and ends with her walking out. She exercises with her personal trainer who she apparently thinks doubles as her therapist. She tells him why she’s not ready to date, a topic that is only slightly related to their workout.

Meanwhile, Tamra Judge and Eddie meet with Emily Simpson and her Mormon mole boy of a husband for dinner. Inevitably, the topic of Shane throwing Gina Kirschenheiter out of his house is brought up. He claims, “I didn’t kick her out, I welcomed her to stop being loud and to exit.” Okay, “welcomed her”? That’s literally the exact same thing as kicking her out. Come on dude, that just makes you sound like even more a d**k. His wife lovingly calls him “sarcastic”, to which he responds it’s not all sarcasm since there’s some truth in it.  I’m all for sarcasm, but you have to be genuine sometimes, especially when meeting new people.

With Kelly Dodd’s similarly irksome ex-husband off the show, she focuses on finding a new house and her daughter. Or rather, her daughter focuses on her, since apparently, Kelly doesn’t even know how to bake cookies from a box… Despite her poor (nonexistent?) baking skills, Kelly decides to take her daughter to volunteer at a soup kitchen. There’s really nothing like teaching your daughter about “giving back” while looking at million dollar homes. Call up Alanis Morissette, because this needs to be added to her song. However, I do give Kelly and her daughter major props for actually following through and volunteering at the soup kitchen. I don’t see any of the other women volunteering hands on like that.

And now onto the Shannon drama. Gina looks like a badass in all black errythang and meets up with Emily.  She tells Emily that Shannon compared Shane to David, insinuating that Emily’s marriage isn’t a good one.  Gina is upset, and it’s somewhat understandable but also not really. True, Shannon barely knows Shane, but what she does knows of him isn’t great. Take it from a girl who has cried on multiple first dates that had no subsequent dates, first impressions matter. Also, Shannon specifically said maybe she was just putting too much of her own marriage into the situation.

Tamra also discusses Shannon and tells her own mother how she is upset that Shannon hasn’t asked how Eddie is doing. Tamra reveals that Shannon isn’t the sharpest tool in the shed, or the wettest hose in the yard for that matter. David apparently took the utilities out of his name, and Shannon is shocked to learn that water is something that costs money… What a life to live.

Vicki Gunvalson celebrates her birthday in this episode by golfing with all the women. I guess she’s just embracing boring middle-aged stereotypes now? It’s just as much of a snoozefest as it sounds until Shannon starts driving the golf cart. My 8 year old cousin drives better than her. Tamra brings breathalyzers to avoid any drunk golf cart crashes. Although I may or may not routinely drive a golf cart through the woods with a glass of wine in one hand and a steering wheel in the other, I have never once come close to injuring even a caterpillar. Yet somehow Shannon manages to soberly almost lose a passenger and nearly wrecks the cart.

Later, Emily confronts Shannon about what she said about Shane. Like Shannon says, everyone commented on Shane’s behavior that night, not just her. Shannon may have taken it a little far by possibly comparing it to her own failed marriage, but Shannon admitted that and felt bad. Emily claims that Gina told her Shannon called their marriage “abusive,” which is entirely untrue. No one even mentioned the word “abuse” until Emily brought it up.

Emily takes a dig at Gina for having a husband who lives in another city, but ultimately they agree to just drop the topic. However, an easy resolution doesn’t seem possible for Shannon and Tamra since somehow Tamra takes this very personally and turns against Shannon. Shannon is upset that Tamra won’t admit that everyone was talking about Shane. I can just picture Shane at home laughing maniacally at all of the fights he caused and rubbing his hands together in glee.

I’m really liking the new Kelly this season; she tries to stand up for Shannon in a way that doesn’t add to the yelling. Vicki somehow thinks they should be talking about something that actually matters like life insurance rather than this bulls**t. Uh, okay Vic.

Shannon walks away as the dramatic “to be continued” flashes across the screen.

Do you think there will be a resolution between Shannon and Tamra next week? Leave your thoughts below!

Be the first to leave Comments for RHOC Recap: She Said/She Said