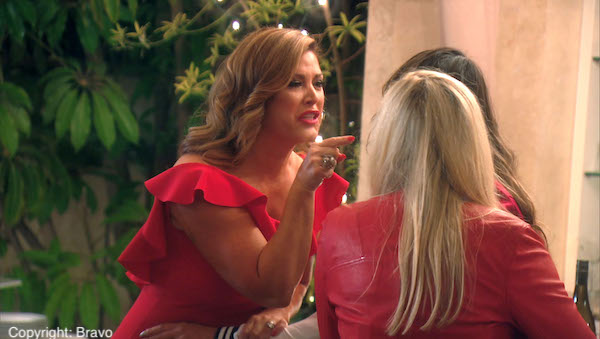 This week on RHOC we continued where we left off as the argument persists between Tamra Judge and Shannon Beador. Shannon characteristically storms off, and Tamra shows her no compassion in the moment. On one hand, Shannon acts like a selfish three year old throwing a tantrum because she didn’t get the happy meal toy she wanted. I agree that Shannon tends to make things about herself inadvertently. But on the other hand, she is going through some rough s**t with David and deserves sympathy. But on the foot (I ran out of hands), Tamra has gone through a messy divorce too AND her husband is currently suffering from major health issues.

Shannon eventually shuts herself in a bathroom like me when I’m drunk and my date didn’t compliment every single aspect of my personality and outfit within the first 20 minutes (side note: I’m single!!).

Kelly Dodd checks on Shannon while Vicki Gunvalson and tipsy Tamra meet up with Steve. I love Tamra sober, but after a few drinks? I love the girl even more. She comes right out and asks Steve when the wedding is. He gets up immediately without answering to get a drink. Rather than take this as a sign he doesn’t want to talk about possible proposals with her, Tamra asks if they “have good f***ing sessions.”

According to Tamra, if Vicki is blowing him, f***ing him and enjoying both, she needs to marry him. If that’s the only prerequisite for marriage, I’d have been married more times than Tamra says the word “f*&^” in this scene.

The next day, Shannon meets up with Kelly over boba to discuss the drama from Vicki’s birthday. Honestly, the only interesting part of this scene is Kelly’s reaction to boba tea. The disgusted look on her face is similar to mine whenever  Mormon mole boy comes on screen.

Meanwhile, Tamra invites with Gina Kirschenheiter over to talk about her issues with Shannon. It’s obvious that there’s a lot more below the surface than their petty fight the other day. Tamra is upset with Shannon for not asking how she and Eddie are holding up. Gina encourages Tamra to be real and tell Shannon how she actually feels.

Shannon and Tamra eventually meet up, and Tamra finally speaks her truth. She tells Shannon that she’s afraid to talk to her and feels Shannon isn’t being supportive. Shannon apologizes for not being there for her and seems genuinely sorry.

After they make up, Tamra reveals how much Eddie’s heart issues are taking a toll on both of them and how he’s quickly losing faith. Poor Eddie; it’s so easy to lose heart in situations like this (that’s a pun in poor taste, but I couldn’t resist).

Tamra plans a birthday party to help cheer up her husband. The women all officially meet Emily Simpson’s husband at the party. Shannon, now matching with Tamra in a boot, arrives in 5 inch stilettos on her other foot… WHY? Just, why? It’s hard enough to walk in a boot with flats let alone stilettos. She seems to just want the attention, so I’m not going to give her any more.

During the party, Gina confides in Emily that she’s having problems with Matt. No s**t. We all, unfortunately, know how that marriage ends. Gina is my favorite new housewife, and I hate to see this all playing out during her first season.

Gina isn’t the only one not having the best time. Kelly is uncomfortable at the party since Steve is there with Vicki. Not only is Steve friends with her ex, but evidently he talked trash about her to Page Six. Not cool Steve-o, not cool.

Before approaching him, Shannon tries to train Kelly to not be so confrontational. Kelly finally approaches Steve and handles the situation perfectly. She calmly asks if he talked to Page Six and why.  Rather than giving an honest, simple answer, he just walks away after telling her to take her drama elsewhere.

Uh, you’re the one starting this drama, Steve. Man up and grow up by telling her the truth. Shane is there for the whole incident and of course, can’t help but get involved even though it doesn’t concern him at all. Mormon mole boy defends Steve and accuses Kelly of being drunk. When she says it’s her first drink, he acts disgusted, claiming this is her “normal” behavior. News flash: being sober and mean to women isn’t what religion is all about bro.

Unfortunately, Kelly can only be calm for so long and calls Shane a dork and twerp among other things.

I LOVE Kelly for using the word “twerp”; only she could pull that off and not sound like an angry old man yelling at a kid in a movie from the 90s. She says this all to Emily, not realizing it’s her husband she’s talking about. Oops. Kelly is speaking for all of us really when she insults Shane. Emily responds by defending her Mormon mole boy and threatens to kill Kelly over her insults towards him. Listen, we all love our partners, but sometimes they can be a**holes. And threatening to kill someone over calling them out on being an a**hole is ridiculous.

Are you siding with Emily or Kelly on this one? Comment below!

Be the first to leave Comments for RHOC Recap: Seeing Red