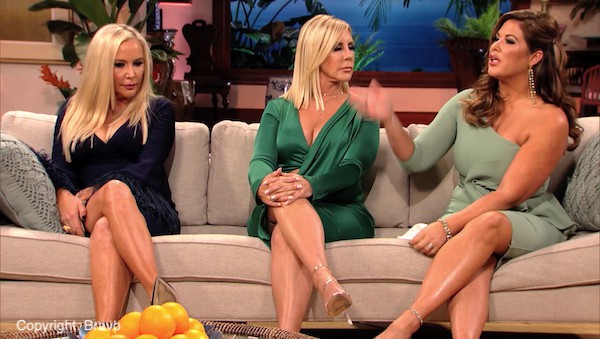 In the second part of the RHOC reunion, rumors die down but tempers amongst the women flair up.

Kelly Dodd tells Andy about her phone call with Michael at the end of the previous episode. He denied everything Vicki Gunvalson said, but Vicki only apologizes for repeating the cocaine rumor. Kelly somehow manages to calm down and apologizes for the name calling she’s done. How is Vicki allowed to get away with such character defaming accusations again and again? She might be the OG of the OC, but the girl needs to go.

Shannon Beador announces that her divorce still isn’t final, but David has moved in with his new girlfriend. Shannon doesn’t seem nearly as hurt by it as I would’ve expected. She says she’s going out a lot more now and is ultimately excited for the future. I’d be excited about a future of frozen dinners too if I were the one making money selling them rather than eating them alone with my cats every night.

The conversation (if you can even call it that) moves to the comparisons made between Emily Simpson’s husband and Shannon and Tamra Judge’s  ex-husbands. I’m not sure why Shannon is the only one getting yelled at for making assumptions about Emily’s husband when Tamra essentially made the same assumptions. No one ever actually said the word “abusive”, and it’s not a crime to acknowledge similarities you see between someone’s husband and your ex. Gina Kirschenheiter goes off on Shannon for her presumptuous opinion of Shane and the fact that Shannon reacts too quickly.  Andy asks Tamra if she thinks Shannon is less reactive this season after her two years in therapy. Tamra says “sure” and sounds about as convincing as me pretending to like sports.

The topic of Emily’s marriage to Mormon mole boy comes up. I still can’t get over how someone would marry a person without ever sleeping with them or even going on a single date. The other housewives all agree that they’d never marry someone without testing the waters. You have to at least sample the milk before buying the cow if you know what I’m saying. In the words of Kelly, you have to know if he’s working with a PhD or a small Vienna sausage.

Emily goes on to discuss the body shaming she had to deal with this season from viewers. Maybe after hearing how much body shaming hurt one of their cast members the ladies will think twice about penis proportion shaming, or PPS, if you will.

We learn that Shannon’s friendship with Tamra is back in a bad place. Neither Shannon nor Vicki attended Tamra’s birthday back in September. Vicki apparently didn’t go because Kelly was there (grow up), and Shannon claims she wasn’t invited. Shannon and Tamra admit to continually icing each other out in their friendship because of the other’s hurtful words and/or actions. A big reason Tamra and Shannon’s friendship took another turn for the worst was because of Shannon’s actions on a trip to New York with Tamra’s makeup artist. They previously made up, but make up caused their breakup, a tale as old as time. Apparently Shannon rudely insisted on Tamra’s makeup artists doing her makeup before the girl even had time to get herself ready.

The juiciest part of the reunion came towards the end when we learn that Shannon was dating someone while filming. Forget freshly squeezed orange juice, this is some steeping tea. Tamra is right: Shannon does love to play the victim. Shannon complained multiple times this season about David moving on so quickly. Meanwhile, she was doing the same thing. Just be honest girl!

Aside from Shannon’s confession, this reunion is now boring me. After the coke rumors died down, I wanted to tune out. Let’s just hope for an extra juicy conclusion next week.

Did part two of the recap live up to your expectations? Comment below!

Be the first to leave Comments for RHOC Recap: Reunion II