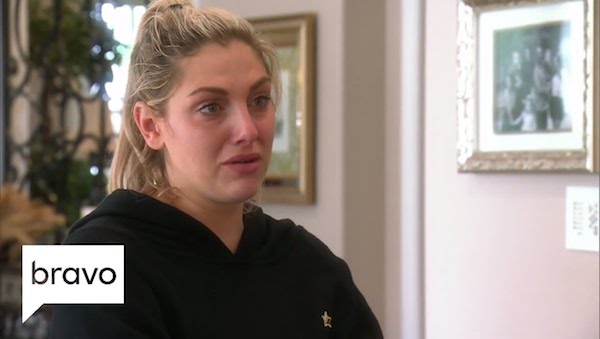 This week on “Why is Shannon Beador So Self Absorbed?”, *ahem* I mean The Real Housewives of Orange County, many of the women face difficulties in both their relationships and friendships.

Emily Simpson and Gina Kirschenheiter discuss how they don’t feel Shannon has gotten to know them well. Apparently they’re upset because Shannon didn’t respond when they texted her wishing her good luck on QVC. I mean, she was a little busy on live television. Also, not everyone has to be friends! To her, the new housewives are basically inexperienced coworkers. You don’t have to force friendships just because you work together.

Shannon throws a party celebrating her QVC success and invites all the women over to her new house. Almost immediately after arriving, Gina gets upset that Shannon doesn’t seem to be interested in her. Um, the party is actually about Shannon this time, but okay. Besides, all Gina did was make the most basic small talk with her. Off topic, but Tamra Judge is my new style twin apparently because I wore basically the same outfit she has on in this scene last week. Granted, I don’t think her pants were $13.99 from Target but still.

Anyway, the women brainstorm destinations for their upcoming trip and decide on Jamaica, man. All the talk of trips reminds Gina about her past vacations with her now ex-husband. She’s afraid she won’t see her husband’s family again and begins to cry. I’m sorry, but aren’t you supposed to hate your in-laws? I’m certainly glad I never have to see my ex’s boring family again.  I’d be happy if I didn’t have to see half of my own extended family again.

Gina talks about the difficulties of her divorce, and Kelly Dodd and Vicki Gunvalson again project their past divorces on her. They try to convince her to work through it and break up with the idea of a break up.

While the women attempt to comfort Gina on the couch, Tamra and Shannon finish cooking. Gina believes that Shannon doesn’t care about her because Shannon didn’t say anything while Gina was crying in the other room. Girl. She was busy cooking a homemade meal for you, and no offense but I wouldn’t come over to comfort a crying chick I barely know when she’s already surrounded by friends either. Sure, Shannon is definitely a bit self absorbed, but she doesn’t mean to be. I honestly don’t think she even realizes how she’s making Gina feel.  Instead of getting so upset about it, maybe Gina should just tell her how she feels.

In lieu of that, Gina tells just about everyone except Shannon how she’s feeling. Gina talks to Kelly the next day who assures her Shannon will let her in when she’s ready. Since when did Kelly become the voice of reason?

Kelly really is Mother Teresa this season. She continues volunteering with her daughter at the soup kitchen and serving food to those in need.  Understandably, her daughter gets upset that we live in a capitalist society and our government continually fails the lower class, people of color, and basically anyone who isn’t born a wealthy, white male because of systematic racism among many other things which leads to a cycle of poverty that is nearly impossible to escape.  Those may not have been her daughter’s exact words, but I could tell that’s what she meant. Kelly comforts her crying daughter and pats her hair which is sweet and all, but she’s working at a soup kitchen wearing gloves. It’s not exactly the most sanitary move.

Emily struggles with her own daughter drama.  She goes to dinner with her husband and discusses her desire for another baby girl. Mormon mole boy promptly shuts that down once again and says, “I want to be six feet tall, doesn’t mean it can happen.” That comparison doesn’t even make sense because she can have another girl since she still has plenty of embryos, but homeboy will never grow taller. Every time Shane comes on the screen I feel the need to text every boy I’ve ever dated and thank them for not being him.

He doesn’t even accompany Emily to the fertility doctor; his parents go with her instead. The doctor recommends therapy for Shane and Emily so they can get on the same page. Duh. I could’ve told her she needed to go to therapy with Shane episodes ago and saved her the co-pay.

Meanwhile, Vicki and Steve have a weird triple date with Michael, his girlfriend, Steve’s daughter and her boyfriend. I commend any girl who dates someone who has a mom like Vicki. Vicki tells Michael and his girlfriend that they should be pregnant by the time she is 32. Michael’s girlfriend responds by saying she just wants more dogs because really, what else can you say to that?

What did you think of this week’s episode? Is Shannon being too self absorbed? Comment below!

Be the first to leave Comments for RHOC Recap: Nice to Meet You…Again