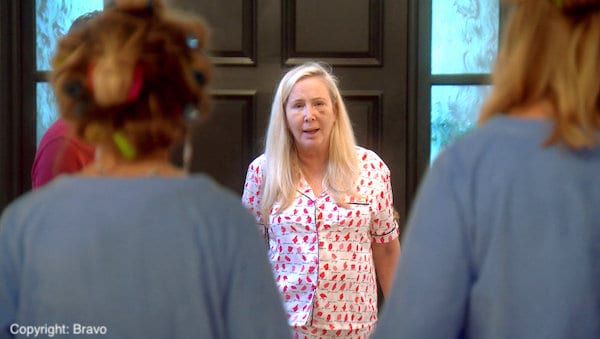 Before I begin, let’s all just take a moment to appreciate the title of this week’s episode of  RHOC :”Friends and Enemas.” I admire whoever names these episodes oh so much. Aside from having a yard in a non-tropical climate filled with the tackiest flamingos (love me some good irony) and coming up with elaborate punishments for rapists that involve something along the lines of locking them up for life in a room where Rebecca Black’s “Friday” is played on repeat, my life goal is to meet the genius behind Bravo titles.

Anyway, the episode this week doesn’t start off very fun, fun, fun. Kelly Dodd helps Gina Kirschenheiter move into her new “casita” following her decision for divorce. Gina and her soon to be ex-husband co-parent in a way that is best for their kids. However, I’m still not sure why they’re getting divorced in the first place! I mean, they seem to get along. They’re also both hot and still clearly into each other. Kelly takes one look at Gina’s now ex-husband and offers to take Gina’s leftovers. I know Gina has no obligation to explain herself to anyone, but if she wants to secure a spot on the show I’d think she’d share some juicy details.

Later in the episode, Emily Simpson hosts the vaguest (and only) cup reading I’ve ever seen.  The cup reader takes one look at Tamra Judge’s tea mug and predicts she’ll get divorced? Or that Eddie might die?

I have no idea what she’s talking about, and I don’t think she does either. The reading is very unclear for everyone. The cup reader is certainly not skilled at the art of tessomancy, I’ll tell you that much (if you’re a Real Housewives fan who also gets that Harry Potter reference, please DM me for a best friend application).

Kelly opts out of the reading to attend her daughter’s theater performance. Kelly and her ex-husband get pretty cuddly in the audience. I can’t help but wonder: were they also a couple who still slept together after their separation? Kelly congratulates Julie (who played a man) after her performance. Kelly tells her, “If you want to transition, you’d look good as a boy.” That is the sort of backhanded compliment I can only hope to perfect.

Meanwhile, Vicki Gunvalson ‘s kids find out about her facelift and don’t approve of the unnecessary surgery. Vicki goes on and on about how hot her boyfriend, Steve, is and what a great nurse he makes. It’s so uncomfortable listening to someone talk about how hot their clearly unattractive significant other is. It’s like when someone you don’t know well has a very noticeable booger; you’re not going to explicitly say anything, but you really hope they notice soon because they’re kind of embarrassing themselves.

Vicki and Shannon Beador are still recovering from their surgeries and don’t attend Gina’s birthday party. Emily and Kelly are the only housewives who join Gina and her friends for the celebration. Tamra forgets to call Gina to tell her she can’t make it. It’s one thing to not go, but to never call and say you can’t make it? Not cool Tamra.

Gina and her friends are all decked out in sequin dresses and look like a bad prom party from the 80’s. They’re a stark comparison to Tamra, Vicki, and Shannon who dress up as old women and relax at Vicki’s house. Evidently, the “old lady” look was in response to the shade Gina and Emily threw at them in Jamaica about their age.

Tamra brings Vicki not one, but two casseroles to help her recover. She also brings an enema to help Vicki and Shannon poop, but she ends up using it herself.  They certainly fulfill all schoolboy fantasies of sleepovers: Xanax, wrinkles and enemas. Cheers to geriatrics!

Do you think Tamra should have gone to Gina’s birthday instead of visiting Vicki? Comment below?

Be the first to leave Comments for RHOC Recap: Friends and Enemas