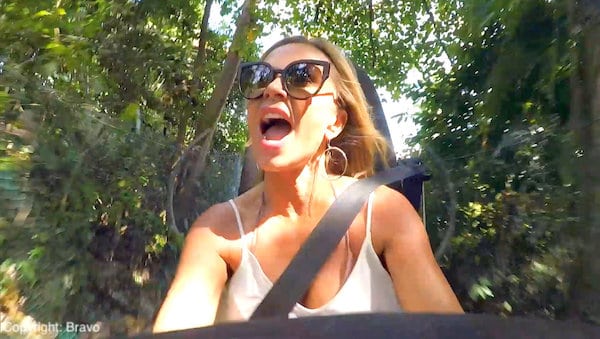 This week on RHOC we find the women where we left them: sweatin’ it up in Jamaica. The main focus of this episode is Shannon Beador’s blow up, but I can’t get over how they’re likely paying quite a bit of money to stay in a private villa and don’t have AC. If I were staying in a hot room in Jamaica I’d probably have a meltdown as intense as Shannon’s too. But more on that later.

The women get ready for dinner, but Shannon and Vicki Gunvalson take so long that the others leave without them. The two finally show up late to dinner after an unclear number of drinks. Shannon is having cosmetic surgery when she’s back, so she takes full advantage of her last night of drinking. Either she went a bit overboard on the drinks or was just being Shannon or both, but she quickly lost interest in the conversation when it wasn’t focused on her.

She gets annoyed that the ladies ask Kelly Dodd about her dating life and mutters, “This is a fun dinner…not.”  Shannon sounds like a 7 year old wannabe bully going up to someone on the playground and saying, “I like your shirt…not!”. Grow up girl. Up until this point I saw where Shannon was coming from, but there’s no excusing her behavior now.

When confronted about not making an effort to get to know Emily Simpson or Gina Kirschenheiter, Shannon’s excuse is that she isn’t good with change. Gina goes on to question Shannon’s friendship with Tamra Judge by saying that she didn’t text to check on Eddie.  Shannon gets defensive, and Gina asks Tamra if Shannon is a good friend to her. Some of the other women chime in and try to make Tamra a literal judge in the case of Shannon vs. Everyone. They shouldn’t put Tamra in a position like that because there’s no good answer there. After her friendship with Tamra is questioned, Shannon runs away to the bathroom quicker than me after eating a whole cheeseboard with no Lactaid pill. Or that time Tamra ran away from well, everyone.

They get back to the hotel after a car ride back more awkward than the time I farted in an interview a la Step Brothers style. Shannon is still heated and doesn’t want anyone to talk to her. She walks away from the group and threatens to take her mic off, and a camera man is seen in the background. When that fourth wall is broken, you know sh*t got real.

Shannon may act immature, but at least she has the sense to walk away and put herself in a time out in her room. At the hotel bar, Vicki, Kelly and Tamra decide to leave the drama behind and talk about something other than Shannon…not! They speculate about her mental health (always a great idea when the subject of the speculation isn’t in the room) and think she may have depression. The trio eventually goes to comfort Shannon, but Shannon finds their presence about as comforting as someone smoking at a gas station, absentmindedly flicking their lighter. She gets defensive and attacks them all, yelling that she is a kind friend. Nothing screams “kind friend” like yelling and swearing at your sympathetic friends at the top of your lungs.

I understand that Shannon feels attacked; no one wants to have three friends at once telling you that you might need to be on medication because you’re sad all the time. But at the same time, they’re genuinely coming from a good place and trying to comfort her! Kelly and Tamra say she constantly calls them upset at all hours of the night. Like Tamra says, they’ve all been through awful divorces and have a lot to deal with, it’s not just Shannon. Yet Shannon wants all the pity and attention to herself. I’m annoyed just typing Shannon’s name so many times in one article, so I can’t imagine how annoyed the other women must be with her. As my mom says, “jamaican me crazy man!”

The next day, the women try to contact Shannon. Vicki even offers to stay back with her, but Shannon ignores their texts and calls. They decide to leave her behind and shake their behinds instead. Fun Vicki comes out to play as she twerks in line for a ski lift to the top of a mountain. I’m 23 and can’t even twerk, so Vicki’s moves are impressive. Tamra speculates that she had a butt lift judging by the firmness of her cheeks, but of course Vicki admits nothing.

They finally reach their destination and go bobsledding (which just looks like a rollercoaster in the jungle minus all the screaming kids on the verge of throwing up their cotton candy). After last night, they definitely needed an experience that resulted in fun screaming.

Over lunch, they discuss Shannon again (shocking).  Even when she isn’t around the attention is on her, how much more does she want? Vicki tells the group that she saw Shannon pouring herself some vodka last night. Somehow this observation leads to an assumption that she drinks herself to sleep each night which seems kind of baseless. I’d pour myself a glass and drink alone after a fight with my friends too. Hell, I pour myself a glass when my cat refuses to cuddle me at night, but that doesn’t mean I have a problem and need alcohol to sleep. I needed a glass of wine just to calm me down after this episode.

Do you think Shannon is in the wrong? Comment below!

Be the first to leave Comments for RHOC Recap: Blow Up