RHOBH Recap: Thank You, Thuck You 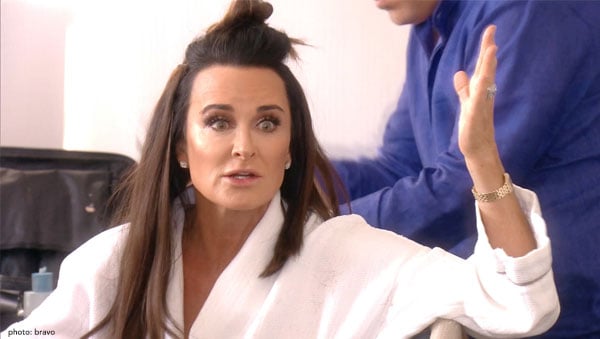 We are back with The Real Housewives of Beverly Hills at New York Fashion Week. What drama will unfold this week…

Surprisingly,  the scene opens with a “friend of the housewives”, Camille Grammer.  Camille’s daughter, Mason, is walking in Project Runway Alum, Milan Breton’s fashion show. The girls are up and out for fashion week and everyone is silent in the car which is definitely a first. Dorit Kemsley sits herself between Erika Jayne and Lisa Rinna because, at this point, it’s her only safe bet. Who would have ever thought Lisa Rinna would be a safe bet?! The show begins as Camille’s daughter walks, sporting a very similar face to Ramona Singer’s iconic runway walk. The girls return to the bus and once again, DEAD silence.

Kyle Richard‘s is prepping for her big fashion party at her boutique Kyle by Alene Too.  As per usual, Erika Glam Jayne is getting ready for the night with her glam squad. Lipsa finally comes into Kyle‘s room to see WTF is going on?! Lipsa missed the drama and needed to be filled in and calls out that 3-somes never work. Dorito is going for a full-on vampire look which is not so cute. Fast forward to Snoozefest Teddi Melancamp talking about how she worked out at Soulcycle at 6am and blah, blah, blah, blah, blah… I fell asleep. Why is she here?

Dorito meets with Lisa Vanderpump in her room and LVP calls her out for repeating she said that her parents didn’t give her enough attention. A quick rewind shows that LVP did in fact say something very similar on film… no hiding from that. Dorito, quick to turn it on Kyle as usual, says that Kyle said it too! With a roll of the eyes, LVP says just cus you BOTH said it, doesn’t make it any better. Wake up Dorito! LVP says she loves Dorito, mainly on the strength of loving her husband… Ouch Low MF blow LVP! She then adjusts it to say she became friends with Dorito because of her husband but has grown to love her. There we go, a little less salt on that injury! They seem to make nice and move on, but clearly it’s not over just yet.

We finally get to Kyle‘s party where caftan designer Shahida and Kyle‘s fab-u-lous (over-the-top) nephew and faux fur designer, Project Runway Juniors Matt Sarafa, are showing off their new lines. WATCH OUT b*tches, Bethenny Frankel has arrived! After the girls show up extremely late, Bethenny immediately calls out LVP for attacking Kyle. I’m sorry Kyle, was this you calling in backup?! Kyle says the whole situation was a big “Thuck You“. Bethenny does have a shining moment when she makes a wonderful dig at that she “didn’t even know” Dorito wasn’t English… Girl knows full well what she’s doing, #CALCULATED. Kyle still thinks that she is owed an apology but for the time being, moves on. We all know LVP is not known for her apologies so this clearly isn’t over.

Erika and Bethenny come face-to-face and, if you remember their first meeting, didn’t go so well. It seems times have changed and she says Bethenny‘s heart is a… heart of gold? I’m not sure I agree. But lets move on because… it wasn’t about Tom.

Kyle is finally standing up for herself and tells Lipsa that she is not going to be stepped on. Lipsa is LIVING for this because this means she may have another person at her defense, especially after losing Eileen Davidson. LVP purchases a red faux fur coat in support of Kyle‘s nephew, one that Dorito jokes should have been hers since red is her color and pink is LVP‘s. Kyle and Dorito decide they want to move past things and move forward. Dorito says she agrees but in her interview throws shade at Kyle for trying to rip LVP and her apart (the girl fight continues…).

We are finally back in Bev. Hills and Teddi comes to visit LVP at her gorgeous house in the clouds. LVP brings up her birthday party (prepping the next episode) and invites Teddi and her husband. I am always so excited to see what over the top PINK party she will throw that I will wish were my own… one day. They get into talking about the little big sitch and LVP explains that she didn’t want Dorito going home alone that night upset so she offered to go with her. Teddi is trying to be the grandmother reason this season and tells LVP just to straight up say “I’m sorry” to Kyle. LVP is pretty open to hearing this and agrees that she should say sorry, if Kyle went to bat for her. LVP calls out that she needs botox cus she can actually make expression on her face. HILARIOUS and me too girl, me too!

Lipsa is sitting with her family talking about how Delilah is homesick living in the Big Apple trying to become the next Gigi Hadid. If ya wanna be on top girl, you gotta suck it up… We catch a glimpse of Lipsa’s thong which was #awkward!

The tense music starts playing as LVP meets Kyle at Villa Blanca to have talk about the never ending saga of the 3some.  Kyle says she is overwhelmed about this never-ending construction at her house on top of everything else going on. LVP says there’s a lot at stake with Dorito because of her friendship with her husband and Kyle asks her if she thinks their friendship is at stake… LVP says she thinks it is. Kyle says that Dorito gets away with a lot more than she ever would and that isn’t fair. LVP says there’s a lot more history to their friendship than Dorito‘s so she holds her more accountable and apologies for neglecting Kyle. A clink of the rosé glass and the fight is over! (really made me want a glass of rosé, waiter!)

Next week, the never-ending 3some continues with LVP and Dorito as we take on LVP‘s birthday…

Who do you think was in the wrong; Dorit, LVP, Kyle, or ALL of them? Tell us below!

Be the first to leave Comments for RHOBH Recap: Thank You, Thuck You