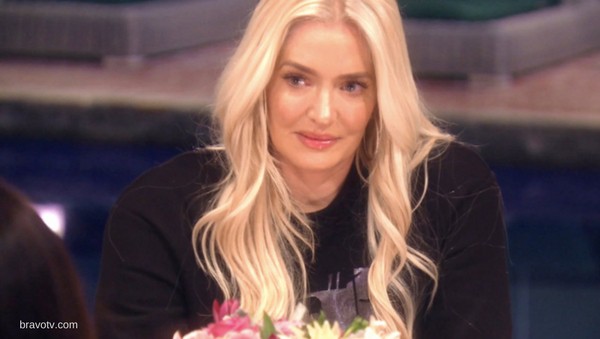 Tonight’s episode is all about death, motherhood, and getting everyone back together after the messiness of the past. The episode starts with a montage of Dorit Kemsley playing with her kids, Teddi Mellencamp and her daughter getting facials at Face Haus, and Lisa Rinna and Delilah Hamlin playing with their new puppy.

Then we join Dorit at her house, where the saga of Teddi vs. Dorit continues. First Teddi reaches out to Dorit to apologize for blabbing to Lisa Rinna about Dorit and PK trashing her at dinner. Instead of accepting Teddi’s apology, Dorit makes it clear that Teddi is trashing her reputation and that she feels like it is intentional…which it is because they are on reality television. BUT ANYWAY, Dorit asks Teddi why she didn’t just apologize to her in person when the group meets up the next day and Teddi says that she doesn’t want to be around Erika Girardi after their very heated blow-out last episode. Fair enough.

Then we go to Lisa Rinna’s house where she and Delilah are playing with their new puppy. Remember that Lisa had invited the other housewives to have lunch with her mother Lois and it seems like Lois is going to be quite the character.

Kyle Richards and Teddi meet up at Sweet Butter Kitchen for lunch, where Teddi fills Kyle in about all the drama with Erika. Teddi assures us she isn’t afraid of Erika, after Erika unleashed the beast on her at lunch, but then why. did. you. leave. the. restaurant. crying????

Lisa Vanderpump interrupts their conversation by calling Kyle on the phone and revealing some tragic news, Pink Dog has unfortunately gone to that big doggy park in the sky. Lisa VP is clearly distraught and it is all very, very sad.

Meanwhile, Lois has finally arrived at the Rinna home. Is Lois adorable? Yes. Is it hard to believe she’s Lisa Rinna’s mother? Yes.

The girls are all meeting up at Tart Restaurant for Lois’s official welcome luncheon. Camille Grammer is still on one about Dorit and her “strap on” comment. And as Dorit yammers on and on about her bathing suit line, Beverly Beach, Camille looks PAINED. Also, ALERT Dorit’s hair is magically long — proving that Erika must not be the only one with a hair and make-up team on staff. Speaking of Erika, she skipped lunch to go to her a work event (more on that later) and Lisa VP is so distraught over Pink Dog’s death that she decides that needs to be at home mourning with Ken. I don’t like seeing Ken cry and though Lisa and Ken are certifiable WEIRD DOG PEOPLE, their grief is hard to watch.

Kyle reveals that she is going to have a psychic séance at her house, because that’s the only way she’s going to be able to talk to her mother (YEESH, sad) and Lisa Rinna gives everyone one of her signature dusters from her clothing line (which I’m *sure* they all appreciated).

Over at  The Fonda Theater, Erika is getting prepped and ready to speak at “Girl Cult,” an event that is meant to excited to  empower young women. She tells the crowd at the event that you can rise above the drama, not get involved, and to stick up for yourself because she learned the hard way that no one is going rescue you. Do you hear that, Teddi? Erika was sticking up for herself when she released The Hulk on you.

Over at Kyle’s house, she is prepping for her séance. Is there any greater sign that this is a rich lady hobby than ordering catering when you’re trying to talk to the dead? I don’t think so.

WHAT. IS. GOING. ON. AT. LISA. VANDERPUMP’S. HOUSE? Now Pikachu is sick? Lisa Vanderpump lets it slip that Erika is the only one not to reach out after Pink Dog’s death, which is bad form, Erika Jayne.

Meanwhile, Erika and Lisa Rinna are in the car together on their way over to Kyle’s when Erika mentions that she wants to ask the group if they want to go with her to Berlin on a work trip. Rinna is psyched and we know the rest of the girls will be too because the trip is on the previews for the upcoming episodes. When Erika and Lisa Rinna enter Kyle’s house Erika doesn’t acknowledge Teddi, which means that things have certainly not cooled between the two.

Rebecca, Rebecca, Rebecca. She is no Allison Dubois, but she is the psychic that Kyle has invited to give the reading at her séance. Kyle has known the psychic Rebecca for 10 years. Rebecca has been receiving phones calls from heaven because heaven knows her phone number. She calls God, Papa God and she is sure that not only is there a heaven, but heaven is a place where everyone has their own Roku stick.

Lisa VP pulls Erika aside and tells her that she is upset that she didn’t receive a text about Pink Dog and Erika gives her a hug. Erika says she didn’t now about Pink Dog, which is why she didn’t text. Erika is a busy “Girl Cult” talkin’ woman, LVP! She doesn’t have the time to text!

Now the ladies sit down for dinner at the table where the following happens in a quick succession: 1) Teddi is talkin’ accountability again. 2) Erika extends an olive branch and compliments Teddi’s earrings 3) Rebecca the psychic drops the bomb that Marilyn Monroe is sitting at the end of the table — which figures that Marilyn would know how to get some screen time even from the great beyond and 4) Rebecca tells Lisa Rinna that her Dad is standing next to her.

Then the ladies move on to the actual reading where John Lennon shows up — naturally. (None of this is a good look for the clairvoyant community) Rebecca tells Dorit that she knew PK in a previous life and LVP that she knew she recently buried Pink Dog (…  because she saw it on Twitter.) Rebecca tells Erika that she has some psychic abilities and that in a past life, she was also a Spanish prince who was kidnapped. Of course she was.

The night ends with Erika inviting everyone to Berlin and apologizing to Teddi about losing her temper with her. The two decide to move forward for the good of the group.

Let us know if you believe that Teddi and Erika can move past their fight in the comments!

Be the first to leave Comments for RHOBH Recap: Heaven Knows