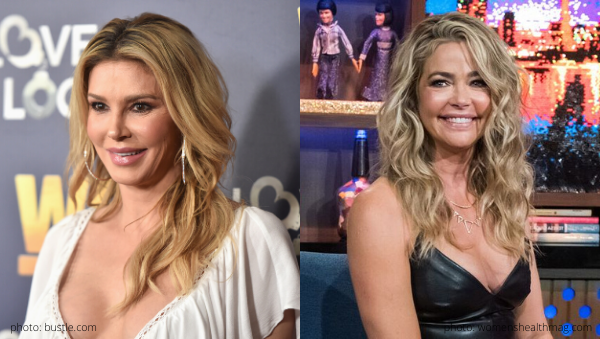 Real Housewives of Beverly Hills‘ Brandi Glanville goes hard on her frenemy, Denise Richards on Twitter. “I just got ‘Denised.'”

But what does it mean to get ‘Denised?’ Followers asked, “As in what Denise did to poor Heather Locklear, kind of Denised?” and “Or just stoned and lots of Tequilla Denised?”

Never forget, Denise had a fling with Bon Jovi guitarist, Richie Sambora, immediately after his split from Denise’s former BFF, Heather. The shade is real.

This cryptic tweet led to a series of others. Eleven minutes later….

Brandi got playful with her shade when she posted a gif of herself to Twitter.

In true Brandi form, she didn’t hold back on making damning accusations.

In case you missed it, there have been several rumors circulating regarding drama within the cast involving RHOBH star Denise and the ‘friend of,’ Brandi. Apparently, Denise skipped production on filming the finale earlier in December. Click here for more details!

It’s not certain that all of Brandi’s tweets were all directed at Denise, but it’s probable. If you follow Brandi on Twitter, you know this is all very typical behavior on her end. All we know for sure is that Brandi is not messing around, as she made some serious accusations from blackmail, to skeletons in the closet to slut shaming. Oy vey!

Do you think all of Brandi’s cryptic accusations were target at Denise Richards? Sound off in the comments!