THE LIES! THE LIES! The Internet Memes Phaedra After RHOA Reunion Revelations

Internet memes for the Win 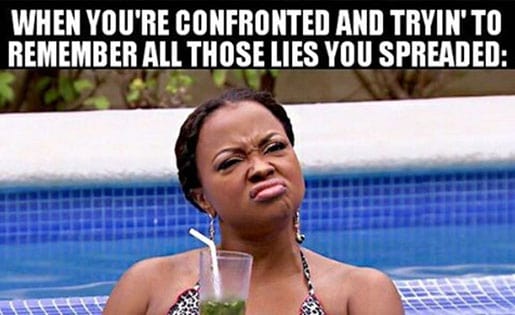 BRAVO TV managed to stretch the season 9 Real Housewives of Atlanta reunion debauchery into a month-long 4-part event! After the big reveal of Phaedra lying and spreading false rumors about Kandi, the fans didn’t disappoint coming for Phaedra. Frick & Frack and allegedly Phaedra’s career as a Housewife are over, but the RHOA Reunion memes will live on…

That ending in the 3rd episode of #RHOAReunion when you love you some #phaedraparks but you see how messy she is that even the lort shrugged pic.twitter.com/7iPgmUU448

When Porsha said talk to Phaedra . She said it !!! #RHOAREUNION #RHOA pic.twitter.com/OSc7I7MbLE

I'm glad to see that Phaedra landed on her feet. With her ex-husband being in jail, them RHOA checks drying up, and her dignity somewhere in Mechanicsville, VH1 looked out for her…😂😂😂😂 . #deshawnthecomedian #phaedraparks #realhousewivesofatlanta #rhoa #rhoareunion #kandiburress #vh1 @kandi

From the Memoir of Bobby Brown. 😂 #phaedraparks #bobbybrown #rhoa #lawyer

😳👀Craziness!!!! I don't watch the show anymore however I am aware that true friendship is not based on lies and alibis~ ————————————— What are your thoughts on what happened at the reunion??? #rhoareunion #friends #betrayal #lies #gossip #rhoa #drama #butwhytho

A post shared by Author Sabrina Childress (@authorsabrinachildress) on May 7, 2017 at 5:26pm PDT

Be the first to leave Comments for THE LIES! THE LIES! The Internet Memes Phaedra After RHOA Reunion Revelations