RHOA Recap: The Peaches of Tokyo 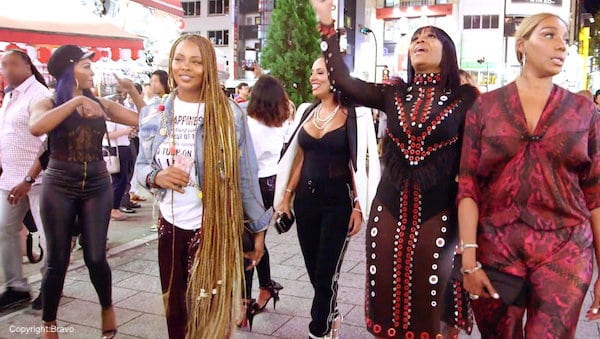 There’s really nothing like taking a bunch of feuding women and plopping them in the middle of a foreign country. In this week’s episode of RHOA , the women trade in Atlanta’s grits and greens for sushi and sake in Tokyo.

Before departing, Kandi Burruss  shoots a commercial for her upcoming dungeon variety show. Something tells me that this show will outshine even LuAnn’s cabaret show. I mean, profiting off of a diss is amazing in and of itself, but adding leather corsets and whips? Yes please.

Eva Marcille stops by the shoot and discusses her issue with Porsha Williams. Eva asks Kandi for advice on how to handle her since clearly Kandi and Porsha have had their own issues. Kandi advises Eva in general that she needs to be upfront with this group of women since they can twist things that are said behind their backs.

Meanwhile, NeNe Leakes  visits the mom to be. Porsha seems to have already given up on her personal hygiene just a few weeks into her pregnancy. As someone who has been so depressed I wore the same peanut butter stained pjs and didn’t shower for half a week, I really shouldn’t  judge. But that mental gavel keeps banging. Porsha decides it’s time to tell the other women that she’s pregnant and plans to do it on the trip.

The ladies soon leave for Tokyo, and there’s a “problem” before they even get to their hotel: none of Marlo’s luggage made it to Japan. She should take that as a sign to go home and leave the show unless she’s going to check her attitude like she checked her lost bags.

The real drama starts once they all arrive at the hotel. Kandi is clearly hangry after 10+ hours in the sky and wants a meal that she knows. I can’t really blame her since the fish served for dinner looks like something I wouldn’t even feed my cat.

Eva explains that last time she was in Tokyo she got detained during a modeling gig because officials thought she was a prostitute. I honestly don’t know if I’d be flattered or insulted if someone made that assumption about me. Since Eva knows firsthand the cultural differences they’ll face during the trip, she announces that she hired a tour guide.

Eva then suggests that they go around and basically pull an airing of grievances like it’s Festivus. She wants everyone to get their issues out of the way before the trip officially begins. Eva begins by addressing Porsha about the comment she made at Tanya’s house. Porsha maintains that Eva threw shade at Cynthia Bailey‘s modeling career. Cynthia seems to have moved past it, so I’m not sure why the others can’t.

Porsha somehow decides that the perfect time to announce her pregnancy is in the middle of multiple arguments. She gets up from the table with Nene, and they return to make her announcement in the least dramatic way possible: with a loud gong and a foreign language. Porsha announces her pregnancy in Japanese, and all of the women are thrilled for her, including Kandi.

Unfortunately, after Porsha’s exciting news, Eva receives some devastating news. Eva gets a call from her mom informing her that her grandfather had a heart attack and is likely going to pass away. Eva is distraught, but after acknowledging there’s nothing she can do, she decides to join the women on the excursions she planned.

After making a big deal the night before about being punctual, Nene arrives at the tour bus a half hour after they were supposed to leave. Shamari DeVoe and Marlo then arrive an hour late. Marlo’s excuse is that is that none of the women offered to do her hair… girl you can do it yourself! She’s annoyed that they didn’t offer her any clothes or toiletries since she lost her bag. Marlo, you can’t be mad if you didn’t even ask them. I’m also pretty sure that if Holiday Inns offer free toiletries, then a five star hotel in Tokyo does too.

The women finally set off to visit an old temple and go for sushi. During lunch, they find out Tanya isn’t legally married but believes her man is her partner for life. Nene advises her to “tread lightly into the end,” a comment which understandably irks Tanya. They get into a big argument just before an ominous “TBC” flashes across the screen.

Do you think NeNe was wrong in offering Tanya unsolicited marriage advice? Leave a comment below!

Be the first to leave Comments for RHOA Recap: The Peaches of Tokyo