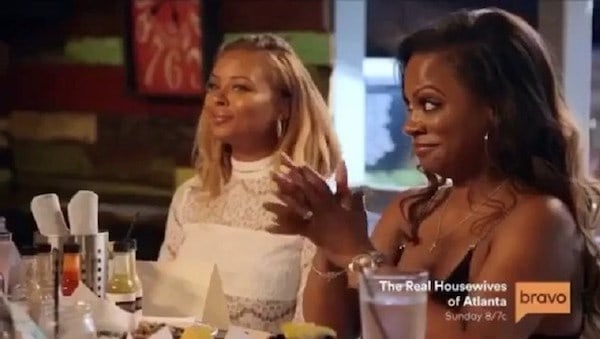 The name of this week’s RHOA episode sounds like an entire chapter of my life, with an extra dose of petty drama.

The screaming match between Kandi Burruss and Porsha Williams   over the incident at Todd’s party continues this episode. Cynthia Bailey tries to play mediator and get the women to see one another’s side, but neither Porsha nor Kandi are having it. Once the two separate from each other, eventually things settle down.

Before heading downstairs to the hibachi room (still not a sentence I’d ever think I’d type), Kandi unfollows Porsha on social media since Porsha already unfollowed her. It’s justified retaliation pettiness, and I completely support it. In fact, I’m a living testament to its effectiveness. The other week my dear, sweet aunt verbally harassed me via text and told me I couldn’t solve all my problems by unfollowing and blocking people on social media. Well I blocked her, and suddenly I have one less problem! *Cue Ariana Grande*

Kandi is completely justified in choosing to ignore Porsha. I honestly don’t even know how she ever spoke to Porsha again after the whole rape and sex dungeon accusations. But more on that later.

If you recall, the whole point of Tanya gathering the ladies at her house was to tell them about the surprise trip to Tokyo she planned with Eva Marcille .  Of course, no international housewives trip is complete without a little cultural appropriation (looking at you RHOC ladies in your “Jamaican dreads”…). Tanya bows during the announcement and proceeds to use a Japanese accent while handing the women kimonos in the hibachi room.

The scene quickly progressed from cringeworthy to eye roll worthy. Porsha says she hated that “… it had to go there upstairs.” Um, it didn’t have to go there Porsha! You’re the one who reacted poorly and caused the screaming match. If every housewife would just learn to own their sh*t, well the show would probably be canceled since there would be a lot less drama to watch. Still, Porsha needs to own up to her mistakes.

The women are forced back outside due to the fact that the room is so damn hot; hibachi was a bad choice. This only proves my point that Tanya definitely doesn’t even come close to getting her money’s worth for that room. Although Shamari DeVoe probably got more use out of it than Tanya’s family combined. She stays and continues eating alone while the women are outside. No drama and multiple chefs just for yourself? Yes please.

I have to pause for a moment here and address Eva’s confessional. What in the world is Eva’s makeup here?! She’s naturally gorgeous, but her eyeliner and mascara make her look like Alex from the Clockwork Orange. Maybe the makeup all melted in the hibachi room, and she hasn’t been the same since.

Later in the evening, Porsha starts even more unnecessary drama. She says Eva was shady when Eva called Cynthia the “mother of modeling.” First of all, that’s not even really an insult. Second, this is just textbook deflection. Porsha, sweetie, just stop.

This episode has family drama too, albeit a lot less than the Giudice/Gorga drama. Gregg is having a hard time with his cancer prevention and and takes it out on everyone, including NeNe Leakes.  During his birthday, NeNe admits to his sister how hard it is to take care of Gregg and how much of a toll it takes on her. She certainly could use a vacation, so for her sake I hope Tokyo isn’t too crazy.

In other couple news, Cynthia finally introduces Mike to all of the ladies. They each have three minutes to question him and make sure he’s good for her. After this scene, I think I need some new friends; mine barely even questioned a guy I dated why his mother still bought his clothes at 23.

Later, we learn that Kandi is making the best of the whole sex dungeon rumor by turning it into a burlesque show. All I want from life is Kandi’s ability to capitalize on just about everything.  She asks Shamari to play a role in it, and the two hit up a lingerie store for ideas. Shamari tries some on and calls to ask her husband if he will be okay with her wearing something that revealing in the show… Shamari, it’s literally YOUR body, YOUR choice, and it always will be. If anything, she shouldn’t allow him out in public until he gets some eyebrows.

Later, Porsha reveals in a therapy session that Dennis was still texting his ex even though he and Porsha both agreed not to talk to their exes.  Armed with a Hot Pickle in hand, Porsha confronts Dennis about his lying to her about texting his ex. Dennis doesn’t seem to think he did anything wrong but eventually offers a half hearted apology just to shut her up. Hot dog, this is a fun relationship to watch!

After seeing the rest of the argument unfold, are you team Kandi or Porsha? Comment below!

Be the first to leave Comments for RHOA Recap: Texts, Lies and Therapy