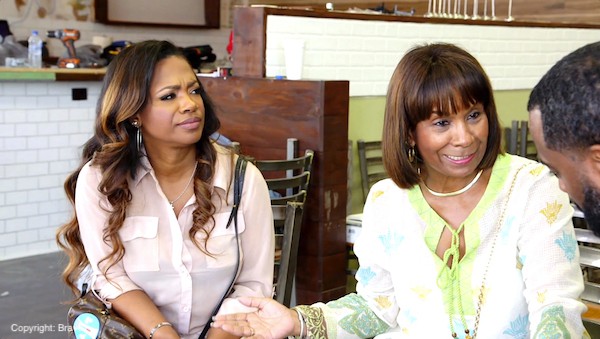 This week’s episode of RHOA certainly had some moments as sour as a lemon.  Before we get into it, I’d just like to point out that I’m so dedicated to writing reality tv recaps (and making it to New York by NYE) that I watched part of this on my phone in a bathroom of a rest stop to make sure I didn’t miss anything.

Now that I got that out of the way, let’s focus on the actual recap. Cynthia Bailey’s  daughter, Noelle, got into Howard University. They both have a hard time accepting the fact that she’s leaving. Cynthia invited people over to celebrate Noelle’s achievement, but Noelle has a breakdown about leaving for college.  She says she doesn’t want to go, and honestly I wouldn’t either if I lived at Lake Bailey.

Meanwhile, NeNe Leakes ‘s son who decided to not go to college is supposed to help NeNe at her store.  Working with your mom as your boss is bad enough, but with a diva like NeNe as your boss? I’d go to college just to get out of that.

Apparently mama drama never dies in this show. I thought we got past the whole Mama Joyce and Todd Tucker feud years ago but clearly not. Kandi Burruss’s mom apparently upset Todd with a comment she made earlier in the season to Porsha Williams. Mama Joyce said that Kandi took a lemon (Todd) and made lemonade.

Kandi’s mom’s excuse is that she meant it as a compliment. Yet Mama Joyce doesn’t even seem to believe herself when she says that. She digs herself an even bigger hole and says Todd wasn’t hot before he got with Kandi. Um, please explain to me how a person can magically turn hot just because they start dating someone? Mama Joyce eventually agrees to apologize to Todd.

Cue more emotional mom talk. Shamari DeVoe sits down with her mom who wasn’t around a lot when she was a kid because she had to work. Shamari assures her that she loves her and understands why she had to make that sacrifice. I can watch The Notebook ten times and not shed a tear. But mom and daughter bonding? I’ll cry an entire ocean over that wholesome sh*t. It was as beautiful as the wedding dresses that Eva Marcille  tries on later in the episode. For some reason, NeNe decides to surprise Eva and invites Marlo to the fitting. NeNe wants Eva to have a dress that’ bling and “titty city.” Someone give this woman a book deal so she can write her own dictionary.

Eva wants a dress that’s a bit more simple. As she shows the women one of the dress options, Marlo makes a” small request” which apparently is what fat shaming is called now. Marlo tells Eva that she needs”ten pounds off.” Can we get Marlo off this show already?! We already have to put up with James Kennedy’s body shaming, I cannot take her too.  NeNe tells her to shut up and points out that Marlo isn’t one to talk considering her booty is the size of the pimple I had on my forehead in my sixth grade school photo. Poor Eva; first her mom’s comments and now Marlo’s unsolicited “advice.” Please get Marlo off the show.

Later, soon to be new mom Porsha goes to the fertility doctor for a baby checkup with Hot Dog Dennis. She learns that she has to have a C section scheduled. Meanwhile, Dennis learns 9th grade sex ed! He asks if a gynecological tool is a condom…it’s a wonder he hasn’t knocked up multiple women by now.

Cynthia eventually drops her daughter off at college.  Cynthia’s main concerns are apparently that Noelle will leave the water running when she gets out of the shower and do her laundry wrong. If those were the only mistakes I made in college, let’s just say hospitals and tattoo parlors would’ve made a lot less money.

Mama Joyce and Todd finally sit down to talk about the whole lemon thing at OLG. Kandi’s mom maintains that the comment wasn’t an insult and compares herself to a lemon tree. I think even Mama Joyce herself got lost in this ridiculous metaphor.

How many mother daughter moments did you tear up about during this episode? Comment!

Be the first to leave Comments for RHOA Recap: A Mother’s Love