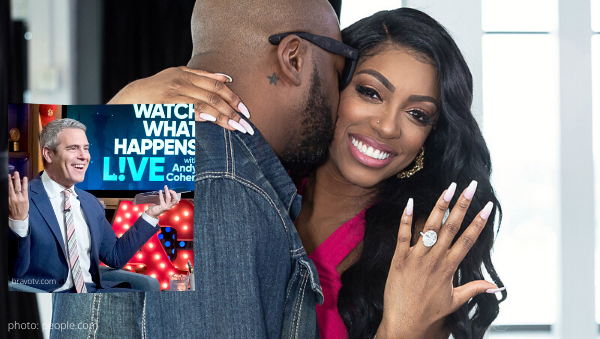 The couple split in June after reports of Dennis cheating on a pregnant Porsha surfaced. Porsha gave birth to the couple’s first child, daughter Pilar Jhena, in March. “We’re still working it out. We really are,” Porsha explained. “We’re working on our family. It takes time.” Porsha continued, “I love him, and he loves me, and we’re doing what’s best for our family. That’s really all you can do.”

Can we talk about the engagement ring?

Andy asked the new mom to respond to tweets asking if she was given the same engagement ring  she had to give back after Dennis’ cheating scandal. Porsha admitted, “It’s the same ring and that was shady, but yes.”

Though the couple doesn’t have a firm date yet, Porsha confirmed her wedding to Dennis “will be next year.”

Do you think Porsha is doing the best thing for PJ by marrying her father? Drop your opinion off in the comments!