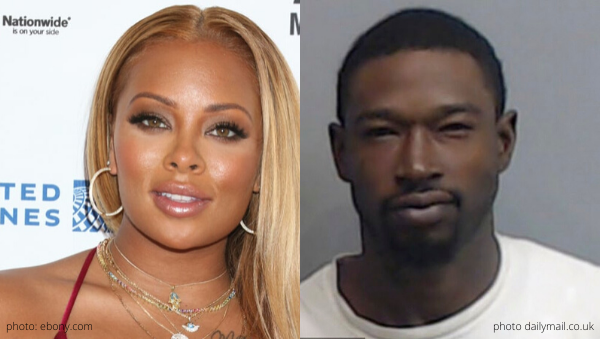 Here’s how it started. Kevin was in Georgia court fighting Eva for custody of their daughter, Marley Rae. Because Eva the diva has always had custody, she recently moved to dismiss his case against her. She believes Marley’s dad is dangerous and doesn’t want her little girl around him.

While in court, Eva pointed out that Kevin had been previously arrested for domestic violence. She didn’t stop there….she even accused him of not paying any child support for the daughter he wants custody of.

Here’s where it got messy. Kevin went live on Instagram as he walked around the courthouse. Naturally, a police officer approached him and told him to stop recording inside the court. His response? He told the officer to take off his badge and fight him before calling the officer a “bitch.”

Eva Marcille Meet You On The Block GIF from Evamarcille GIFs

It didn’t stop there! The hot head continued to make threatening remarks and refused to stop recording inside the courthouse. The Blast got their hands on court docs that state Kevin was arrested for “criminal damage to property, simple assault, obstruction of law enforcement officer, terroristic threats and disorderly conduct. He is currently being held on $9,500 bond.”

Eva has gone on the record in the past regarding her relationship with Marley’s dad- even accusing him of abusing her while she was pregnant with their daughter. “Domestic violence is very, very real. I went through domestic violence. I finally found the courage to come up and talk about it about a couple years ago about what I went through with Kevin. I feel bad for women that have to deal with it. And it’s actually not a laughable matter; it’s something that actually makes you feel so little so you don’t want to talk about it, but it really sucks.”

Eva went on to marry her current-husband, Michael Sterling, and recently had another beautiful baby with her new husband.

Did you tune into the season premiere of RHOA this week? Are you glad Eva returned as a peach holder? Sound off in the comments!