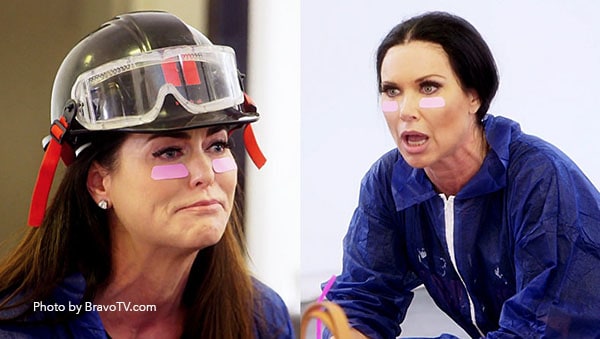 The first real grown up job I ever had was as a marketing director. I was in my early 20s and had no idea what I was doing. The one thing I did know was that I worked with a general manager who also didn’t know what he was doing. Unfortunately, the company I worked for had its fill of drama and to curb it, our know-nothing GM decided to take matters into his own hands. He made us all show up for an early morning meeting, write down our problems on a piece of paper, and then toss them in a burning barrel. It was the dumbest thing I’d been involved in up to that point, and I used to be a breakdancer. The whole point was to get everyone to agree that after their feelings were burned they no longer existed. It didn’t work then so when I saw how LeeAnne Locken was going to try and attempt the same thing with her smash stuff party, I knew how it was going to go.

Not that the women didn’t need to blow off some steam. God knows I would if I were Brandi Redmond. Currently, she’s in the process of finalizing her adoption of Bruin, which comes with meetings with social workers to ensure she’s a good mom, but I think they’re there to make sure that her daughters don’t try to give him away. You know what I’m talking about. Prior to the social workers’ arrival, Brandi’s daughters tell her they’re going to tell the social workers how bad of a mom she is and how she’s always on her phone. The goal: get their brother taken away. The first time the social workers paid Brandi a visit Brinkley told them Brandi’s favorite drink was wine. This time, when Brandi told them she reads three books a day to Bruin, Brooklyn replied with “I find that hard to believe.” Then, when Brandi told the social workers she takes Bruin for walks, her daughter said “they walk to the mailbox”, to which Brandi laughed and explained they weren’t always there to witness these alleged walks. So yeah, smash away, Brandi.

Kameron Westcott has reason to smash the crap out of things as well. She’s heading to the Global Pet Expo in an attempt to find a distributor for her business, Sparkle Dog. However, because this is a business trip she can’t take the jet so she has to fly commercial with the rest of us villagers. Oh the frustration.

While Kameron and Brandi deal with their own personal hell, D’Andra Simmons and LeeAnne meet for coffee and pie. LeeAnne tells D’Andra about Smashing Good Time and her plan to get the girls to really express their true feelings, which is a perfect segue into D’Andra’s issues with her mother and her business. D’Andra explains that if she separates her business from her mother’s she’ll have to leave with nothing. She has to give up shopping and may even have to clean her own house. Somebody start a GoFundMe, quick! Has nobody explained to her that that’s pretty much what happens when you leave your parents house and become a grown-up? I wasn’t the only getting annoyed at D’Andra’s #firstworldproblems. LeeAnne lays into her and tells D’Andra that she’s lazy and is used to living the princess lifestyle and doesn’t want to separate her business because she doesn’t want to give that up. True as it may be, D’Andra believes LeeAnne is being condescending and has no room to talk considering LeeAnne’s fiancé, Rich, pays all of her bills.

Now that LeeAnne has managed to put a cloud over D’Andra’s day it’s time for her to move on to Rich. LeeAnne is full steam ahead planning her wedding since Rich gave her the go-ahead. Except, based on his facial expressions during their meeting with the wedding planner, I don’t think he thought she would actually do it. Then when LeeAnne says she wants 500 to 1,000 people there his eyes grew about the size of the budget she wants to spend, prompting him to blurt out “I don’t like that many people.” But the best was when they settled on a date, kind of. LeeAnne decides it should be sometime in November, Rich looks like he’s trying to decide whether he should vomit right there or hold it in. He holds it in, at least until the camera quit rolling.

Meanwhile, D’Andra heads over to Cary Deuber’s house to continue talking about her business/mom troubles. A concern of D’Andra’s is that if she were to lose all of her money she would lose all of her friends, as was the case with a former friend of hers who lost all of her money. Cary doesn’t exactly help the situation when she tells D’Andra about a conversation she had with LeeAnne regarding D’Andra’s finances. Apparently, LeeAnne told Cary that D’Andra had a mere $200 in her bank account. In Dallas high society world this is unacceptable. D’Andra. Is. Pissed. And then, my favorite part of the entire show happened. During her testimonial she goes into a rant about having five bank accounts and shuffling money from one to the other and that’s why her shopping account was so low. I almost couldn’t hear her explanation because I was laughing so hard at Kevin Hart’s shuffling money comedic monologue playing in my head. Enjoy this meme and then enjoy this clip of it. 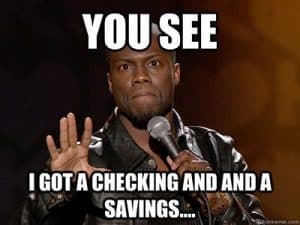 After I finished laughing, I heard D’Andra tell Cary that she was going to talk to LeeAnne about it at the smash party.

The women begin to arrive at the smash party, each to be taken back by LeeAnne’s appearance. She’s dressed as a man, or her idea of what not rich men look like, I guess. Brandi shares a ride with D’Andra and D’Andra shares her $200 bank account story with Brandi. Brandi is not surprised and brings up an incident last year that led Brandi to believe that LeeAnne uses people’s weaknesses against them. D’Andra is now even more mad.

Once all of the women arrive at the smash party, LeeAnne announces what the party is really about: they’re all going to get everything out in the open and quit pretending they like each other. Cary responds with “this isn’t going to be like the time we got tea”, to which she was referring a similar exercise that took place over tea and ended with everyone in a fight. LeeAnne continues – she believes their entire group is good at being fake and with that, D’Andra. Goes. Off. D’Andra starts yelling at LeeAnne, wanting to know why she’s telling people that she only has $200 in her bank account. LeeAnne was speechless for a second. Kameron doesn’t know why D’Andra would care because that $200 is probably just her Starbucks account. You keep this up and I just might start to like you, Kameron.

D’Andra continues to go off on LeeAnne, telling her she was humiliated by LeeAnne telling people about her financial troubles. Cary owns the fact that it was her who told D’Andra and now it’s looking like the only fake one is LeeAnne. Before I keep going on D’Andra being pissed about this $200 thing, let me give you her explanation. D’Andra is the primary money-maker in her household, however, that money is basically from her mom. She’s also stressed out about the fact that when she was shopping in Colorado, her purchases were put on the business credit card and now she’s worried that her mom is going to be pissed. My mom would be to D’Andra. D’Andra begins to cry, partly from being humiliated but I think it’s because she’s just realized she has to be a grown up. I felt the same way when it happened to me, D’Andra.

LeeAnne apologizes and tells D’Andra that she said that in confidence and only mentioned it because she was trying to help her, which makes absolutely zero sense. D’Andra believes LeeAnne is happy about her financial troubles and I believe D’Andra is right. Things are getting heavy when Brandi chimes in with “don’t be humiliated, I grew up in a trailer.” And it wasn’t even a double-wide. Just when I thought Cary was my favorite…

After they all hug, the smashing begins. They write things about themselves that they want to fix on a plate and start launching them into the wall. Oh, you want to know what Kameron’s is? She wants to live the simple life. OK, Paris Hilton. Brandi’s is more realistic: she wants help with her kids and can you blame her? Stephanie Hollman participated as long as she could before needing to leave, prompting Brandi to escort her out. Brandi tells Stephanie that she feels like she needs to confront LeeAnne about the whole telling D’Andra she’s worried about her being friends with Brandi thing. Stephanie tells her to do it. She does.

Brandi asks LeeAnne why she said that to D’Andra and she basically says “I never said that”, to which D’Andra replies “yes you did” and then begins the reenactment of the conversation. LeeAnne is like “oh yeah I did say that”, prompting Kameron to tell Brandi that she too believed Brandi was a bad influence on D’Andra all because D’Andra put a K-cup up her butt. This pisses Brandi off because if someone wants to put a K-cup up their butt it isn’t because Brandi made them. She then tells LeeAnne that if she feels that way maybe they shouldn’t be friends. LeeAnne tells Brandi that she hasn’t forgotten about the problems they had the year before but that doesn’t mean she doesn’t want to try to be friends, to which Brandi replies “then why would you say that?” Nothing gets resolved and instead of smashing more things, D’Andra just up and leaves.

That went well, wouldn’t you say? I could’ve told LeeAnne she couldn’t smash away the problems it looks like she’s causing. How do you think she’ll get out of this one? Comment below!

Be the first to leave Comments for Real Housewives of Dallas Recap: Smashing Friendships