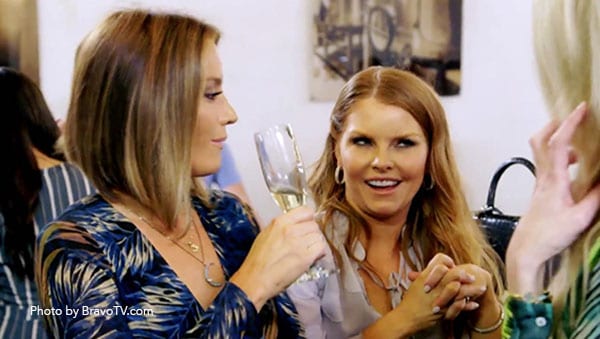 Alright, my tens of readers, listen up. I, your beloved Jenn, declare myself a Real Housewife here and now. Not because I don’t have a job. It’s because after tonight’s episode I can’t decide who I genuinely like and dislike – much like these women feel every single week.

After last week’s “smash party” debacle, Stephanie Hollman decides to plan a spa day to erase the bad memories that LeeAnne Locken’s party dredged up. Brandi Redmond arrives at her house to help plan the spa day, which basically entails interviewing models, being carried around by them while they go shirtless, and being enthralled by a baby kangaroo.

While Brandi and Stephanie are having a great time party planning, LeeAnne is having a great time of her own: she’s doing a photoshoot modeling her versatile dress. This is the dress that she’s designed that can be worn 150 ways which, for LeeAnne translates to an infinite amount of ways. 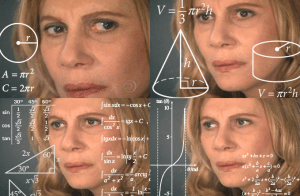 Kameron Westcoott arrives at the photoshoot to support LeeAnne, which really means she’s there to talk about the problems that arose at the smash party. LeeAnne tells Kameron that she believes D’Andra Simmons was putting on a total act when she was telling the women how upset she was at LeeAnne for telling Cary Deuber that she was broke. Kameron one-ups that and tells LeeAnne that she believes Cary plays both sides when it comes to things being said amongst their group. Then Kameron refers to herself and LeeAnne as visionaries and by that I think she means they both envision causing problems within the group.

While LeeAnne models all of the infinite ways her dress can be worn (how many times can it get washed, though?), Brandi is preparing for her own business debut: Brandiland. Yes, Brandi has developed her own clothing line and hosts a grand opening of her new shop. Cary and D’Andra ride to the event together and, upon arrival, Cary whips out a rain coat for her Burken bag. Listen, who knows what I’ll do when I’m rich. Maybe I’ll buy a rain coat for my $30 Tj Maxx purse, you don’t know.

Anyway, all of the women arrive and are impressed by Brandi’s fashions except for LeeAnne – she believes her 150 different versions of her dress are better than all of Brandi’s clothing that are actually a bunch of different fashions, completely different from LeeAnne’s dress. Things are super until Kameron decides to confront Cary about the “playing both sides” thing. They sit down to discuss Kameron’s problem; Cary asks her for an example. Do you know what that example was? THE FIGHT KAMERON HAD WITH STEPHANIE IN COLORADO. Just when you thought she was done talking about it. Cary tries to explain her side and is interrupted by Kameron asking her why she’s pointing a finger. Cary puts her finger down and tells Kameron that she believes Kameron is calling her a liar, to which Kameron basically replies “I didn’t say that about you, you’re saying that about yourself” and then she starts pointing at Cary, which Cary addresses. Just then, Stephanie walks by and is called over by Cary to settle this fight. This PISSES. Kam. Off. Kameron doesn’t think Stephanie needs to be involved, even though this is partially about her, and walks away.

In a seemingly less hostile part of Brandiland, D’Andra and LeeAnne are discussing her engagement party. LeeAnne only wants people there who can afford gifts valued at $500 or more, to which D’Andra replies “well, then I can’t go.” They start talking about the $200 thing again right as Kameron walks up. D’Andra tells LeeAnne that she was really upset at what she said, especially because it was said in front of Kameron. Why, you ask. Because D’Andra and Kameron know all of the same rich people and if they find out that D’Andra isn’t as rich as them she can’t play with them anymore. This is also the exact opposite of what D’Andra was preaching at the rodeo. LeeAnne gets emotional and apologizes for breaking D’Andra’s heart and making people think she was poor.

This somehow segue’s into Kameron CONTINUING TO TALK ABOUT THE FIGHT WITH CARY AND STEPHANIE. Cary walks up which gives the other women a chance to escape. Get this: Cary then APOLOGIZES to Kameron and tells her that she did have her back in Beaver Creek when Brandi wanted to give Kameron Stressticles, claiming she shut that joke down. These two hug it out and everything is great, until…..

Kameron tells Brandi what Cary (who is also standing next to Brandi) said about shutting down her joke. Brandi is like “that’s not true” and Cary does the nervous hug thing and is like, “yes it is.” So now, Brandi is mad.

Meanwhile, Stephanie (who, by the way, is once again my favorite – for now) is still trying to keep the peace. She tells LeeAnne about her spa day and affirms that while she will never replace Brandi as a friend, she is trying to get to know LeeAnne and form her own opinion of her. Following this exchange, Stephanie heads over to Brandi to check in on her and Brandi is wearing her sadness on her face. She tells Stephanie about the Cary/Stressticles story and is upset because it was actually she who decided not to give them to Kameron, not because Cary told her not to. Stephanie thinks her real problem is she’s trying to do to much and is overwhelmed, which Brandi agrees with since this adoption has taken over much of her life.

The next day, Stephanie’s spa day takes place and the only women who participate are Brandi, Cary and LeeAnne. LeeAnne arrives wearing a shirt that says “I’d rather be with my dog.” Same. Then she sees the baby kangaroo and is like “I’m pretty sure that’s illegal.” Also same.

Stephanie has Brandi and Cary get manicures together so they can hash out their high school fight, which is exactly what happens about 17 seconds into their manicures. Brandi tells Cary she felt like Cary’s story about the Stressticles made Brandi look like a bad influence. Ultimately, Brandi felt like she was being used so Kameron would like Cary again. Cary tells Brandi that people shouldn’t feel like she’s a bad influence, which sounds great except Kameron doesn’t like Brandi and is pretty much the one who spearheads that whole “bad influence” thing. Why doesn’t Kameron like Brandi? Kameron will tell you it started when Brandi chased her with a dildo; Brandi believes Kameron’s opinions come from LeeAnne. And guess what? Cary doesn’t keep secrets – a trait she has openly admitted to – and is now going to go tell LeeAnne what Brandi said. This is why Cary is no longer my favorite.

So on this episode we learned that Cary actually does play both sides and Brandi can think for herself. But what about Kameron? Why is she the way she is to these women? Could it be because she’s trying to be an entrepreneur and her husband doesn’t want her to do anything but be a stay-at-home mom so she needs to vent her frustrations? I don’t know, I’m not a psychologist.

What I do know is, Cary’s about to start ANOTHER fight between these women. Do you think Kameron will find a way to insert herself into it? Raise your hand if you think she’ll bring up the Colorado/Stephanie fight again! Comment below!

Be the first to leave Comments for Real Housewives of Dallas Recap: Babes in Brandiland